Greenland is known for its glaciers, but in the past month, the island has shed ice and taken on fire.

Scientists didn't expect to see Greenland melt at this rate for another 50 years: By the last week of July, the melting had reached levels that climate models projected for 2070 in the most pessimistic scenario.

The dramatic melt suggests that Greenland's ice sheet is approaching a tipping point that could set it on an irreversible course towards disappearing entirely. If that happens, catastrophic sea-level rise would swallow coastal cities across the globe.

As ice melt continues to outpace scientists' expectations, some fear that could happen more quickly than they thought.

55 billion tons of water in 5 days

The Arctic's melting season starts each year in June and ends in August, with peak melting in July. However, the scale of ice loss in Greenland this year was extraordinary. From July 30 to August 3, melting occurred across 90 percent of the continent's surface, dumping 55 billion tons of water over 5 days.

That's enough to cover Florida in almost 5 inches of water.

The melting mirrored the record-breaking ice loss seen in 2012, when almost all of Greenland's ice sheet was exposed to melting for the first time in documented history. This year, the ice started to melt even earlier than in 2012 and three weeks earlier than average, CNN reported.

This extreme melting came during the hottest month ever recorded, as an intense heat wave washed over Europe then wafted over to Greenland. Low-elevation ice began to melt and form pools across the ice sheet, and those pools' dark colours absorbed more sunlight, which further melted the glacier around them and exposed more ice to hot air.

Similarly above-average melting was observed in Switzerland – glaciers there lost 800 million tons of ice during the heat waves of June and July. Alaska also saw record sea-ice melt in July.

All that melting exposes more permafrost: frozen soil that releases powerful greenhouse gases when it thaws. That's happening faster than scientists predicted. The release of those gases leads the planet to warm even more, which accelerates more ice melt.

Last month was an anomaly for Greenland, but it could be the new normal by 2070 if humans don't curb greenhouse-gas emissions, according to climate models simulated by Xavier Fettweis, a climate researcher at the University of Liège in Belgium.

"By mid to end of the century is when we should be seeing these melt levels – not right now," Ruth Mottram, a climate scientist at the Danish Meteorological Institute, told Inside Climate News. "[The models] are clearly not able to capture some of these important processes." 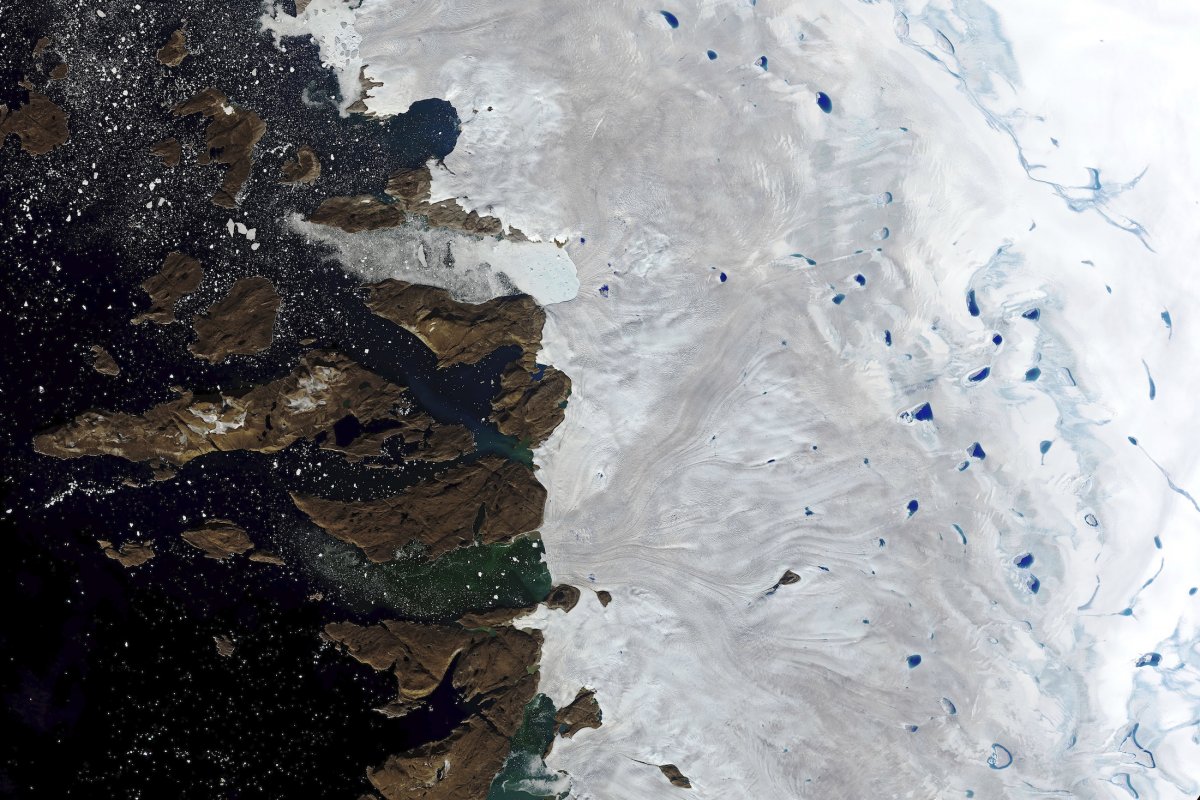 Greenland's ice melt has already raised sea levels more than 0.5 inches since 1972. Half of that occurred just in the last eight years, according to a study published in April.

At this rate, the entire Greenland ice sheet could melt within 1,000 years, causing up to 23 feet (7 metres) of sea level rise.

But Mottram isn't so sure about that projected timeline.

"Somewhere between 1.5 and 2 degrees, there's a tipping point after which it will no longer be possible to maintain the Greenland Ice Sheet," she told Inside Climate News.

"What we don't have a handle on is how quickly the Greenland Ice Sheet will be lost."

Greenland's ice is already approaching that tipping point, according to a study published in May.

Whereas melting during warm cycles used to get balanced out by new ice forming during cool cycles, warm periods now cause significant meltdown and cool periods simply pause it.

That makes it difficult for the ice sheet to regenerate what it's losing.

Unprecedented fires have also burned across the Arctic The warm, dry weather that caused the ice to melt also set the stage for wildfires in Greenland.

Satellites first detected a wildfire near Sisimiut area on July 10. Temperatures in the region at the time approached 68 degrees Fahrenheit (20 degrees Celsius); the normal daily high is 50 degrees (10 degrees Celsius).

The fires may have been started by a hiker using an outdoor oven.

This was the first fire of its size since another large one in the same area surprised scientists in August 2017. That fire blazed for two weeks.

Unprecedented wildfires also raged across the Arctic this summer, releasing 50 megatons of carbon dioxide into the atmosphere in June alone. That's the equivalent of Sweden's annual emissions, and more carbon than Arctic fires released during every month of July from 2010 to 2018 combined, according to the Copernicus Atmosphere Monitoring Service (CAMS).

CAMS tracked over 100 "intense and long-lived" wildfires in the Arctic Circle over six weeks in June and July. Those fires spread farther, burned more intensely, and lasted longer than normal.

Fires in Alaska and Siberia also deposited soot on Greenland's ice sheet, which darkened the surface and caused it to absorb more heat, which leads to faster melting.

"It is unusual to see fires of this scale and duration at such high latitudes in June," Mark Parrington, a CAMS wildfire expert, said in a release.

"But temperatures in the Arctic have been increasing at a much faster rate than the global average, and warmer conditions encourage fires to grow and persist once they have been ignited."

The Arctic is warming almost twice as quickly as the global average.

On the other end of the globe, Antarctica's melt is also accelerating. The continent has lost 252 billion tons of ice per year in the last decade. That's just a hair behind Greenland, which is losing an average 286 billion tons per year.

Together, Greenland and Antarctica hold more than 99 percent of the world's fresh water in their ice sheets, according to the National Snow and Ice Data Center. If both were to melt entirely, the state of Florida would disappear.

According to a map from National Geographic, cities like Amsterdam, Netherlands; Stockholm, Sweden; Buenos Aires, Argentina; Dakar, Senegal; and Cancun, Mexico (to name just a few) would also vanish.