It's not a particularly pleasant thing to think about, but infanticide is a way of life for many mammal species. From the mouse to the lion, baboons and lemurs and bears, instances of males killing the young males around them are oddly frequent, especially in social groups led by just one or a few males. But why?

It's a question that's confounded scientists for decades because it doesn't seem to make sense to weaken your own social group by periodically killing - and sometimes eating - its youngest members. One theory was that the dominant males were killing off the young males to free up the females to produce more of their babies. This would ensure the longevity of their genes, which is perhaps the strongest of all evolutionary pressures.

To test this theory, Dieter Lukas from the University of Cambridge in the UK and Elise Huchard from the University of Montpellier in France reviewed infanticidal behaviour in more than 200 mammal species. They found that in species where dominant males were killing off babies to get more time with the females, their reign as top dog is typically short-lived. Soon enough, an even tougher male would muscle in and take his place.

"The males don't manage to stay dominant for very long, so when they can mate with the females, they need to do it as quickly as possible," Huchard told Catherine Brahic at New Scientist. "It's not in their interest to wait for the females to finish rearing infants."

But it's not all dead babies and epic battles for male dominance - it looks like the females have figured out how to combat this behaviour by adopting a life of promiscuity. And not only has the move has shifted the battlefield away from the babies, but it's prompted some species to abandon infanticide altogether.

Lukas and Huchard found that promiscuity was a super-effective counter-strategy because if a female frequents as many sexual partners as she can in a short period of time, no one can really be sure whose baby is whose. And no male is dumb enough to risk accidentally killing off his own offspring - and genes - just to give himself another opportunity to produce more offspring (which he might then accidentally kill).

But an evolutionary arms race is never really won. The researchers suspect that the males are combatting the females' promiscuity by developing their own counter-strategy - bigger testicles. If a male can't compete with another male by killing off his offspring, he can win the battle before the offspring have even been formed, because bigger testicles mean more sperm to compete for access to the female's eggs. This is particularly apparent in the little Madagascan mouse lemur (pictured below), whose testicles swell five to 10 times their normal during the breeding season.

"In species in which infanticide occurs, testis size increases over generations, suggesting that females are more and more promiscuous to confuse paternity," said Lukas in a press release.

The team published the results in the journal Science.

Both the females' and the males' tactics appear to be working, as Brahic reports at New Scientist. Huchard and Lukas found that infanticide can be completely phased out of species where the males have evolved large testicles. "Bonobos, for instance, appear to have lost infanticide since they diverged from chimps," she says. 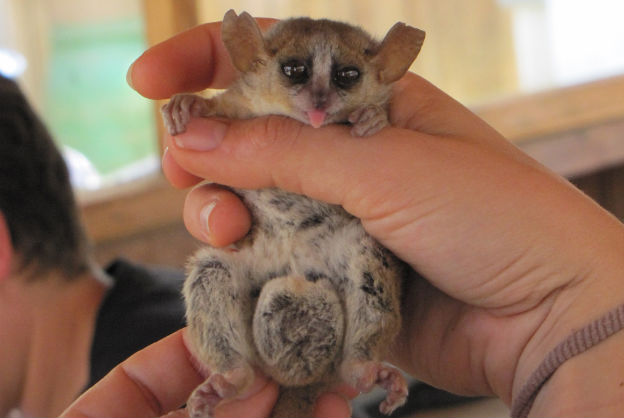