A 2-inch-long (5 centimeters) spider thought to be extinct in Great Britain is actually alive and thriving on a British military base.

A program manager at the Surrey Wildlife Trust rediscovered the great fox-spider (Alopecosa fabrilis) on an undeveloped portion of a military installation in Surrey, England, after a two-year search. The last time the spider was seen before this in Britain was in 1993, or 27 years ago.

"It's a gorgeous spider, if you're into that kind of thing," the program manager Mike Waite told The Guardian.

The great fox-spider is a wolf spider, a family of arachnids that hunts down its prey rather than building webs. The spider is nocturnal, which makes it an elusive quarry for spider enthusiasts.

According to The Guardian, Waite used aerial photography of the military installation to find bare patches where the spiders like to hunt. His search in these sandy spots paid off after many fruitless nights.

"As soon as my torch fell on it I knew what it was. I was elated," Waite said. "With coronavirus, there have been lots of ups and downs this year, and I also turned 60, so it was a good celebration of that."

Waite found several male spiders, one female and possibly some immature spiderlings, though the latter were difficult to identify conclusively.

The adult spiders have gray-and-brown furry bodies. They can spin silk, but instead of making webs, they use that silk to line the burrows that they dig in order to hibernate over the winter. Great fox-spiders are critically endangered, but they are also found on the European mainland, particularly on coastal sand dunes in Holland and Denmark, according to The Guardian.

Waite wonders whether the spiders are also quietly surviving on Britain's coastlines.

"It makes me think how hard have we looked for it on our coasts? Have we been looking hard enough?" he told The Guardian. 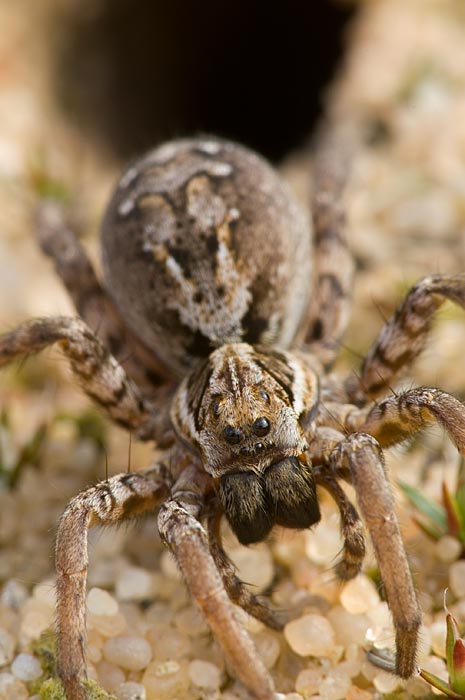 The Surrey Wildlife Trust manages thousands of acres of undeveloped land in the Surrey area to protect wildlife. Ministry of Defence sites are also prime real estate for animals, because they're left relatively undisturbed other than the military training exercises that occur there.

For security reasons, the researchers are keeping confidential the identity of the site where they found the great fox-spiders, but it consists of scrubby heartland that also provides a home for native birds, snakes, lizards and butterflies.

"Many people are unaware of the size and diversity of the Defence estate and its tremendous wildlife richness," Rich Lowey, the head of technical services at the Defense Infrastructure Organization, said in a statement.

"It has generally been protected from agricultural intensification and urban development, so it now provides a vital sanctuary for many of the country's most rare and endangered species and habitats."

Waite now plans to continue his survey for the spiders in order to estimate the size of their population.