The last thing the world needs now is more bad news, but unfortunately we can't ignore the fact that, after yet another mass bleaching event, scientists are now admitting Australia's Great Barrier Reef is in a "terminal stage".

After a record-hot Australian summer, the latest surveys reveal that two-thirds of the Great Barrier Reef has now been damaged by severe coral bleaching – less than 12 months after 93 percent of it experienced bleaching in 2016. This year, the damage has spread further south.

Researchers estimate that it would take even the fastest growing coral about a decade to recover - but that would require a year or two without any bleaching to give the corals an opportunity to regrow.

"This is the fourth time the Great Barrier Reef has bleached severely – in 1998, 2002, 2016, and now in 2017. Bleached corals are not necessarily dead corals, but in the severe central region we anticipate high levels of coral loss," said one of the researchers, James Kerry from James Cook University's ARC Centre of Excellence for Coral Reef Studies.

"It takes at least a decade for a full recovery of even the fastest growing corals, so mass bleaching events 12 months apart offers zero prospect of recovery for reefs that were damaged in 2016."

Coral bleaching occurs when water temperatures get so warm that corals stress out and eject the beautiful vibrant, symbiotic algae that live in their tissue, providing them colour and food in exchange for a home.

Without that algae, the coral turns bone white and begins to starve, leaving them vulnerable to destruction.

You can see what that looks like in footage from the latest aerial survey below (warning: this made us want to cry):

Without doubt the most confronting research project I've ever done. Please act NOW to save the #GreatBarrierReef from climate change. pic.twitter.com/rVujRxoPeD

The only positive news from this year's reef survey is that it was the middle third of the reef – rather than the fragile northern third – that was worst affected this year. And the southern third appears to be unscathed.

Still, James Cook University water quality expert, Jon Brodie, who wasn't involved in the study, told Christopher Knaus and Nick Evershed over at The Guardian that the reef was now in a "terminal stage".

"We've given up," said Brodie, referring to inaction on the part of the Australian government. "It's been my life managing water quality, we've failed."

"I showed the results of aerial surveys of bleaching on the Great Barrier Reef to my students, and then we wept," lead researcher Terry Hughes, tweeted after last year's results.

You can see the devastation this year compared to last year (right) in the maps below, with the damage this year spreading 500 km (311 miles) further south: 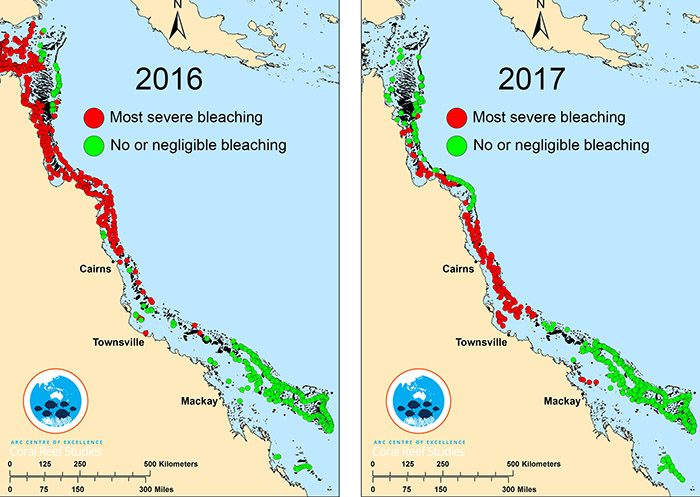 Things are especially bad this year because, coupled with the 2017 mass bleaching event, Tropical Cyclone Debbie also hit a section of the Great Barrier Reef in March, causing damage along a path up to an estimated 100 km (62 miles) wide – "which unfortunately struck a section of the reef that had largely escaped the worst of the bleaching," a press release explains.

While the cyclone did bring cooler water with it, the team explained that the benefits of this were negligible in relation to the damage it caused.

It's easy to despair the fact that most of our children will no longer get the chance to see the Great Barrier Reef with their own eyes.

But perhaps it's better to focus on what we can do to protect the remaining sections of the reef, and prevent this from happening to other coral reefs around the world.

"Clearly the reef is struggling with multiple impacts," explains Hughes.

"Without a doubt the most pressing of these is global warming. As temperatures continue to rise the corals will experience more and more of these events: 1°C of warming so far has already caused four events in the past 19 years."

"Ultimately, we need to cut carbon emissions, and the window to do so is rapidly closing," he added.

World, if you're waiting for a wake up call, this is it.

The results of the latest survey are yet to be published, but the 2016 bleaching event has been reported in the journal Nature.