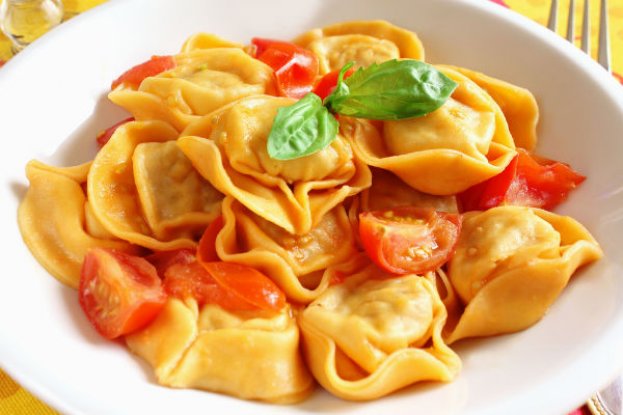 Reheating Your Pasta Makes It Significantly Better For You

When pasta is cooled down, your body digests it differently, causing fewer calories to be absorbed and a smaller blood glucose peak. And reheating it is even better - it reduces the rise in blood glucose levels by a whopping 50 percent.

Most of us are aware that pasta isn’t the most slimming meal around, but it’s too delicious to avoid. It sounds like complete nonsense, but does simply letting your pasta cool down before reheating it make it less fattening? Michael Mosley from BBC News decided to investigate.

The reason pasta is so fattening is that it’s a form carbohydrate, and when carbohydrates are digested in your stomach, they're broken down and absorbed as simple sugars. These sugars cause your blood glucose levels to sky-rocket, and this prompts an influx of insulin from the pancreas as the body tries to even everything out again.

If the insulin has done its job properly, the sudden rise in blood glucose will fall just as quickly, and once this happens, guess what? You’re hungry again. This is why nutritionists have been pushing wholemeal and multi-grain varieties of bread over white bread, because being very high in fibre, they promote a slower and more gradual release of glucose into our blood streams.

But is there a way to alter the pasta you’ve just cooked to make your body digest it more like fibre? Mosley looked into the results of an experiment that was carried out in a recent episode of the BBC 2 series, Trust Me, I'm a Doctor, and found that cooking pasta and then cooling it down changes its structure so it becomes a form of 'resistant starch’.

Unlike carbohydrates, resistant starch resists digestion by the enzymes in our stomachs - and the sudden highs and lows of blood glucose that result from it - and instead continues travelling to the large intestine, where it acts more like dietary fibre.

This means that if you cook some pasta and let it cool down, your body will digest it like it’s fibre instead of carbohydrates, Denise Robertson, senior lecturer in nutritional physiology at the University of Surrey in the UK, told Mosley at BBC News. In fact, it will end up "creating a smaller glucose peak and helping feed the good bacteria that reside down in your gut. You will also absorb fewer calories, making this a win-win situation,” says Mosley.

So okay, cold pasta is better for you, but let’s be honest, 99 percent of the time, warm pasta tastes better. So does the situation change when you reheat cold pasta?

Chris van Tulleken from Trust Me, I'm a Doctor and the University College London got some volunteers to take part in an experiment. For three full days, spread out over several weeks, they had to eat freshly cooked, cold, and reheated pasta with tomatoes and garlic, and always on an empty stomach. On each of these days, they gave a blood sample every 15 minutes for two hours as they digested their pasta meals, so van Tulleken and his team could monitor and compare the growth of their blood glucose levels.

"Just as expected, eating cold pasta led to a smaller spike in blood glucose and insulin than eating freshly boiled pasta had. But then we found something that we really didn't expect - cooking, cooling and then reheating the pasta had an even more dramatic effect. Or, to be precise, an even smaller effect on blood glucose. In fact, it reduced the rise in blood glucose by 50 percent. This certainly suggests that reheating the pasta made it into an even more 'resistant starch'. It's an extraordinary result and one never measured before.”

Robertson is now working on Diabetes UK-funded research to look into how different types of food can be altered to act more like resistant starch, and reduce reactions in the blood that are seen in diabetics.