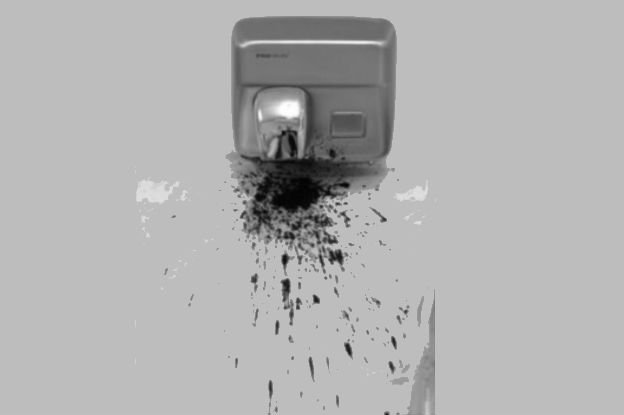 Here's How Much Bacteria Hand Dryers Are Spreading

Led by researchers at the University of Leeds in the UK, new research has revealed that both high-powered ‘jet-air’ hand dryers and warm air hand dryers actively spread bacteria into the air and onto the hands of users in public bathrooms.

The team, led by microbiologist Mark Wilcox of the School of Medicine, coated volunteers’ hands in harmless  Lactobacilli to see how poorly washed, contaminated hands could spread bacteria as they were dried. Across 120 air-sampling tests (60 tests and 60 controls), the results showed that jet air dryers - newish technology that blows air out of the unit at speeds of around 640 km/h - spread 4.5 times more airborne bacteria than paper towels. Out-dated but still widely used warm air dryers were even worse - spreading 27 times more bacteria than paper towels.

The researchers also performed another experiment where they coated the hands of their volunteers in paint to see how far the droplets of contaminated water would fall. You can see the results in the image above.

"Next time you dry your hands in a public toilet using an electric hand dryer, you may be spreading bacteria without knowing it. You may also be splattered with bugs from other people's hands,” said Wilcox in a press release. "These findings are important for understanding the ways in which bacteria spread, with the potential to transmit illness and disease.”

Of course, as Matt Connolly points out at Mic, this wouldn’t be an issue if people washed their hands properly in the first place to remove all the bacteria, but we’re often in such a rush, we don’t take the time to do so.

"These results suggest that air dryers may be unsuitable for use in healthcare settings, as they may facilitate microbial cross-contamination via airborne dissemination to the environment or bathroom visitors,” the researchers conclude in their paper, published in the Journal of Hospital Infection.

But a spokesman for jet-air hand dryer manufacturer, Dyson, told Sarah Knapton at The Telegraph, “This research was commissioned by the paper towel industry and it's flawed. They have tested glove-covered hands, which have been contaminated with unrealistically high levels of bacteria, and not washed."

Wilcox responded by saying the European Tissue Symposium "played no part in the results analysis".

Here’s what AsapSCIENCE have to say on the matter: