Up to half the calcium in the Universe – and that includes our bones and teeth – is thought to come from exploding supernova stars, and researchers have now been able to get unprecedented insight at how these ultra-rare, calcium-rich supernovae reach the end of their lives.

The never-before-seen look at how these stellar explosions throw out so much calcium was carried out using deep space X-ray and infrared imaging, and fills in quite a few of the gaps in our scientific knowledge about the process.

Drawing together contributions from 67 authors across 15 countries, the resulting study suggests that the calcium-rich supernovae start off as compact stars that quickly lose mass at the end of their lives, giving off an outer layer of gas that exploding materials then collide with. 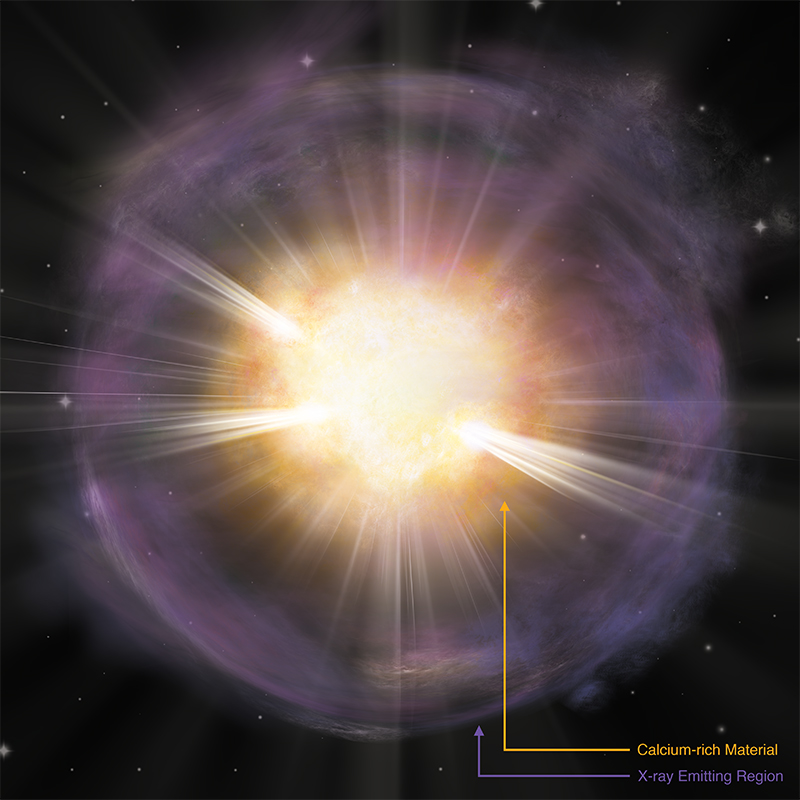 "These events are so few in number that we have never known what produced calcium-rich supernovae," says astrophysicist Wynn Jacobson-Galan, from Northwestern University.

"By observing what this star did in its final month before it reached its critical, tumultuous end, we peered into a place previously unexplored, opening new avenues of study within transient science."

The supernova in question, SN 2019ehk, was first spotted by amateur astronomer Joel Shepherd in the Messier 100 (M100) spiral galaxy about 55 million light-years away from Earth. Very soon after the discovery was made, most of Earth's major telescopes were following it – with transient events like this, speed is crucial.

What astronomers weren't expecting was the luminosity of the X-ray light that SN 2019ehk was giving off. Scientists quickly realised they were looking at a flood of high-energy X-rays flowing from the star and hitting the outer shell of gas, providing key clues to the materials that it was shedding and how much of the material there was.

The readings from the dying star helped scientists to work out what was happening: the reactions between the expelled materials and the outer gas ring were producing intensely hot temperatures and high pressures, leading to a calcium-producing nuclear reaction as the star tries to shed its heat and energy as quickly as possible.

"Most massive stars create small amounts of calcium during their lifetimes, but events like SN 2019ehk appear to be responsible for producing vast quantities of calcium and in the process of exploding disperse it through interstellar space within galaxies," says astronomer Régis Cartier, from the National Optical-Infrared Astronomy Research Laboratory (NOIRLab) in the US.

"Ultimately this calcium makes its way into forming planetary systems, and into our bodies in the case of our Earth!"

It's because these stars are so important in calcium production that scientists have been so keen to take a look at them – something that has proved difficult (even Hubble missed SN 2019ehk). The explosion at the centre of the new study is responsible for the most calcium ever seen emitted in a singular observed astrophysical event.

Being able to see the inner workings of this type of supernova will open up new areas of research and give us a better idea of how the calcium in our bones and teeth – and everywhere else in the Universe – came to be.

It's also a great example of the international scientific community working together to capture and record something of great importance. Just 10 hours after the initial bright burst was spotted in the sky by Joel Shepherd, some of the best telescopes we have were ready to record what happened next.

"Before this event, we had indirect information about what calcium-rich supernovae might or might not be," says astrophysicist Raffaella Margutti, from Northwestern University. "Now, we can confidently rule out several possibilities."