Earlier this year, I came across a striking image of a lion undergoing a Computerized Axial Tomography scan (or CAT scan, also known as a CT scan). I tweeted out the image, and it got over 2,000 retweets. People were intrigued, and so was I, so I dug into the back-story of how the lion ended up there.

The photo, taken in 2005, depicts a then-two-year-old baby Barbary lion named Samson. Barbary lions, also referred to as Atlas lions, are the largest lion subspecies, known to populate large portions of North Africa. Zoo keepers noticed that Samson, who lived in the Hai-Kef zoo near Tel Aviv with his sister Delilah, had suddenly stopped being able to walk. At the time, Samson was suffering from what would later be diagnosed as a rare and life-threatening problem.

After the zoo had veterinary neurological specialist Merav Shamir from Israel's Koret School of Veterinary Medicine examine Samson, Shamir observed that the lion "stood on his legs with difficulty".

"When he tried to walk, he fell after a few steps," noted Shamir. "He also had no appetite and appeared generally to be in poor condition."

So Shamir decided to do a neurological exam, which included a thorough study of Samson's nervous system. It was then that she diagnosed the lion as suffering from "damage to the posterior portion of his skull, which applied pressure on his cerebellum and the upper sector of the spinal cord".

In other words, the cause of Samson's trouble was in his skull. It had grown abnormally, putting unnecessary stress on the part of his brain which is vital to carrying out motor functions.

The images above, from a study Shamir coauthored, show a healthy lion skull (A) and an abnormal lion skull (B). The abnormal skull shows a malformation that's very similar to the one Samson had. As you can see, the foramen magnum - the hole in the base of the skull through which the spinal cord passes - is unobstructed in image A.

Image B shows an abnormal bone growth (identified with an asterisk) protruding down from the roof of the foramen magnum.

After a CAT scan confirmed Samson's diagnosis, Shamir's team prepared for surgery. "We decided to carry out this operation that had never before been performed anywhere," Shamir told Hebrew University of Jerusalem. The 6-hour operation began after Samson was temporarily put to sleep with an anaesthetic.

According to The Telegraph, Shamir's team shaved part of Samson's mane and then used a drill to "remove part of the thickened skull tissue, some of which had become deeply embedded in the animal's brain". 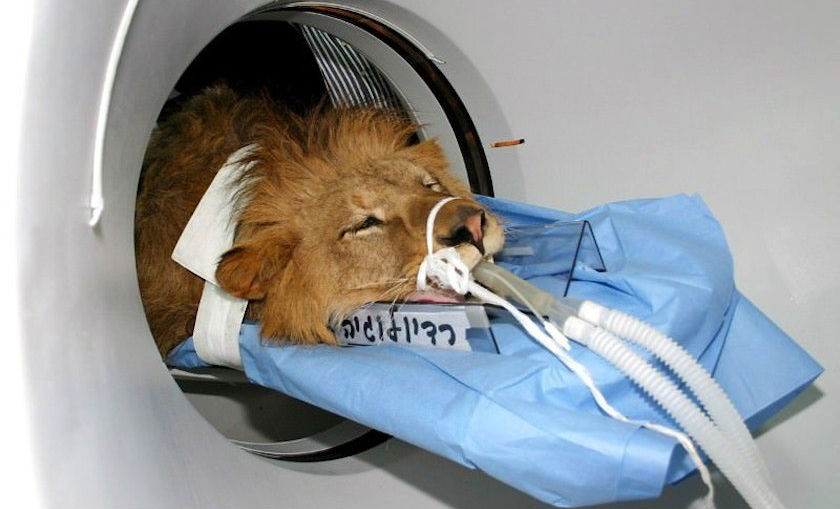 The Koret School of Veterinary Medicine

"We were working in the dark really," Shamir told The Telegraph. "It is difficult when you are not really sure of the anatomy and in this case the anatomy was abnormal."

The impressive operation was successful. Within 10 days, Samson was reunited with his sister Delilah at the zoo and was walking without stumbling. Shamir thinks malformations like the one that caused Samson's symptoms could be caused by a poor diet or other factors from captivity. "Samson is walking around as a fully healthy lion, and our final worry is that the impressive mane which covered his head before the operation will return and cover any traces of our surgical work," Shamir said. Samson with his haircut. The Koret School of Veterinary Medicine