Will The New Coronavirus Mutation Affect The Vaccine? Here's What You Need to Know

The emergence of a new variant of coronavirus has sparked renewed interest in the part of the virus known as the spike protein.

The new variant carries several peculiar changes to the spike protein when compared to other closely related variants – and that's one of the reasons why it's more concerning than other, harmless changes to the virus we have observed before. The new mutations may alter the biochemistry of the spike and could affect how transmissible the virus is.

The spike protein is also the basis of current COVID-19 vaccines, which seek to generate an immune response against it. But what exactly is the spike protein and why is it so important?

In the world of parasites, many bacterial or fungal pathogens can survive on their own without a host cell to infect. But viruses can't. Instead, they have to get inside cells in order to replicate, where they use the cell's own biochemical machinery to build new virus particles and spread to other cells or individuals.

Our cells have evolved to ward off such intrusions. One of the major defences cellular life has against invaders is its outer coating, which is composed of a fatty layer that holds in all the enzymes, proteins and DNA that make up a cell.

Due to the biochemical nature of fats, the outer surface is highly negatively charged and repellent. Viruses must traverse this barrier to gain access to the cell.

Like cellular life, coronaviruses themselves are surrounded by a fatty membrane known as an envelope. In order to gain entry to the inside of the cell, enveloped viruses use proteins (or glycoproteins as they are frequently covered in slippery sugar molecules) to fuse their own membrane to that of cells' and take over the cell.

The spike protein of coronaviruses is one such viral glycoprotein. Ebola viruses have one, the influenza virus has two, and herpes simplex virus has five.

The architecture of the spike

The spike protein is composed of a linear chain of 1,273 amino acids, neatly folded into a structure, which is studded with up to 23 sugar molecules. Spike proteins like to stick together and three separate spike molecules bind to each other to form a functional "trimeric" unit.

The spike can be subdivided into distinct functional units, known as domains, which fulfil different biochemical functions of the protein, such as binding to the target cell, fusing with the membrane, and allowing the spike to sit on the viral envelope.

The spike protein of SARS-CoV-2 is stuck on the roughly spherical viral particle, embedded within the envelope and projecting out into space, ready to cling on to unsuspecting cells. There are estimated to be roughly 26 spike trimers per virus. 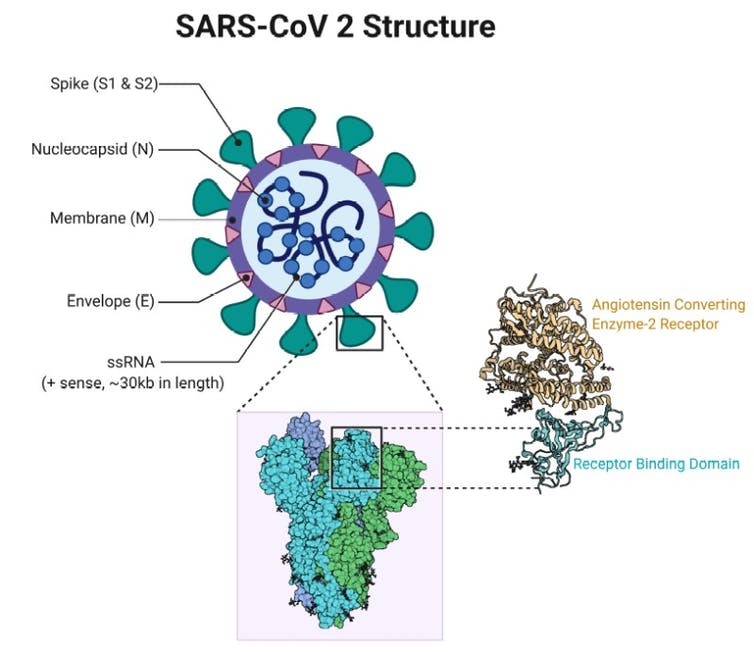 The spike protein is made up of different sections that perform different functions. (Rohan Bir Singh, CC BY)

One of these functional units binds to a protein on the surface of our cells called ACE2, triggering uptake of the virus particle and eventually membrane fusion. The spike is also involved in other processes like assembly, structural stability and immune evasion.

Given how crucial the spike protein is to the virus, many antiviral vaccines or drugs are targeted to viral glycoproteins.

For SARS-CoV-2, the vaccines produced by Pfizer/BioNTech and Moderna give instructions to our immune system to make our own version of the spike protein, which happens shortly following immunisation. Production of the spike inside our cells then starts the process of protective antibody and T cell production.

One of the most concerning features of the spike protein of SARS-CoV-2 is how it moves or changes over time during the evolution of the virus. Encoded within the viral genome, the protein can mutate and changes its biochemical properties as the virus evolves.

Most mutations will not be beneficial and either stop the spike protein from working or have no effect on its function. But some may cause changes that give the new version of the virus a selective advantage by making it more transmissible or infectious.

One way this could occur is through a mutation on a part of the spike protein that prevents protective antibodies from binding to it. Another way would be to make the spikes "stickier" for our cells.

This is why new mutations that alter how the spike functions are of particular concern – they may impact how we control the spread of SARS-CoV-2. The new variants found in the UK and elsewhere have mutations across spike and in parts of the protein involved in getting inside your cells.

Experiments will have to be conducted in the lab to ascertain if – and how – these mutations significantly change the spike, and whether our current control measures remain effective.