Experts Are Warning People Not to Wash Their Chicken. Here's Why It's So Dangerous

Slimy raw chicken collects who-knows-what in its goo during its journey into our kitchens. So it makes sense to give it a rinse before cooking, right? Wrong.

A new report from the US Department of Agriculture (USDA) and North Carolina State University backs what researchers have known for a while now - washing raw chicken meat increases your risk of food poisoning.

Raw chicken is often contaminated by dangerous bacteria such as Salmonella, Campylobacter and Clostridium perfringens. Foodborne illnesses, like those caused by these pesky microbes, strike one in six Americans every year according to the CDC.

But giving raw chicken a rinse doesn't eliminate these pathogens - that's what cooking is for. Washing the chicken just allows these dangerous microorganisms to spread, potentially by hitching a watery ride through spray, sponge or utensil.

"Even when consumers think they are effectively cleaning after washing poultry, this study shows that bacteria can easily spread to other surfaces and foods," explained USDA Deputy Under Secretary for Food Safety Mindy Brashears.

Researchers recruited 300 participants to prepare a meal involving chicken thighs and salad, dividing them into two groups. One group was provided with email instructions on how to safely prepare chicken, including: not washing it, preparing raw meats on a different chopping board to other foods and effective hand washing techniques.

But the control group was sent to work in the university's test kitchens without receiving this knowledge.

All participants had admitted to chicken washing in the past, citing habit, slime removal or because a family member does it, as some of their reasons why. Unbeknownst to them, the researchers spiked the chicken thighs with a harmless but trackable strain of E. coli.

The email advice proved effective when it came to chicken washing, with 93 percent of those who'd received the safety instructions not washing their chicken. But 61 percent of the control group did and this is what their sinks looked like even after they thought they'd cleaned them: 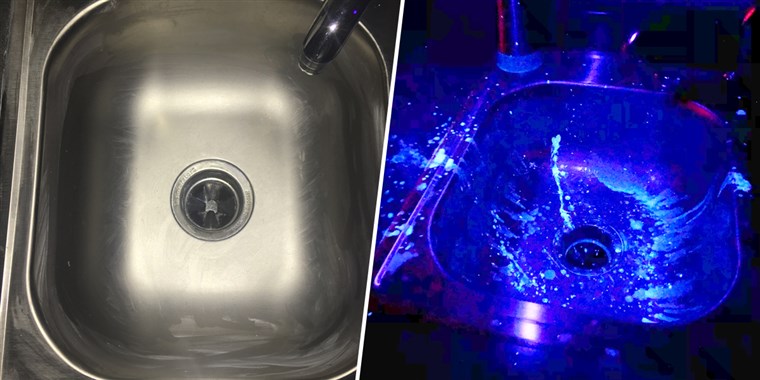 Of those chicken washers, 26 percent ended up with E. coli in their salad.

But researchers were surprised to find just how much bacteria still spread, even when people avoided washing their chicken. Of the people who didn't wash their chicken, 20 percent still ended up with E. coli in their salad.

They suspect this was due to participants not decontaminating hands, surfaces and utensils correctly and suggest the following meat preparing safety tips:

"Washing or rinsing raw meat and poultry can increase your risk as bacteria spreads around your kitchen," cautioned Carmen Rottenberg, Administrator of USDA's Food Safety and Inspection Service.

"But not washing your hands for 20 seconds immediately after handling those raw foods is just as dangerous."

You can read the full report here.