Here's Why We Tend to See Faces Everywhere We Look, According to Science

We know that our minds can imagine faces everywhere there's a hint of two eyes and a nose – from cloud formations to car bonnets to plug sockets – and it's technically known as face pareidolia. A new study gives us insight into what's actually going on in the brain when this happens.

Scientists wanted to know whether the brain processes these imagined faces in the same way as real human faces – and it turns out there are some similarities in how we perceive and interpret them.

The research suggests that false faces found through pareidolia are assessed in the same way as a real face would be. Somehow, the same neural circuitry is involved in figuring out what a face is doing, even though we know that what we're looking at in a tree stump or a TV remote isn't a real face.

"We know these objects are not truly faces, yet the perception of a face lingers," says psychologist David Alais, from the University of Sydney in Australia.

"We end up with something strange: a parallel experience that it is both a compelling face and an object. Two things at once. The first impression of a face does not give way to the second perception of an object."

Alais and his colleagues asked 17 volunteers to look at a series of dozens of illusory and human faces, repeated several times over, then rate the strength of emotion in each one through the same computer software. 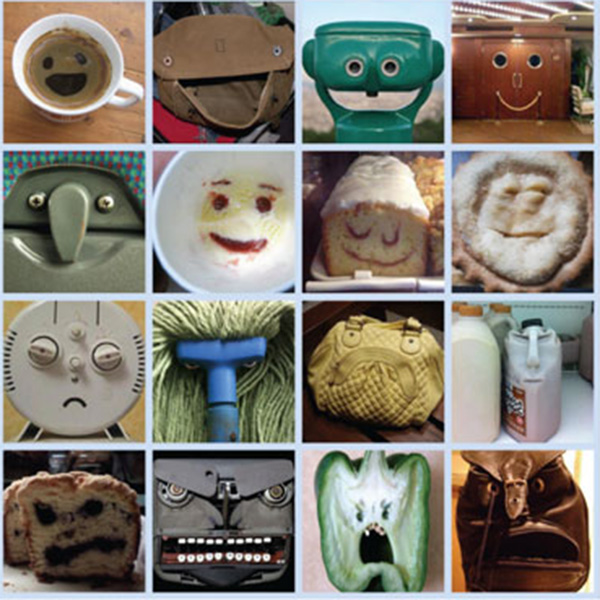 Sample of the images used. (Taubert et al, Proceedings of the Royal Society B, 2021)

In other words, a succession of happy faces makes us more likely to see the next one as happy as well. That this bias was observed in both real and illusory faces suggests the brain is processing them in a similar way, and using similar neural networks.

"Pareidolia faces are not discarded as false detections but undergo facial expression analysis in the same way as real faces," says Alais.

"We need to read the identity of the face and discern its expression. Are they a friend or a foe? Are they happy, sad, angry, pained?"

The researchers point to the importance of facial expressions as social communication as the reason for why our brains are constantly recognizing faces and assessing their expressions.

It helps us determine what sort of situation we're in, and what to do next, which is why our brains have learned to do it so quickly, and with so little information (just a hint of two eyes and a nose, perhaps).

Previous research into face pareidolia shows certain biases that can affect our brains when it comes to human faces can apply to imagined faces too – backing up this idea that a face doesn't have to be real for higher-level sensory mechanisms in visual processing to be activated.

Considering that pareidolia faces can be so varied and subtle – of all shapes and sizes and materials, unlike human faces – the brain is doing an impressive job at processing these visual signals so quickly. It seems that when it comes to faces, the brain will risk a few false positives if it means speedily assessing faces and their expressions.

"When objects look compellingly face-like, it is more than an interpretation: they really are driving your brain's face detection network," says Alais.

"And that scowl, or smile; that's your brain's facial expression system at work. For the brain, fake or real, faces are all processed the same way."