Welcome to the latest optical illusion that has the internet in meltdown right now. Give it a try - look at the image above, and try to see all 12 black dots arranged on the grey grid.

You’ll soon find that it’s impossible to see all black dots at the same time, because the moment you focus on one row, another row will mysteriously disappear from view.

Tweeted yesterday by game developer Will Kerslake, the illusion is known as a Scintillating Grid Illusion, so-called because the dots appear to twinkle in and out of view like stars in the night sky.

So why would our eyes try to trick us like this?

There are twelve black dots at the intersections in this image. Your brain won’t let you see them all at once. pic.twitter.com/ig6P980LOT

First discovered in the 1990s, the Scintillating Grid Illusion takes advantage of a neural process called lateral inhibition, which describes how an excited neuron in the brain tends to reduce the activity of its neighbours.

It might sound pretty counterintuitive, but it means that neighbouring neurons actually respond less if they’re activated at the same time than if one is activated alone.

This can occur not just in things you see, but also in things you touch and hear - the fewer neighbouring neurons that are stimulated, the more strongly a neuron responds.

If it seems like all this 'inhibiting of neurons' adds up to a disadvantage - in this particular situation, it’s preventing us from seeing all 12 black dots at once - it actually ends up giving us more visual information than less.

As researchers from Indiana University Bloomington explain, the process greatly increases your visual system's ability to respond to edges of a surface:

You can see this in effect even more strongly in the example below: 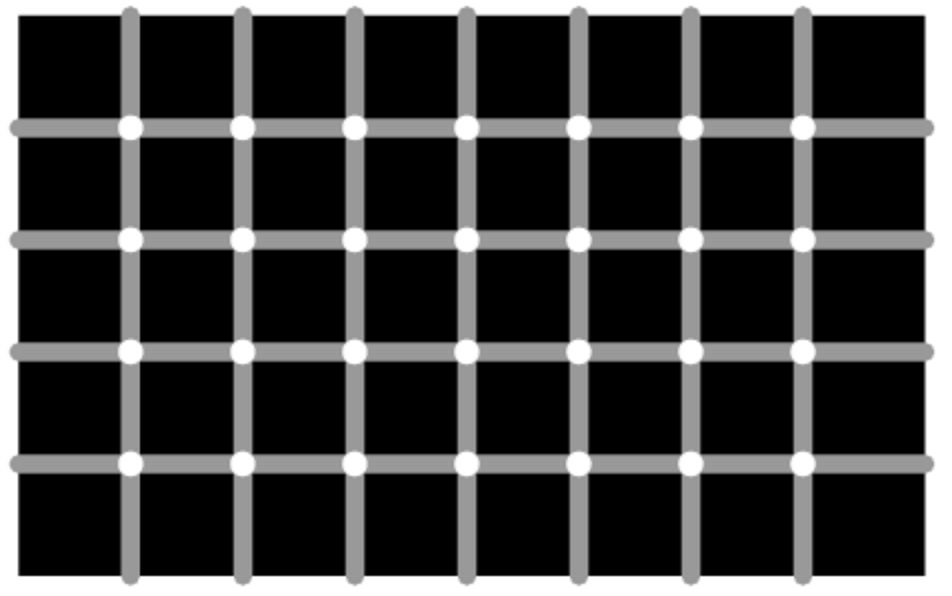 If you scan across the grid and try to view all the white dots, you’ll soon see a bunch of black dots instead, as different neurons activate and become inhibited depending on where you look.

And, oddly enough, you can reduce this effect slightly by cocking your head at a 45 degree angle, and eliminate it altogether by moving your face either very close or very far away from the image.

If you want more of these to melt your brain with, the Scintillating Grid Illusion is actually a modern version of a much older optical illusion - the Hermann Grid Illusion, discovered back in the 1800s.

Instead of things disappearing, the Hermann Grid tricks your brain into seeing something that isn’t really there. If you look at the example below, you’ll see the grid produces the illusion of grey spots in the white area between the black squares: 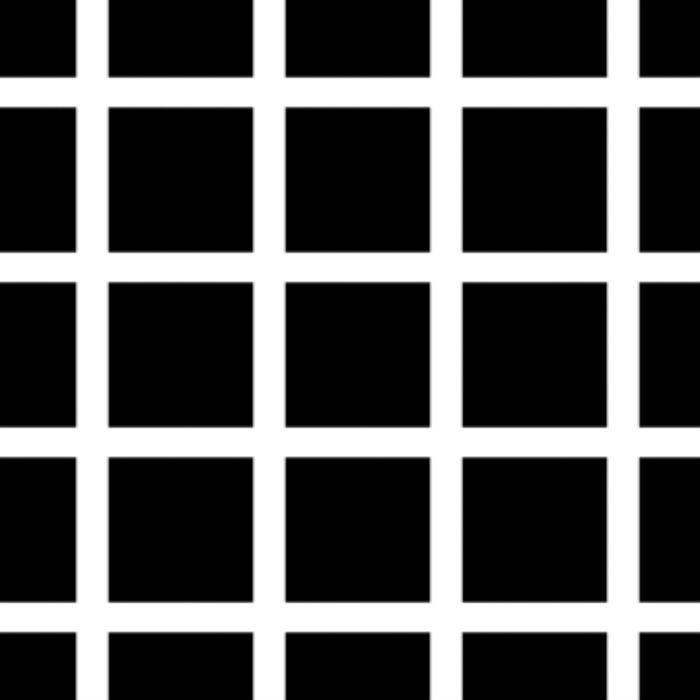 The Scintillating Grid Illusion was designed to try and 'cancel out' the Hermann Grid effect, but if you look really closely in the illusion above, you might be able to make out faint white squares where the grey lines meet, but not on the grey lines that aren’t intersecting.

As Rachel Becker explains for The Verge, this happens because retinal ganglion cells - a type of neuron located near the inner surface of the retina in your eye - detect contrasts.

"Because there’s less contrast at these intersections with more grey than white, the brain thinks the dot where all the grey lines intersect is lighter than the rest of the grey line, and creates the illusion of a faint white square," she says.

So there you have it: the science behind that goddamn grid.

And if your brain doesn't hurt enough already, find out more about the science of optical illusions in the BrainCraft video below.