Environment30 May 2019
By David Nield

Deep below the frozen wastelands of Antarctica, scientists have discovered ancient tectonic plate structures that are having a huge impact on melting patterns around the continent's largest ice shelf.

The hidden rock, in place for hundreds of millions of years, is controlling water flow around the gigantic Ross Ice Shelf. This shelf currently acts as a crucial buffer preventing more of Antarctica's ice floating out into the wider ocean.

Researchers detected said rock thanks to observations carried out by the IcePod, a dedicated scanning system which measures ice shelf height, thickness and internal structure, and the magnetic and gravity signals of the underlying rock.

Essentially, the IcePod can peer through hundreds of metres (thousands of feet) of ice to detect underlying rock structures that satellites can't spot. 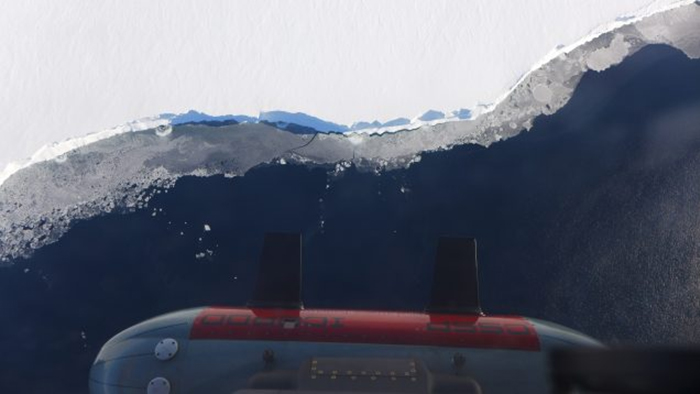 A view of the Ross Ice Shelf from IcePod. (Winnie Chu)

As researchers report in their newly published study, a geological boundary between East and West Antarctica has created a division underneath the continent, which is protecting the Ross Ice Shelf from warmer waters and further melting.

"We could see that the geological boundary was making the seafloor on the East Antarctic side much deeper than the West, and that affects the way the ocean water circulates under the ice shelf," says marine geologist Kirsty Tinto from Columbia University.

With the Ross Ice Shelf slowing the drift of about 20 percent of Antarctica's grounded ice out into the ocean – the equivalent of a global sea level rise of around 11.6 metres or 38 feet – that's an important finding.

Using the collected geological data and computer modelling, the team found that the tectonic dividing line stops warmer water reaching the grounding line of the ice shelf, where it connects with the sea floor.

At the same time, the geological formations under the Ross Ice Shelf can speed up melting along its easterly edge during the summer months, thanks in part to a region of open water called the Ross Shelf Polynya.

"We found that the ice loss from the Ross Ice Shelf and flow of the adjoining grounded ice are sensitive to changes in processes along the ice front, such as increased summer warming if sea ice or clouds decrease," says one of the team, glaciologist Laurie Padman from the Earth & Space Research organisation in Seattle.

Understanding the future melting patterns around Antarctica, and the impact they're going to have on the rest of our planet, is going to require detailed data around not just local, short-term conditions near the ice front but also wider, long-term changes happening in the circulation of deep warm water.

And that's the aim of the ongoing ROSETTA-Ice Project, of which this new study is a part. The work continues to observe and measure the melting patterns around the Ross Ice Shelf, which covers around the same surface area as France – some 480,000 square kilometres (185,329 square miles).

"To understand Antarctica and how it works we need to consider the ice, ocean, atmosphere and geology, and how they interact across various distances and timescales," says glaciologist Helen Amanda Fricker from the Scripps Institution of Oceanography in California.

"ROSETTA-Ice is a great example of how an eclectic, interdisciplinary team can come together to look at a complex system and really shift our understanding of how it works."