Hidden Graffiti Has Been Discovered Inside The Apollo 11 Command Module

Detailed handwritten notes have been discovered on the walls of the Apollo 11 command module that took astronauts Buzz Aldrin, Neil Armstrong, and Michael Collins to the Moon and back in 1969.

The command module Columbia has been on dispay at the Smithsonian's National Air and Space Museum in Washington, DC since the '70s, but the 'space graffiti' has remained unseen for 47 years, with researchers only now uncovering it using 3D scans to map the inside of the cabin.

As you might expect, the astronauts were pretty professional with this graffiti - the newly uncovered notes include a calendar counting down the days left in space, and coordinates revealing the lunar module's position on the Moon. (If it was us, we wouldn't have been able to overcome the urge to scribble "Neil, Buzz, and Michael were here" on our way out.)

Still, the wall markings provide fascinating insight into what life is like in space, as well as how the Apollo 11 mission was conducted, and the researchers are now revisiting old logs and recordings to try to figure out when and why they were made (presumably someone will also ask Aldrin or Collins, too).

"It's thrilling to know that we can still learn new things about Columbia," said Allan Needell, curator of space history at the museum. "We will continue to study the secrets Columbia holds, nearly 50 years after it completed its mission and for years to come. Columbia isn't just a piece of machinery, it is a living artifact."

The command module is where Collins remained in orbit while Armstrong and Aldrin explored the surface of the Moon in the Eagle lunar lander. The cabin contained all the equipment needed for re-entry to Earth's atmosphere and splashdown, and also housed the main control panels, navigation systems, and was used to store food, equipment, and human waste throughout the mission.

Human waste is usually managed by a sophisticated waste management system, but that doesn't kick in until the spacecraft has already launched, which is why one of the newly found notes explains that a storage bin contained "Launch Day Urine Bags" - presumably to remind the astronauts not to leave the contents untouched.

You can see the note on top right-hand corner of the image below: 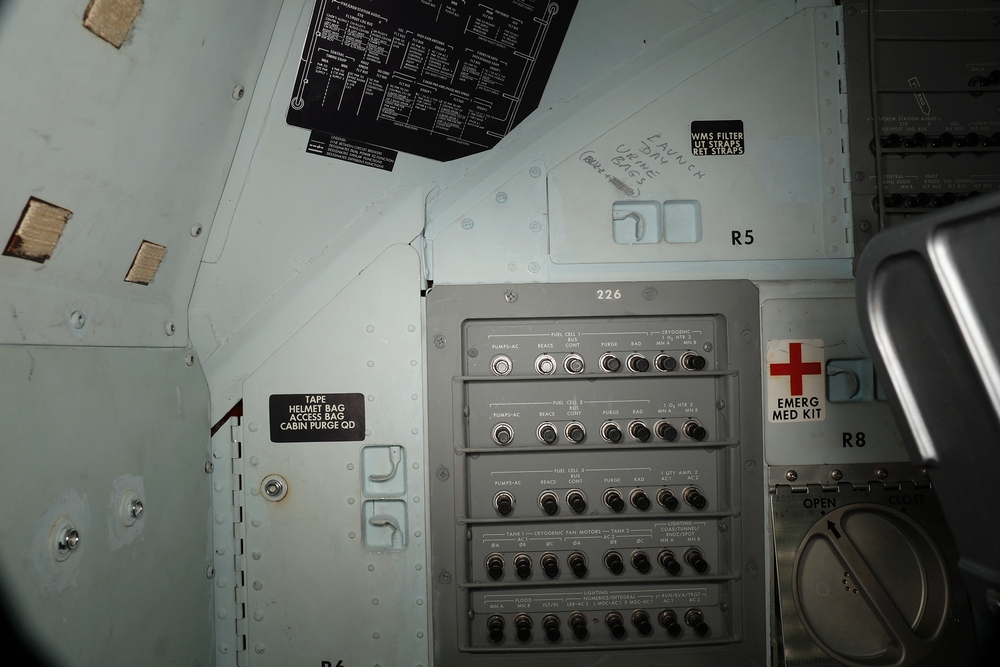 The scans also revealed a hand-drawn calendar - which shows each day of the week-long mission crossed off except the landing day.

"Exactly when this was drawn, by which astronaut, and the purposes it served are a matter of conjecture (and much discussion) since it was noted," explains Needell. "So far we have uncovered little additional information. We do know that it remains virtually unchanged since the command module arrived at the Lunar Receiving Laboratory during the two week quarantine period enforced on the early Apollo Lunar missions." The 3D scans that revealed the notes were conducted as part of the Smithsonian's attempt to create a high-resolution, interactive model of entire spacecraft, which will allow the public to explore the entire module virtually. This won't only open the command module up to visitors at the Smithsonian, who can't physically explore all of Columbia due to the risk of damage, but also the rest of the world.

"We want to allow anyone with an internet connection the ability to experience what is was like to sit in the cockpit of the Apollo command module," said Vince Rossi, 3D imaging specialist at the Smithsonian.

Even though these notes have only just been found, this isn't the first graffiti spotted on Apollo 11's walls. This poignant note left by Collins was spotted by historians decades ago: With a whole new generation of space lovers now getting excited for another mission - one that would take humans to Mars - it's pretty awesome to get insight into the journeys and astronauts that paved the way for them. We salute you and your super-professional doodles, Apollo 11 crew.