The potential of the gene editing tool CRISPR just seems to keep growing and growing, and the latest experimental use of the technology is creating skin grafts that trigger the release of insulin and help manage diabetes.

Researchers have successfully tested the idea with mice that gained less weight and showed a reversed resistance to insulin because of the grafts (high insulin resistance is a common precursor to type 2 diabetes).

In fact, the team from the University of Chicago says the same approach could eventually be used to treat a variety of metabolic and genetic conditions, not just diabetes – it's a question of using skin cells to trigger different chemical reactions in the body.

"We didn't cure diabetes, but it does provide a potential long-term and safe approach of using skin epidermal stem cells to help people with diabetes and obesity better maintain their glucose levels," says one of the researchers, Xiaoyang Wu. 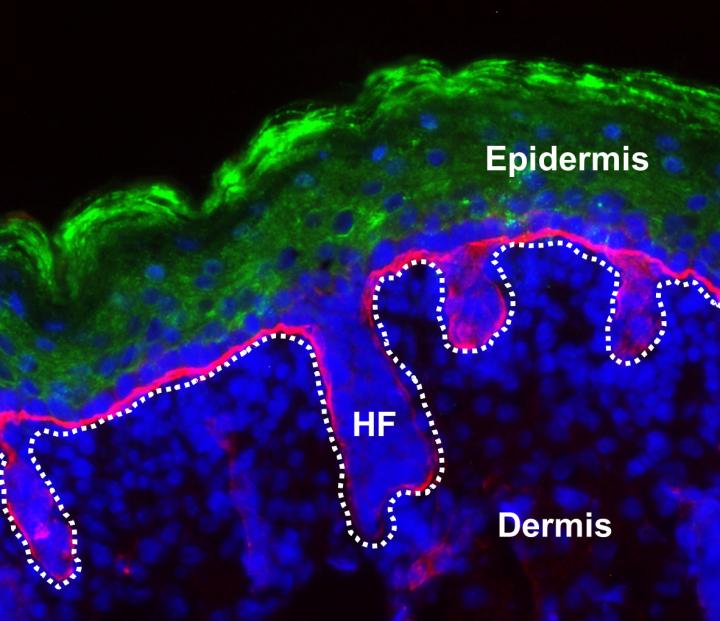 Immunofluorescence image of a skin graft. Image: University of Chicago

If you're new to the CRISPR (Clustered Regularly Interspaced Short Palindromic Repeats) phenomenon, it's a new and innovative way of editing specific genes in the body, using a biological copy and paste technique: it can do everything from cut out HIV virus DNA to slow the growth of cancer cells.

For this study, researchers used CRISPR to alter the gene responsible for encoding a hormone called glucagon-like peptide-1 (GLP-1), which triggers the release of insulin and then helps remove excess glucose from the blood.

Type 2 diabetes comes about due to a lack of insulin, also known as insulin resistance.

Using CRISPR, the GLP-1 gene could be tweaked to make its effects last longer than normal. The result was developed into skin grafts that were then applied to mice.

Around 80 percent of the grafts successfully released the edited hormone into the blood, regulating blood glucose levels over four months, as well as reversing insulin resistance and weight gain related to a high-fat diet.

Significantly, it's the first time the skin graft approach has worked for mice not specially designed in the lab.

"This paper is exciting for us because it is the first time we show engineered skin grafts can survive long term in wild-type mice, and we expect that in the near future this approach can be used as a safe option for the treatment of human patients," says Wu.

Human treatments will take time to develop but the good news is that scientists are today able to grow skin tissue very easily in the lab using stem cells, so that won't be an issue.

If we can make it safe, and patients are happy with the procedure, then the researchers say it could be extended to treat something like haemophilia, where the body is unable to make blood clots properly.

Any kind of disease where the body is deficient in specific molecules could potentially be targeted by this new technique. And if it works with diabetes, it could be time to say goodbye to needles and insulin injections.

Other scientists who weren't directly involved in the research, including Timothy Kieffer from the University of British Columbia in Canada, seem optimistic.

"I do predict that gene and cell therapies will ultimately replace repeated injections for the treatment of chronic diseases," Kieffer told Rachel Baxter at New Scientist.

The findings have been published in Cell Stem Cell.