Narcissists Actually Don't Like Looking at Themselves, Says New Study

Highly narcissistic men feel emotional distress rather than delight when viewing pictures of themselves, according to new research, which may help us understand how narcissism works in our social media age.

Narcissism – essentially being your own biggest fan, to an unhealthy extent – is most often seen as a negative and egocentric characteristic, but the reality might be a bit more complicated than that.

The researchers from the University of Graz in Austria think their study could help experts understand how narcissism works below the levels that we normally see on the surface – someone completely in love with themselves.

"Narcissism is a topic of increasing interest to science and the public, probably because cultural changes in the past decades favour narcissistic behaviour," one of the team, Emanuel Jauk, told Eric W. Dolan at PsyPost.

"Our study was aimed at taking a closer look at the self-image of narcissistic individuals using neuroscience, which might help to unveil its less conscious aspects." 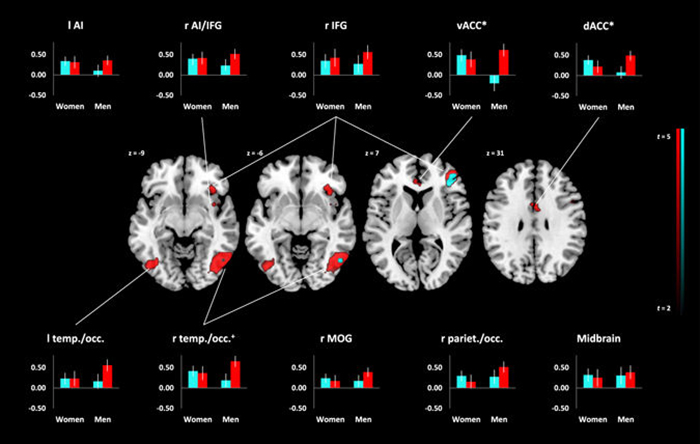 For the study, a pool of around 600 people was surveyed to find those with high or low levels of narcissism, using the Narcissistic Personality Test (NPI). The NPI asks for responses to statements like "I think I am a special person" and "I am no better or worse than most people".

From the pool, 43 people were selected, 21 who scored highly on the narcissism scale and 22 with low scores. The participants were then shown pictures of themselves, their close friends, and strangers, while their brain activity was being monitored with fMRI scans.

Those scans showed brain activity indicating "negative affect and conflicting emotional processing" in highly narcissistic men viewing photos of themselves – they didn't much like seeing their own mugshots.

In particular, scientists spotted increased brain activity in the upper and lower sides of the anterior cingulate cortex, previously linked to the processing of negative material referring to the self.

That suggests narcissists might struggle with negative opinions of themselves, maybe even on a subconscious level, according to the researchers.

"This points to an ambiguity or conflict in the self-image of narcissistic people," Jauk told PsyPost. "This phenomenon is well known to therapists, for instance, but probably less so to the public."

There are some limitations to the study we should mention: first the small sample size of 43, and second that the link between narcissism and brain activity wasn't found in women – these type of gender differences have been noted before.

More research will be needed to see if these findings apply more broadly then, but nevertheless the new study shows there might be more vulnerability and self-doubt hiding under narcissism than we thought.

"We think that our study can help raise awareness that narcissistic individuals are not simply 'bad' people, but that narcissism is a way of expressing conflicts in self-related beliefs and feelings," says Jauk.