If you've ever been tempted to try out the exotic (and controversial) spa treatment known as a fish pedicure, one woman's toe-curling experience will have you double-timing it back to your regular salon.

This bizarre practice – carried out by tiny fish called Garra rufa (aka 'doctor fish') – involves little carp pecking away at dead skin on the surface of your feet. But while these nibblers might be called doctors, their powers of rejuvenation are downright dangerous, as one woman in New York found out.

As a newly published case report details, the woman in her 20s presented to her dermatologist with a six-month history of abnormal toenails. She had no family history of nail disorders and no other medical problems – but one detail did stick out. 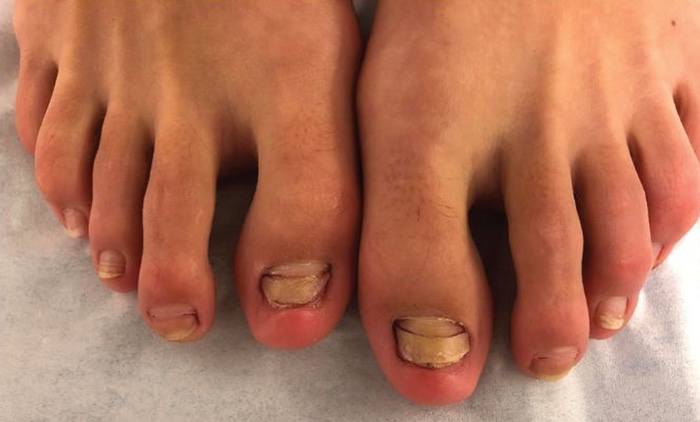 Some months prior to the start of her nail abnormalities, she had attended a fish pedicure treatment at a spa. This seemingly led to a nasty case of onychomadesis, in which the nail plates that make up the toenail begin to halt production and separate, causing nails to eventually fall off.

"We are not entirely sure of the mechanism of action but most likely it's from the trauma of the fish on the nail matrix, which is the nail growth centre, that probably caused this condition," dermatologist Shari Lipner from Weill Cornell Medicine told Today.

While Lipner believes this is the first-ever case linking Garra rufa to onychomadesis, it's not the first time the tiny not-actual-doctors have been accused of making people sick, with previous reports indicating fish pedicures have transmitted Staphylococcus aureus and mycobacteriosis infections.

While it's not the fish themselves that are the source of infectious threat to humans, the thinking goes that their toothless nibbling of human feet could spread harmful microbes from one spa guest's feet to the next.

It's for these kinds of reasons that – despite fishy promises of 'skin rejuvenation' from spas that offer Garra rufa treatments – fish pedicures have actually been banned in over 10 states in the US, as well as parts of Europe.

"The fish themselves [and their tubs] cannot be disinfected or sanitised between customers," the CDC's website explains.

"Due to the cost of the fish, salon owners are likely to use the same fish multiple times with different customers, which increases the risk of spreading infection."

There are also ethical implications. While Garra rufa are omnivorous, they need to be starved of plant food before they'll consider eating the dead skin off human feet, raising concerns over animal mistreatment.

Previous research also suggests that a lack of oversight of imported 'nibble fish' can introduce outbreaks of systemic bacterial infections in the animals, causing abnormal eye protrusions and haemorrhaging around the gills, mouth, and abdomen.

"I wouldn't say it necessarily poses a significant risk to humans, but it did illustrate that they may be carrying things which are nasty both to fish and humans," microbiologist David Verner-Jeffreys from the Centre for Environment, Fisheries, and Aquaculture Science in the UK, who wasn't involved in the new study, told CNN.

In any case, Lipner is monitoring the 20-something woman's feet and says her shedded toenails will eventually grow back, although the full regrowth for the impacted nails could take as long as 18 months.

While Lipner acknowledges we can't be 100 percent positive it was the Garra rufa behind this case of onychomadesis, she's "fairly sure that it was the fish pedicure", and advises her patients to never risk the treatment.

It might provide some surreal giggles and exfoliation, but it's not worth the risk. Above all else, she says, get your health professionals in order.

"If you have any problems with the skin on your feet or your nails, seeing a board-certified dermatologist is the best way to resolve this," Lipner told Today, "rather than seeing the fish doctor."

The findings are reported in JAMA Dermatology.