Humans can see faces in pretty much anything. Two blobs and a smear on carpet. A few rocks on Mars. A power outlet, or a sink. This delightful quirk of perception is called pareidolia, and it even works on a galactic scale.

You may be surprised to learn that the image above isn't actually a giant spooky head floating in space, but two galaxies undergoing the process of merging. The picture was released by the Hubble Space Telescope team in time to celebrate Halloween.

The system is called Arp-Madore 2026-424; located around 704 million light-years away, it sports an unusual head-shaped appearance because of the turbulent effects of two galaxies colliding. 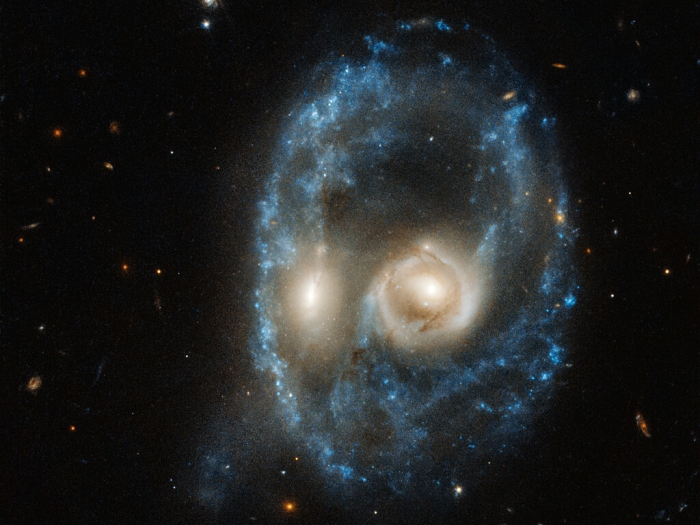 The object was first published in A Catalogue of Southern Peculiar Galaxies and Associations by astronomers Halton Arp and Barry Madore in 1987. They categorised the object as a ring galaxy, with the galaxy bang in the centre of a thin ring.

That ring, as seen in the Hubble image, is actually a product of the collision. As the two galaxies merge, their interaction is thought to produce a gravitational shock wave that pushes material outwards. When this material collides and compresses, it triggers a wave of star formation.

"The crash has pulled and stretched the galaxies' discs of gas, dust, and stars outward, forming the ring of intense star formation that shapes the 'nose' and 'face' features of the system," a press statement explains on the official Hubble website.

"Ring galaxies are rare, and only a few hundred of them reside in our larger cosmic neighbourhood. The galaxies have to collide at just the right orientation so that they interact to create the ring, and before long they will have merged completely, hiding their messy past."

Astronomers believe this ring will hold its shape for just a few hundred million years before it starts breaking up, leaving a large, bright galaxy - the two merged galaxies - behind.

Because it's so far away, we're seeing it as it appeared over 700 million years ago. The ring may already be lost to the ravages of time.