Hubble's Latest Image Release Is So Beautiful, It Should Be Illegal

The latest image released from the Hubble Space Telescope really is just beyond the pale.

Just look at it. The sheer audacity. The absolute cheek of it.

Here you were, just minding your own mundane business, and then Hubble had to come along and remind you that our Universe is jaw-droppingly, mind-blowingly, sickeningly gorgeous.

What you're looking at is a nebula around 4,900 light-years away in the constellation of Gemini. It's named AFGL 5180, and it's part of a vast molecular cloud complex named Gem OB1.

Such thick molecular clouds are where stars are born, and AFLG 5180 is no exception. It's spectacularly lit from within by a very young, hot star that's violently disturbing the space around it as it grows, carving out vast cavities in the gas cloud.

To make a baby star, you need to start with a dense clump in a cloud of cool molecular gas. If this clump collapses under its own gravity, it will start to form a star. As that protostar starts to spin, the material in the cloud around it forms a disk, spooling into the growing star, inexorably drawn in by its strengthening gravitational pull. 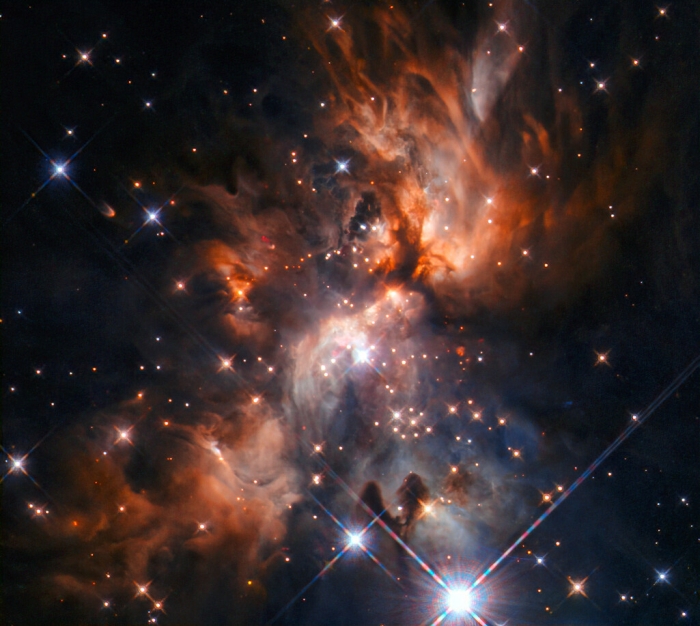 If you take a close look, you can see two beams emanating from behind a fold in the cloud, towards the top right and bottom left of the image. These are one way we know the star is growing. As material is drawn in towards the star, it starts to interact with the complex magnetic field, producing powerful plasma jets that shoot along the rotational axis.

These jets only last as long as material is falling onto the star, so once the star stops growing, the jets will die down.

In fact, jets are one of the mechanisms that prevent the star from growing ridiculously large: they push away material close to the star, taking it out of reach of the gravitational pull. Stellar winds, once thermonuclear fusion has ignited in the star's core, also push material away.

What's left of the disk, once the star is done growing, will clump together to form planets and asteroids and other planetary system objects.

We look at clouds like AFLG 5180 to learn more about these processes, but it can be a bit tricky. The dusty clouds are really thick, which makes it difficult to see what's happening inside.

That's where instruments like Hubble come in handy: in addition to visible light, the Wide Field Camera 3 can see in infrared, which penetrates the dust, revealing the sparkling treasure of young stars inside.

And, of course, these images let you take a moment out of your day to contemplate, in wonder, just how magnificent a Universe we live in.

If you want to download this image to use as a wallpaper, you can find it on the Hubble website.