It's the big mystery: Intelligent life should be out there in the Universe, so why haven't we found any evidence for it? This question is called the Fermi paradox, and there are a few potential answers.

But this one image (below) just really brings it home. Space is super, duper big, and humanity's reach into it? It's super, duper small.

The galaxy in the image is a reconstruction of the Milky Way, if it were about 110,000 light-years in diameter (more recent research suggests it's even bigger than that).

The itsy bitsy blue dot is how far our radio signals have travelled from Earth - a diameter of about 200 light-years. 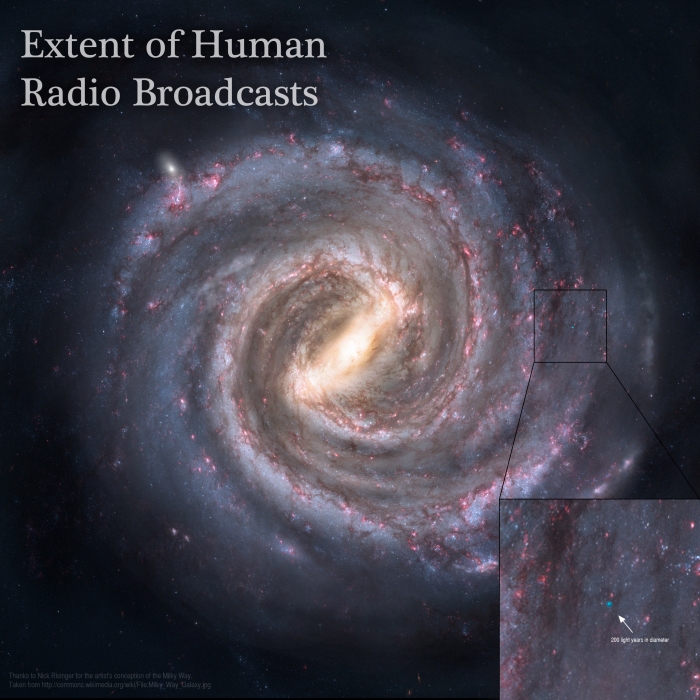 The invention of radio was the work of many great minds over the course of several decades during the 19th century, but the first transmission was made in 1895. Radio broadcasting came along a few years later.

The first intentional radio transmission to space, called the Arecibo message, wasn't until 1974, but we've been leaking radio signals into space for over 100 years.

Many of those are probably garbled by the ionosphere. Even those that aren't (like Earth-space communications), by the time they're 100 light-years away, are so attenuated and weak that they're basically undetectable anyway.

So, if there are any intelligent aliens beyond that radius, and if they have radio technology, they probably couldn't pick up what we're putting out there.

The same could be true in the other direction. Maybe, somewhere over 100 light-years away, there's an alien civilisation that just happens to have developed radio technology at exactly the same time as we did - and their signals are so weak that we can't detect them.

But we can still dream, right?