Paleolithic cuisine was anything but lean and green, according to a 2021 study on the diets of our Pleistocene ancestors. For a good 2 million years, Homo sapiens and their ancestors ditched the salad and dined heavily on meat, putting them at the top of the food chain.

It's not quite the balanced diet of berries, grains, and steak we might picture when we think of 'paleo' food. But according to anthropologists from Israel's Tel Aviv University and the University of Minho in Portugal, modern hunter-gatherers have given us the wrong impression of what we once ate.

"This comparison is futile, however, because 2 million years ago hunter-gatherer societies could hunt and consume elephants and other large animals – while today's hunter gatherers do not have access to such bounty," said Miki Ben‐Dor from Israel's Tel Aviv University in April last year.

A look through hundreds of previous studies on everything from modern human anatomy and physiology to measures of the isotopes inside ancient human bones and teeth suggests we were primarily apex predators until roughly 12,000 years ago.

Reconstructing the grocery list of hominids who lived as far back as 2.5 million years ago is made all that much more difficult by the fact plant remains don't preserve as easily as animal bones, teeth, and shells.

Other studies have used chemical analysis of bones and tooth enamel to find localized examples of diets heavy in plant material. But extrapolating this to humanity as a whole isn't so straight-forward.

We can find ample evidence of game-hunting in the fossil record, but to determine what we gathered, anthropologists have traditionally turned to modern-day ethnography based on the assumption that little has changed.

According to Ben-Dor and his colleagues, this is a huge mistake.

"The entire ecosystem has changed, and conditions cannot be compared," said Ben‐Dor.

The Pleistocene epoch was a defining time in Earth's history for us humans. By the end of it, we were marching our way into the far corners of the globe, outliving every other hominid on our branch of the family tree. 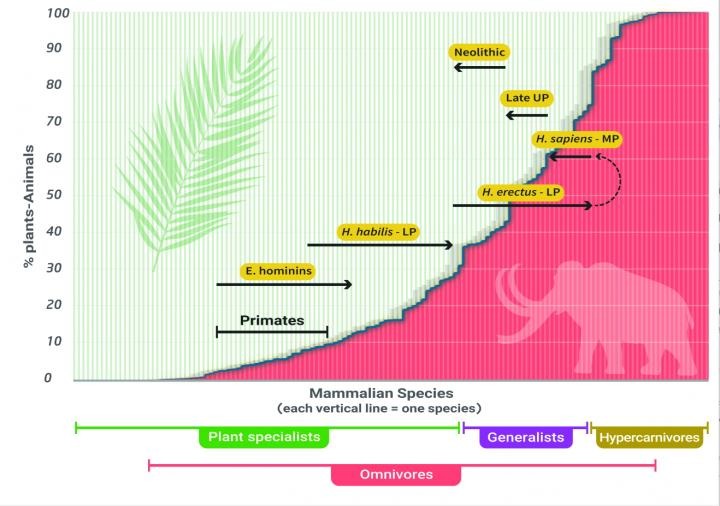 Above: Graph showing where Homo sapiens sat on the spectrum of carnivore to herbivore during the Pleistocene and Upper Pleistocene (UP).

Dominated by the last great ice age, most of what is today Europe and North America was regularly buried under thick glaciers.

With so much water locked up as ice, ecosystems around the world were vastly different to what we see today. Large beasts roamed the landscape, including mammoths, mastodons, and giant sloths – in far greater numbers than we see today.

Of course it's no secret that Homo sapiens used their ingenuity and uncanny endurance to hunt down these massive meal-tickets. But the frequency with which they preyed on these herbivores hasn't been so easy to figure out.

Rather than rely solely on the fossil record, or make tenuous comparisons with pre-agricultural cultures, the researchers turned to the evidence embedded in our own bodies and compared it with our closest cousins.

"We decided to use other methods to reconstruct the diet of stone-age humans: to examine the memory preserved in our own bodies, our metabolism, genetics and physical build," said Ben‐Dor.

For example, compared with other primates, our bodies need more energy per unit of body mass. Especially when it comes to our energy-hungry brains. Our social time, such as when it comes to raising children, also limits the amount of time we can spend looking for food.

We have higher fat reserves, and can make use of them by rapidly turning fats into ketones when the need arises. Unlike other omnivores, where fat cells are few but large, ours are small and numerous, echoing those of a predator.

Our digestive systems are also suspiciously like that of animals higher up the food chain. Having unusually strong stomach acid is just the thing we might need for breaking down proteins and killing harmful bacteria you'd expect to find on a week-old mammoth chop.

Even our genomes point to a heavier reliance on a meat-rich diet than a sugar-rich one.

The team's argument is extensive, touching upon evidence in tool use, signs of trace elements and nitrogen isotopes in Paleolithic remains, and dental wear.

It all tells a story where our genus' trophic level – Homo's position in the food web – became highly carnivorous for us and our cousins, Homo erectus, roughly 2.5 million years ago, and remained that way until the upper Paleolithic around 11,700 years ago.

From there, studies on modern hunter-gatherer communities become a little more useful, as a decline in populations of large animals and fragmentation of cultures around the world saw to more plant consumption, culminating in the Neolithic revolution of farming and agriculture.

None of this is to say we ought to eat more meat. Our evolutionary past isn't an instruction guide on human health, and as the researchers emphasize, our world isn't what it used to be.

But knowing where our ancestors sat in the food web has a big impact on understanding everything from our own health and physiology, to our influence over the environment in times gone by.

This research was published in the American Journal of Physical Anthropology.

An earlier version of this article was published in April 2021.

Trending News
Procrastinating Could Be a Sign of Serious Health Problems, Study Finds Health2 days ago
Fluke Discovery of Ancient Farming Technique Could Stabilize Crop Yields Environment3 days ago
These Massive Neutron Stars Existed For Less Than The Blink of an Eye Space3 days ago