Hunter-Gatherers Sit as Much as Us, But How They Sit Makes All The Difference

In recent years, the simple act of sitting down for long periods has become a cause for major concern, owing to a substantial body of scientific research linking higher levels of sedentary behaviour with serious health risks.

But is sitting itself really the problem? Maybe not. New research examining the Hadza people of Tanzania, an indigenous group known to practise one of the last surviving hunter-gatherer lifestyles on Earth, suggests it's not sitting that's the issue, but perhaps rather the way we choose to sit.

The findings – including a new piece of conjecture called the 'inactivity mismatch hypothesis' – could go some way to explaining a strange contradiction: the apparent disconnect between our evolutionary preference for resting to conserve energy, and contradictory evidence suggesting the very same inactivity actually hurts us.

"These inactivity-associated health risks are somewhat paradoxical, since evolutionary pressures tend to favour energy-minimising strategies, including rest," the authors of a new study, led by anthropologist David Raichlen from the University of Southern California, explain in their paper.

To resolve this conflict, Raichlen and his team examined the physical activity and inactivity of the Hadza tribe, hundreds of whom still live by the same hunter-gatherer traditions their ancestors would have practised countless generations ago. 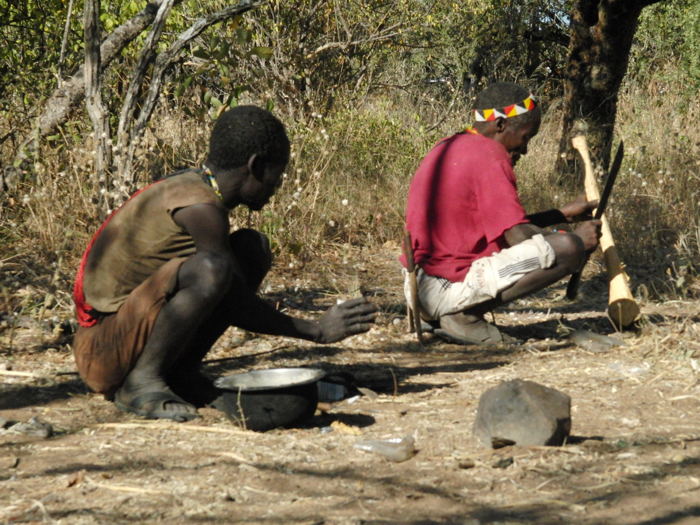 That traditional lifestyle doesn't bear much of a resemblance to the trappings of peoples in industrialised countries – and those differences, hypothetically at least, could be what keeps the Hadza healthy in ways that we are not.

"The participants in this study live in a traditional settlement far from any villages, subsist off of wild foods for nearly their entire diet, and have low levels of cardiovascular disease risk based on common biomarkers," the researchers write.

In the study, a group of 28 Hadza men and women with an average age in their late 30s wore accelerometer-based monitors on their thighs, which the researchers used to measure the amount of time they spent in resting postures during waking hours.

What the team found was that, much like industrialised populations in the US, Europe, and Australia, the Hadza spent a large portion of their day in relaxed, non-upright poses (almost 10 hours a day). But the way they reclined when resting was very different to the way we tend to laze around on couches, armchairs, and beanbags.

In terms of Hadza inactive time, the researchers observed that the majority of it was dominated by sitting directly on the ground, or squatting, or kneeling.

It may seem like a small difference, but the higher levels of sustained muscle activity involved in those kinds of sitting poses, compared to simply flopping on a sofa supported by fluffed-up cushions, for example, could add up in the long run.

"Being a couch potato – or even sitting in an office chair – requires less muscle activity than squatting or kneeling," Raichlen says.

"Since light levels of muscle activity require fuel, which generally means burning fats, then squatting and kneeling postures may not be as harmful as sitting in chairs."

The team's inactivity mismatch hypothesis proposes that while sitting and resting poses may have long served humans as a sound evolutionary strategy to conserve energy, the relatively rapid environmental changes that have transformed human living spaces since the time of hunter-gatherers mean that prolonged resting is no longer as physically advantageous as it once was.

"Human physiology likely evolved in a context that included substantial inactivity, but increased muscle activity during sedentary time, suggesting an inactivity mismatch with the more common chair-sitting postures found in contemporary urban populations," the researchers write, noting that it could be the prolonged muscular inactivity that comes with sitting, rather than the sitting itself, that's doing us harm.

The team points out a number of limitations in their study, and emphasise that a larger, longer-term research effort would be needed to confirm their ideas. (The Hadza also showed much higher levels of physical activity when they weren't at rest – which is another factor to consider.)

Nonetheless, their central theme could point to a healthier future for humans who like to sit down – one informed by our ancestors' relaxation, who perhaps didn't forget about their muscles as readily as we might.

"While behaviours are notoriously challenging to reconstruct for past populations, fossil evidence is consistent with our hypothesis that Palaeolithic populations regularly engaged in more active resting postures, like those observed with the Hadza," the researchers say.

"It seems probable that our bodies are simply not well-built for spending much of our day with muscular inactivity."