Don't Believe Your Eyes – This Picture of Strawberries Isn't Red

Two years ago, a goddamn blue (yes, blue) dress got the world into a tiz over colour perception, and in November last year, it was a pair of blue and black (or are they white and gold?) Havaianas that divided families and friendships worldwide.

Now a Japanese psychologist has created another mind-warping colour illusion by swapping the red pixels for grey ones in a photo of a strawberry tart, demonstrating once again that our brains have the final say on colour.

Akiyoshi Kitaoka from Ritsumeikan University in Japan stirred up a storm recently by tweeting a filtered photo of a strawberry tart and announcing there were no red pixels in the picture, contrary to what it might look like.

Strawberries appear to be reddish, though the pixels are not. pic.twitter.com/Ginyhf61F7

Respondents argued there were still red hues in the image, with teams on both sides heading to Photoshop in search of evidence.

To save you some time, here's an image we've prepared earlier, comparing an unfiltered version with the filtered 'grey' strawberries picture: 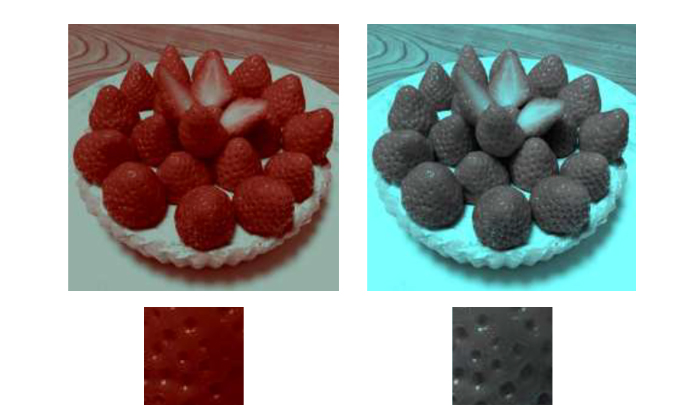 As you can see in the image on the right, those reddish strawberries are grey up close.

In case you missed the dress fiasco of February 2015, these kinds of illusions are evidence of a phenomenon called colour constancy.

"This occurs because our brain figures out the colour of things from discounting the colour of the light source," Juno Kim from the University of New South Wales explained to ScienceAlert.

Putting it simply, what we perceive as different colours are really different wavelengths of light between the range of about 390 to 700 nanometres.

In more complex terms, different wavelengths cause three types of photoreceptor inside your eye to send unique signals to your brain's visual cortex, which then combines this information with other clues about your situation to produce an experience we call colour.

This is a really useful trick, as it allows your brain to compensate for light changes that could otherwise create confusion.

Bright sunlight outside on a clear day, for instance, contains more short wavelengths that we'd normally see as the colour blue, compared with the light produced by a campfire, moonlight, or an incandescent bulb in your bedside lamp.

Looking at an object in bright sunlight would bounce more of those short wavelengths into your eye, sending a different mix of signals to our brains and, theoretically, producing a different experience of colour than we'd have at night.

In response, our brains have evolved a talent for noticing when there is a little too much blue light and ignoring it.

"Our brain computes this all of this information to account for lighting and essentially sees red. This phenomenon provides us with the ability to see colours almost invariable across changes in lighting conditions, such as outdoors versus indoors," says Kim.

While Kitaoka effectively removed most of the warmer colours by using a filter that swapped the longer wavelengths for shorter ones, our brains partially 'undid' this process when we looked at it, removing the blues to leave a somewhat-convincing red.

Of course, there's more to strawberries than just colour; we also use variations in shade and hue to identify their texture, giving our brains a big hint that these strawberry-like objects should appear more red.

Kim's own research has explored why the same object can seem shiny or transparent, depending on the positioning of its highlights and lowlights.

"It demonstrates the visual system has learnt to rely on the orientation of the horizon, and whether bright highlights are at the top or the bottom of an object, to work out whether objects are transparent or opaque. It shows that our brain is asking: which way is up?" he says.

It's an irony that the best way to learn how our brain works is to force it to fail.

If you're the kind of person who just likes to fool their sense of perception, Kitaoka has plenty more illusions for you to check out here.