An ancient sea dragon buried for 150 million years has been discovered by Indian researchers, and it's thought to be the first time an ichthyosaur (Greek for "fish lizard") from the Jurassic period has ever been found in India.

Ichthyosaurs were ocean-dwelling predators that lived alongside dinosaurs in the Mesozoic Era from around 250 million years ago, and while numerous fossils have been unearthed in North America and Europe, finding a virtually complete skeleton in India took researchers by surprise.

"This is a remarkable discovery," explains palaeontologist Guntupalli Prasad from the University of Delhi.

"[N]ot only because it is the first Jurassic ichthyosaur record from India, but also it throws light on the evolution and diversity of ichthyosaurs in the Indo-Madagascan region of the former Gondwanaland and India's biological connectivity with other continents in the Jurassic."

The specimen, which the team thinks is member of the Ophthalmosauridae family of ichthyosaurs – so-named because of its extremely large eyes – was uncovered last year near the village of Lodai, in India's Gujarat province.

The well-preserved skeleton is only missing some front and tail parts, and the team estimates the total length of the creature would have been around 5.5 metres.

"We could infer from wear patterns on its teeth that this ichthyosaur was a top-tier predator that fed on hard and abrasive food material," Prasad explained to PLOS Research News, "including marine molluscs (ammonoids and belemnites), fish, and possibly other marine reptiles."

Ophthalmosauridae are thought to have existed between around 165 and 90 million years ago, and the researchers suggest this Indian specimen could be 152 to 157 million years old.

During their excavation of Gujarat's Kachchh region, the palaeontologists had only imagined they'd be finding bone fragments, so discovering such a large, unprecedented fossil was unexpected. 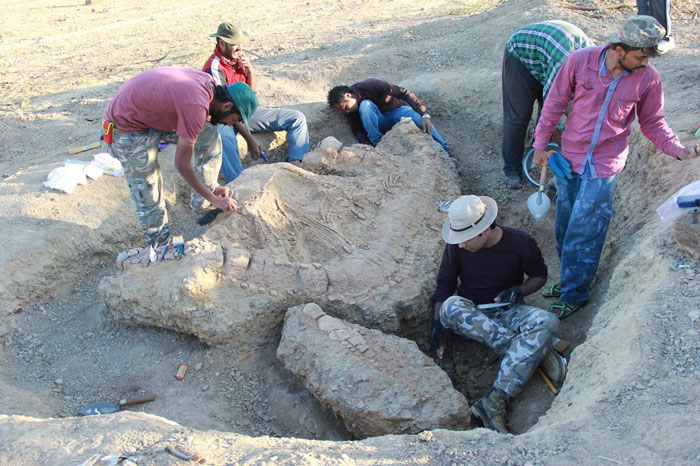 But the biggest impact of all could be what it tells us about how far ichthyosaurs roamed back when the supercontinent of Pangaea was slowly breaking up into Laurasia and Gondwana.

"[This] points to the possibility that ichthyosaurs may have moved between [what is now] Europe, western India, Madagascar and South America," said Prasad, "a process known as faunal exchange."

More than one recent ichthyosaur discovery has taken researchers by surprise. In August, scientists identified the largest Ichthyosaurus somersetensis specimen in the fossil record, which had been mistakenly categorised as a different kind of ichthyosaur since being discovered along the UK's Somerset coast in the 1990s.

And last year, researchers in Scotland finally properly excavated an ichthyosaur fossil that had been trapped in rock since its discovery in 1966 – not wanting to risk damaging the valuable bones until they had the time and money to safely dig them up.

These kinds of ancient sea monster discoveries haven't been occurring in Indian palaeontology up until now – but that could all be set to change.

"In the coming years, we plan to carry out extensive field exploration in the Kachchh region to find more ichthyosaur fossils and to search for other marine reptiles," said Prasad.

"We hope that our find may lead to renewed interest in vertebrate fossil research in this region, which could bring new discoveries to light."