If Hollywood wanted to make a movie about a horrifying plant invasion, giant hogweeds would make a great candidate for the lead role - they are absolutely massive, incredibly toxic, and readily spread wherever their seeds take root.

Listed as a noxious weed in at least eight states, back in June the giant hogweed (Heracleum mantegazzianum) was spotted in Virginia for the first time and locals were warned to stay clear.

And now it's caused third-degree burns in a Virginian teenager.

According to reports from the Massey Herbarium at Virginia Tech university back in June, about 30 of these towering plants have been found in Clarke County, and locals were warned to keep an eye out for sightings.

But on Friday, it was reported that a 17-year-old boy "briefly brushed" a rogue stalk of the giant plant while on a landscaping job. And that small contact was enough to land him in the burn unit at Virginia Commonwealth hospital.

He's reportedly the first patient the hospital has treated for a hogweed-related injury.

Native to the Caucasus region, the statuesque plant looks like a huge mutant version of the benign common hogweed - but it can cause severe skin burns if you so much as brush against the bristles on its stalks.

Those bristles, along with the rest of the plant, emit a nasty sap that chemically irritates the skin causing phototoxicity - severe damage to the skin through exposure to sunlight and UV rays.

As a result, one can get huge, oozing blisters that can leave behind scars and photosensitivity for many years (you can see some NSFW photos of giant hogweed-caused blisters here.)

But unless you're familiar with its nasty secret, you might think the giant hogweed looks cool - these large plants can grow more than 4 metres (14 feet) tall, spreading their huge leaves and producing massive umbrella-shaped clusters of white flowers.

After Britain first made the mistake in the 19th century, as an "ornamental" garden plant it was also introduced to North America just a few decades later, and since then it's been a battle to stop the flowering monster's march across the continent. 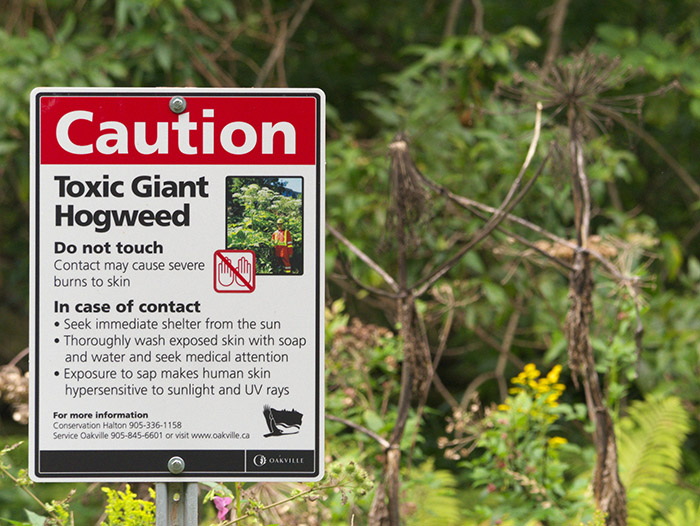 Once you have an infestation, it takes a lot of work to control the giant hogweed to prevent its spread, as its seeds - each plant can shed thousands - remain viable in the soil for several years.

"In some cases, a giant hogweed infestation is best controlled using several different methods in combination or in succession - in other words, a two, three, or even four-pronged attack plan," explains the New York Department of Environmental Conservation (NYDEC).

Those methods involve cutting the plant roots, removing seed heads, mowing them down when they're still small, and even dosing the whole thing with herbicide. Of course, going anywhere near a giant hogweed requires protective gear.

Weirdly enough, H. mantegazzianum isn't even the only horror weed that's come to plague the world from its Caucasus origins.

The closely related H. sosnowskyi species, discovered in Georgia in the 1930s, was brought into the Soviet Union for growing as cattle feed. These days, it is by far the scariest plant you could find in the Baltic States and Poland, where it's considered highly invasive.

It's easy to imagine that one day far in the future, when humans are all dead, whole swathes of our planet could be overgrown with this incredibly toxic, fast-growing plant. Movie writers, you're welcome.

To learn about the identification of giant hogweed and compare it to common look-alikes, check out the NYDEC site here.