It's Official: There Are Now 12 New Cloud Types to Fall in Love With

It's not every day that the world officially recognises a new species of cloud, but then again, this has been no ordinary week.

In case you missed it, Thursday was World Meteorological Day, and the UN's official weather body observed the occasion by recognising 12 new types of cloud and cloud features, including asperitas – the wave-like cloud structures that make it look like the world is underwater, as if the sky were the surface of the ocean.

Asperitas and 11 other kinds of clouds have now been formally listed in the International Cloud Atlas – the official reference work on all things cloud, as published by the World Meteorological Organisation (WMO).

It's a big release too – the first time the volume has been updated in some 30 years, and considering the Atlas was first published in 1896, it's pretty amazing to think that this scientific resource has informed cloud-watchers across three distinct centuries.

Clouds are categorised into 10 different genera, defined according to their appearance and position in the sky. The genera are then divided into species (describing shape and structure) and varieties (describing transparency and arrangement).

In the new Cloud Atlas – which the WMO says will now primarily exist as a web portal – the body has recognised one new species, called volutus.

Also known as a roll cloud, volutus are usually long and hang low in the sky, and their tube-shaped bodies sometimes look like they're rolling, as the name suggests:

The WMO has also recognised five new supplementary features – distinctive cloud structures that attach to other kinds of clouds.

Asperitas caught the eye of the founder and president of the US-based Cloud Appreciation Society, Gavin Pretor-Pinney in 2006, after he noticed members of the organisation posting images of clouds that didn't quite look like anything he'd seen before.

He then began a decade-long campaign to have the WMO formally recognise the new cloud – a massive effort which finally paid off this week.

"Back in 2008, I thought the chances of this becoming official were really minimal," he told Matt McGrath at the BBC.

"At first the WMO were saying they had no plans to do a new edition, but over time I think they began to realise there is an interest among the public in clouds and there is a need for that interest to be an informed one, there's a need for this authoritative work."

Here's a look at asperitas in all its undulating glory: 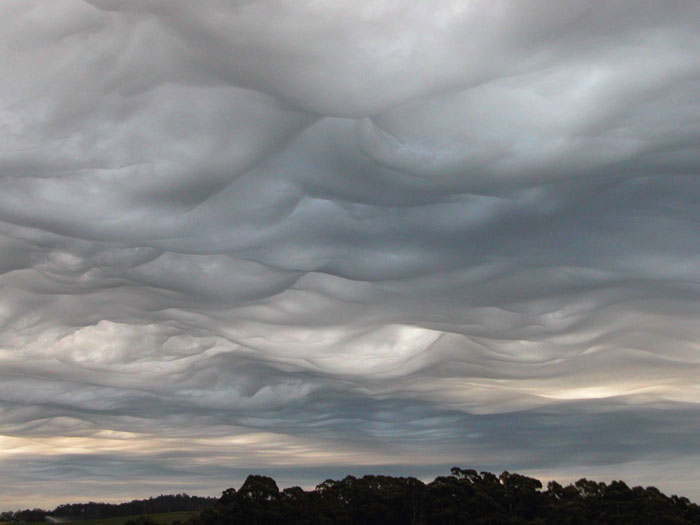 The updated Cloud Atlas recognises a new accessory cloud – the name for features that merge with another cloud – called a flumen, which is associated with severe convective storms.

To round things off, there are also five new "special clouds", which describe localised conditions where clouds are generated due to either natural causes or human activity.

In short, it's a great day if you love gazing at the sky, and there are plenty of new clouds – or at least new formally recognised clouds – to see if you can manage to spot them.