Millions of Baby Spiders Have Rained Down on Rural Australia

Residents in the Southern Tablelands of New South Wales in Australia took to social media earlier this month with claims that their region had been "taken over" by millions of baby spiders falling from the sky.

It sounds like something plucked right out of my nightmares, but scientists have verified that this spider rain is not only entirely possible, it's also not that uncommon.

"The whole place was covered in these little black spiderlings and when I looked up at the Sun it was like this tunnel of webs going up for a couple of hundred metres into the sky," Goulburn local Ian Watson told Inga Ting over at the Sydney Morning Herald. He found it beautiful but annoying, he added, because the spiders kept getting caught in his beard.

Watson took to a private community Facebook page to make sure he wasn't the only one being invaded by arachnids. "Anyone else experiencing … millions of spiders falling from the sky right now?" he wrote. "I'm 10 minutes out of town and you can clearly see hundreds of little spiders floating along with their webs and my home is covered in them. Someone call a scientist!"

What he was seeing could be caused by two spider migration techniques, naturalist Martyn Robinson from the Australian Museum told Ting. The first is called ballooning, wherein baby spiders climb to a high point and release their silk, which catches on the breeze to carry them away. 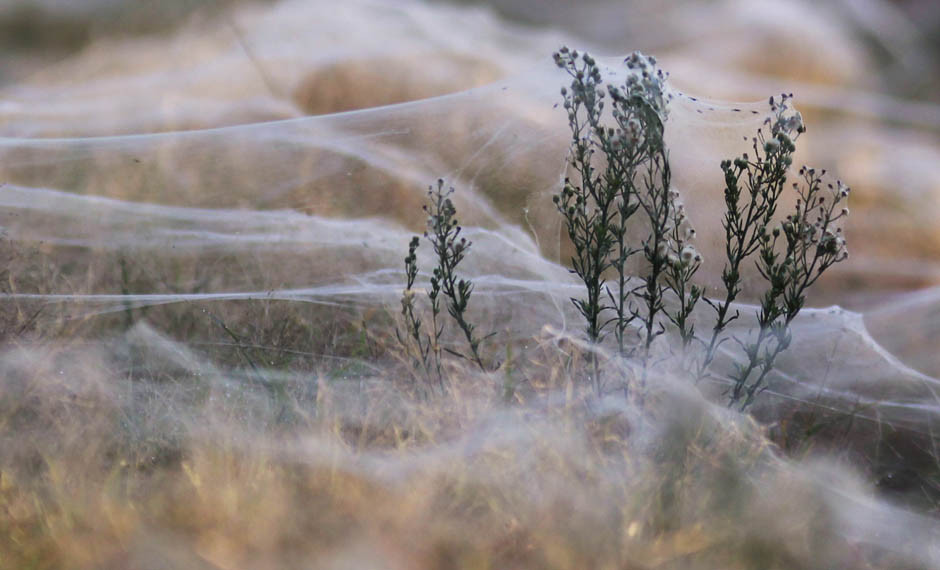 A plant covered by spider webs in Wagga Wagga in 2012. Credit: Daniel Munoz/Reuters

This technique can see spiders fly up to three kilometres off the ground, and across great distances. "Even in Antarctica they regularly turn up, but just die," Robinson told the Sydney Morning Herald. "That's also why the first land animals to arrive on new islands formed by volcanic activity are usually spiders."

The second technique is used during heavy rains and flooding. To escape rising water levels, ground-dwelling spiders throw up their silk in the hopes of catching a breeze and being carried off to a drier location. This can cause the so-called Angel Hair effect, where entire towns can become covered in fine spider silk during floods, which is what famously happened to Wagga Wagga - also in Australian - in 2012.

But don't panic, even though it's entirely possible that migrating spiders will rain down on you at any time, Robinson insisted that it was unlikely that any of the spiders associated with these techniques would be harmful. "There's nothing to worry about ... They'll all disperse once the weather conditions warm up."