New technology developed by Japanese engineers has walloped the heck out of the previous data transmission speed record.

Along an optical cable more than 3,000 kilometers (1,864 miles) long, the team achieved a data transmission speed of 319 terabits per second (Tb/s).

This not only smashes the previous record of an already jaw-dropping 178 Tb/s, the technology is compatible with existing infrastructure, which means that it could be upgraded relatively easily.

The new record was set by a team of scientists and engineers led by physicist Benjamin Puttnam of Japan's National Institute of Information and Communications Technology (NICT), and builds on previous work in which NICT participated, achieving speeds of 172 Tb/s, announced last year.

That achievement used a coupled three-core optical fiber, a technology that channels data along three optical fiber tubes rather than one as is currently standard, in order to reduce signal distortion over long distances. The 319-terabit speed used similar technology, but with four cores. 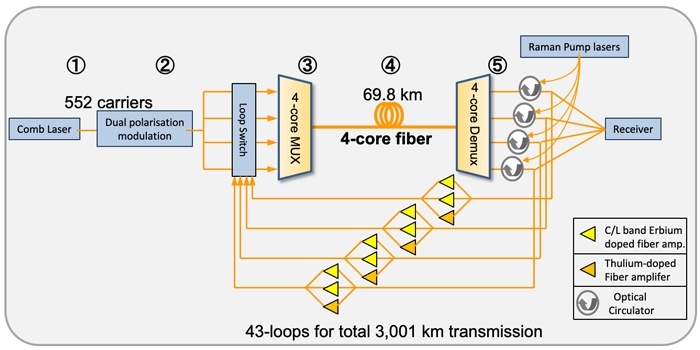 Schematic diagram of the system. (NICT)

The data is transmitted using technology called wavelength-division multiplexing. It is beamed from a laser that splits the signals into 552 channels, and sends it down the four optical fiber cores.

At 70-kilometer (43.5 mile) intervals along the fiber, amplifiers boost the strength of the signal to keep transmission loss at a minimum over long distances. These amplifiers are two new kinds doped with the rare earth elements thulium and erbium.

Overall, the average data rate per channel was around 145 gigabit per second for each core, and around 580 gigabits per second for all four cores combined. That's still insanely fast, all things considered.

The record-setting 319-terabit speed was achieved at the maximum 552 wavelength channels.

The cladding for the four optical fiber cores together has the same diameter as standard single-core optical fiber, which "is attractive for early adoption of SDM fibers in high-throughput, long-distance links, since it is compatible with conventional cable infrastructure and expected to have mechanical reliability comparable to single-mode fibers," the researchers noted.

The team's paper was presented at the International Conference on Optical Fiber Communications in June.