Komodo dragons - the biggest, fiercest, most impressive lizards on our planet - just got that much more amazing. A new discovery shows that under their scaly skin, these animals are completely covered in mail-like armour built out of tiny bones, from nose to tail-tip.

Why would something as formidable as a Komodo dragon (Varanus komodoensis) need armour, you ask? These lizards are strong, they're fast, they're venomous, they can take down prey much larger than themselves, and their species may be millions of years old.

Well, according to new research, that armour is probably there to protect the lizards from themselves - that is, other Komodo dragons.

The clue lies in when these lizards grow their bone-mail during their development. Researchers at the University of Texas at Austin and Fort Worth Zoo conducted detailed CT scans of newly deceased Komodo dragons, an adult and a juvenile.

They found that the adult was completely armoured, but the baby had no armour at all, suggesting that the osteoderms, as the tiny bones are called, don't develop until adulthood. And there's not much in their natural environment that can threaten an adult Komodo dragon - except, maybe, other adult Komodo dragons.

"Young Komodo dragons spend quite a bit of time in trees, and when they're large enough to come out of the trees, that's when they start getting in arguments with members of their own species," explained palaeontologist Christopher Bell of the University of Texas.

"That would be a time when extra armour would help." Osteoderms themselves aren't a new discovery, and in fact they can be found in a number of living reptiles and amphibians, including crocodilians, lizards and frogs, and even a mammal, the armadillo.

Over the decades, these bones have even been documented in adult varanids or monitor lizards, including the Komodo dragon.

The first mention in scientific literature of Komodo dragon osteoderms was in 1928, when naturalist William Douglas Burden noted: "Recently, trappers and poachers have bagged a good many skins but, owing to the bony plates or osteoderms, the hides have no commercial value."

Since the skin is usually removed for anatomical studies, exactly how these bones sit inside the skin of Komodo dragons hasn't been well studied or understood.

As you can imagine, Komodo dragon carcasses aren't exactly easy to come by. This is where Texas zoos enter the picture. A male Komodo dragon at Fort Worth Zoo died in 2013 at the age of 19.5 years; the zoo donated his carcass to the University.

At San Antonio Zoo, a baby Komodo dragon died at just two days old. They, too, donated the carcass. 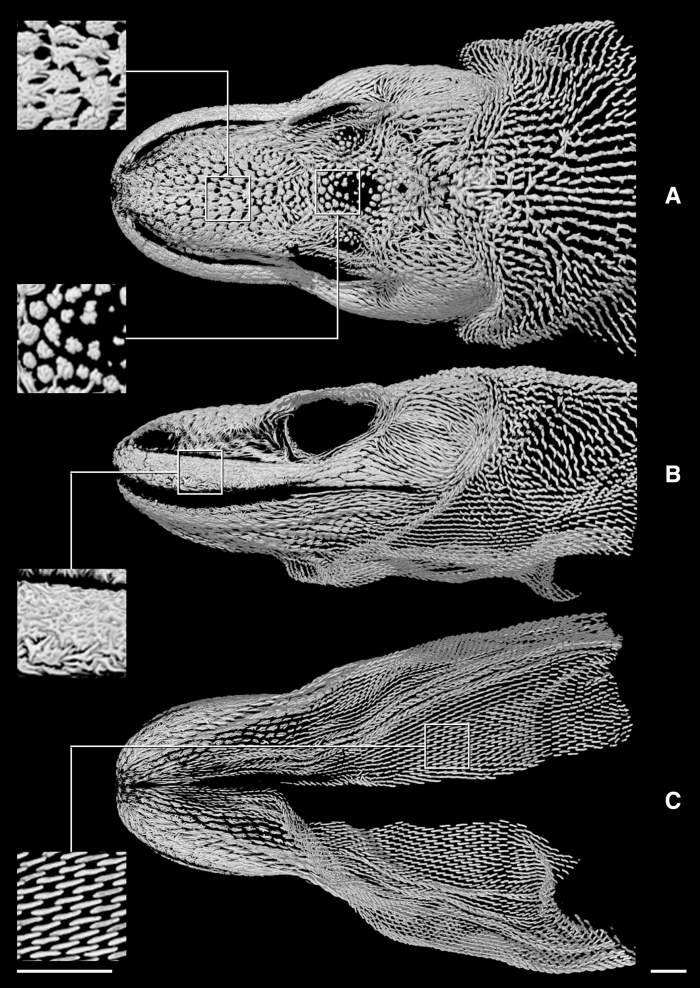 Both bodies were scanned using high-resolution X-ray computed tomography (HRXCT), although the mature male was too large for the machine and only his head could be scanned. But that was enough to reveal some fascinating details about the dragon's armour.

As already stated, the baby had no osteoderms. But the male's head was almost completely enveloped in a mesh of tiny bones, with four distinct shapes, completely unlike any of the seven other lizard HRXCT scans the team used for comparison (V. acanthurus, V. exanthematicus, V. gouldii, V. salvator, Lanthanotus borneensis, Heloderma horridum and H. suspectum) .

Other lizards seem to have a much sparser scattering of bones, sometimes with areas where they are completely absent, and with only one or two bone shapes. But the Komodo's head was almost entirely encased - just the eyes, nostrils, edge of the mouth, and pineal eye were uncovered. 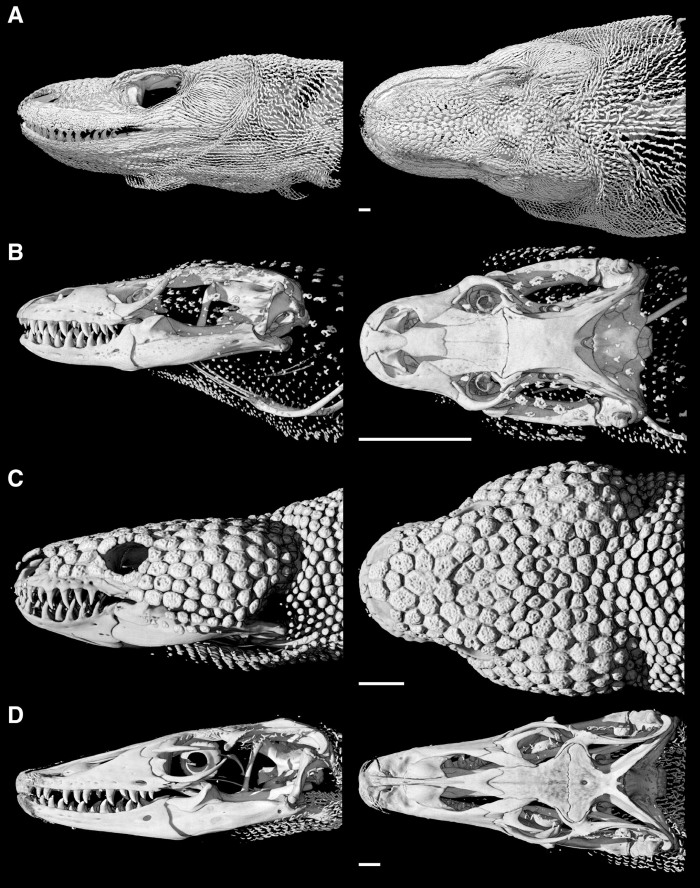 "We were really blown away when we saw it," said palaeontologist Jessica Maisano of the University of Texas. "Most monitor lizards just have these vermiform (worm-shaped) osteoderms, but this guy has four very distinct morphologies, which is very unusual across lizards."

The fuller coverage could have had something to do with the dragon's age; at 19.5 years old, he was one of the oldest Komodo dragons ever to live and die in captivity, and it's possible the osteoderms continue to grow as the lizards age.

Studying more Komodo dragons at different ages, the team hopes, could help shed some more light on this mysterious armour.

The research has been published in The Anatomical Record.