Back when vertebrates were just emerging, the world was inhabited by some pretty peculiar creatures.

We know of their existence from the impressions left behind in shale beds hundreds of millions of years old, once sediment at the bottom of a body of water.

Now researchers have found a new species, a bristle-covered worm with long feelers on its head, and it's helping us understand how annelid heads evolved - a group of animals that today includes earthworms and leeches.

The pipecleaner-like creature is called Kootenayscolex barbarensis, and it lived around 508 million years ago during the Cambrian era, not long after the first vertebrates emerged.

Researchers found it in the Kootenay National Park outcrop of the Burgess Shale fossil site in British Columbia, Canada. The place is famed for its exceptional fossils of soft-bodied creatures, documenting a period known as the Cambrian explosion - when the first representatives of most modern phyla appeared on Earth.

The location it was discovered in is called Marble Canyon, a new section of the site found in 2012. So far, it has turned up over 500 K. barbarensis fossils, making it the most abundant annelid species of the time - and providing plenty of material to study.

Many of the fossils were wonderfully and extraordinarily well preserved in the soft mud that hardened over the millennia. It was this exceptional preservation that led to the fossil's importance to the study of annelid evolution.

"Annelids are a hugely diverse group of animals in both their anatomies and lifestyles," said lead author Karma Nanglu, a University of Toronto PhD candidate, and a researcher at the Royal Ontario Museum.

"While this diversity makes them ecologically important and an evolutionarily interesting group to study, it also makes it difficult to piece together what the ancestral annelid may have looked like."

Annelids, or segmented worms, include over 17,000 species living today - from, as mentioned, the common earthworms in your garden to tubeworms dwelling next to hydrothermal vents in the dark depths of the ocean.

Because they're soft-bodied, the annelid fossil record is poor, which has historically made them very tricky to study. The Burgess Shale and similar deposits have given us some excellent fossils, but those are rare - and even then, they are difficult to understand.

Take, for instance, Hallucigenia, which for decades was studied the wrong way around, with its butt thought to have been its head. 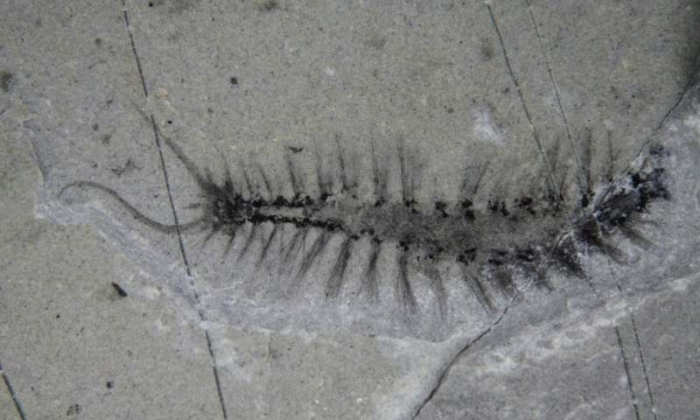 But with K. barbarensis, the head is unmistakeable, featuring two tube-like feelers on its head, probably used to feel its way forward as it fed on the seafloor. It also had more antennae between these feelers, distinguished from the bristles that ran down its length.

"Like other bristle worms, Kootenayscolex possesses paired bundles of hair-sized bristles spread along the body; this is in fact one of the diagnostic features of this group of animals," Nanglu said.

"However, unlike any living forms, these bristles were also partially covering the head, more specifically surrounding the mouth. This new fossil species seems to suggest that the annelid head evolved from posterior body segments which had pair bundles of bristles, a hypothesis supported by the developmental biology of many modern annelid species."

Some of the fossils were so well preserved that they included delicate internal tissues, such as what the researchers think might be the worm's nervous tissue. These details can reveal a lot about its life - and also help connect it to modern species.

"508 million years ago, the Marble Canyon would have been teeming with annelids," Nanglu said.

"The fine anatomical details preserved in Kootenayscolex allow us to infer not only its evolutionary position, but also its lifestyle. Sediment preserved inside their guts suggests that, much as their relatives do in modern ecosystems, these worms served an important role in the food chain by recycling organic material from the sediment back to other animals that preyed on them."

The team's research is due to be published in the journal Current Biology.