There are precious few places left in the United States where you can still view a "pristine" night sky, according to a new study in the Journal of Environmental Management.

Situated far from the glare of city and small town lights, these places offer the same unimpeded view of the cosmos that our ancestors saw thousands of years ago, before electric lighting conquered the darkness.

The study, led by Fabio Falchi of the Light Pollution Science and Technology Institute in Italy, plotted artificial light pollution at the county level in the United States, research that builds on a global atlas that he and others produced in 2016.

It also adds to a growing body of research on light pollution, which has been linked to a host of ailments - such as depression, obesity, even cancer - and can confuse wildlife, muddling their sense of direction and migration patterns.

At the county level, the District of Columbia is the most light-polluted region of the country, with more than 200,000 times the artificial brightness of America's darkest place, the city and borough of Yakutat in Alaska. 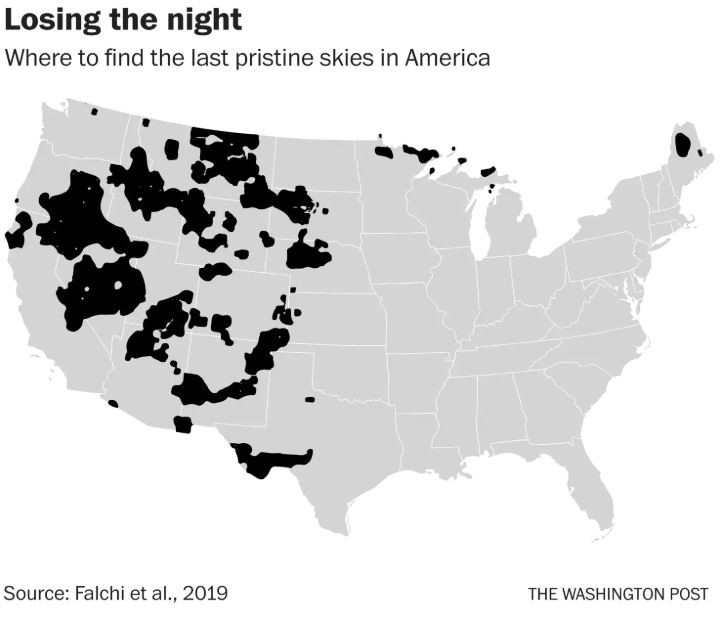 Generally speaking, most of the remaining pristine skies are concentrated in rural parts of the western United States. But pockets of unblemished night can still be found in parts of northern Minnesota, Michigan and Maine. Most of Alaska and parts of Hawaii also contain unspoiled skies.

Researchers across several disciplines are paying closer attention to light pollution. Artificial light can suppress the production of melatonin, the hormone that regulates sleep, and disrupt the circadian rhythms that dictate sleep patterns.

Sleep is crucial to a person's physical and emotional well-being.

Nighttime lighting only became common in the past 150 or so years, a sudden disruption to the fine-tuned relationship with darkness and light that humans and other animals have evolved over millions of years.

Bright city lights have been shown to disorient sea turtle hatchlings, luring them onto roads instead of toward the open sea.

Among many other effects, artificial lighting has been shown to disrupt bird migrations, alter the behavior of bats and delay the metamorphosis of certain amphibian species. The net effect of all these changes on global ecosystems remains unknown.

The rise of light pollution has accelerated in recent years with the introduction and widespread adoption of powerful LED lights that use just a fraction of the power of earlier lighting technologies.

Aside from making it more economically feasible to provide brighter illumination to larger outdoor areas, many of those LEDs emit higher levels of blue light than older lighting fixtures did.

The eyes of humans and many animal species are particularly sensitive to that blue light, and it travels farther through the atmosphere than other types of light, making it especially concerning from a light pollution standpoint.

Strategies for reducing light pollution include shielding outdoor fixtures so that light is directed only toward the area where it is needed, rather than upward toward the sky, selecting bulbs that don't emit excessive amounts of blue light and only providing as much illumination as is needed.

In recent years some American cities and states have taken steps to reduce their overall light pollution. Many of those efforts stem from the work of the International Dark-Sky Association, a nonprofit group fighting light pollution. In 2017, it designated a swath of central Idaho as the country's first Dark Sky Reserve.

The designation recognizes the region's pristine skies, lack of light pollution and "exceptional or distinguished quality of starry nights and nocturnal environment."

Trending News
Six Minutes of Intense Exercise Boosts a Crucial Molecule in Your Brain Health3 days ago
Some People's Brains Are Wrinklier Than Others, And Now We Know Why Health3 days ago
Great White Sharks Are Being Scared From Their Habitat by Just 2 Predators Nature3 days ago