When Hurricane Patricia shredded into the west coast of Mexico in October 2015, it was the strongest Pacific hurricane on record – but something else inside the swirling maelstrom also helped the violent storm make history.

From inside the most intense tropical cyclone recorded in the Western Hemisphere, for the first time ever scientists observed a downward beam of positrons as it unleashed during a terrestrial gamma ray flash.

Terrestrial gamma ray flashes (TGFs) occur about a thousand times a day during lightning storms, but they're not always easy to catch – lasting just milliseconds, during which they release energies of up to 20 million electronvolts.

These events were first detected from space in the 1990s using space-based gamma-ray detectors, and it's long been theoretically predicted that gamma ray flashes – which are directed upward into the sky – would be accompanied by something else: a downward beam of positrons, the antimatter counterpart of electrons.

Now, thanks to a brave flight crew who flew the NOAA's Hurricane Hunter aircraft directly through the towering eyewall of Hurricane Patricia, we've actually been able to directly observe this intense phenomenon.

"This is the first confirmation of that theoretical prediction, and it shows that TGFs are piercing the atmosphere from top to bottom with high-energy radiation," says one of the researchers, physicist David Smith from UC Santa Cruz.

"This event could have been detected from space, like almost all the other reported TGFs, as an upward beam caused by an avalanche of electrons. We saw it from below because of a beam of antimatter (positrons) sent in the opposite direction."

According to the researchers, their findings should now make it easier to detect TGFs in the future – without resorting to flying into either hurricanes or space – using ground-based instruments at high altitudes. 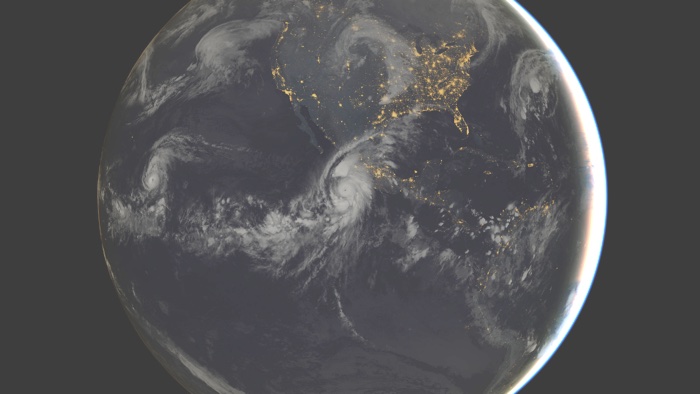 "That's the altitude of Denver, so there are a lot of places where you could in theory see them if you had an instrument in the right place at the right time during a thunderstorm."

The researchers made their discovery using a device called the Airborne Detector for Energetic Lightning Emissions (ADELE) mk II, which detects X-rays and gamma rays produced by the downward-moving positrons.

More recently, scientists in Japan have observed some of the same phenomena, detecting antimatter generated by a fierce thunderstorm off the coast of Japan last year, and NASA frequently records TGFs from satellites.

Despite these kinds of observations, the researchers say there's still a lot of work to be done to fully understand the mechanisms that power TGFs, and the specific conditions required to drive an 'avalanche' of electrons upward at nearly the speed of light, while their antimatter equivalents are channelled towards Earth's surface.

The ADELE device could help further in that regard, enabling TGFs to be detected up close when they happen, although the researchers caution you wouldn't want to get too close to the event – the dose of gamma rays would be negligible at about a kilometre away, but closer might not be advisable.

"It's hypothetically a risk, but the odds are quite small," Smith says.

"I don't ask pilots to fly into thunderstorms, but if they're going anyway I'll put an instrument on board."

The findings are reported in the Journal of Geophysical Research: Atmospheres.