Decades before we knew birds could 'see' Earth's magnetic field, Albert Einstein was discussing the possibility of undiscovered super senses in his fan mail.

A long-lost letter from the famous scientist to an inquiring engineer in 1949 has turned out to be extraordinarily prescient in both the field of biology and physics.

The original enquiry from engineer Glyn Davys, which started the correspondence, has since been lost, but judging from Einstein's reply, Davys' question had something to do with animal perception and what it can tell us about the physical world.

"It is thinkable that the investigation of the behaviour of migratory birds and carrier pigeons may someday lead to the understanding of some physical process which is not yet known," Einstein wrote in his reply.

More than 70 years later, we now know Einstein's hunch was right on the money. Evidence now suggests birds can sense Earth's magnetic field using special photoreceptors in their eyes that are sensitive to subtle shifts in the planet's magnetic field. This is what allows them to migrate thousands of kilometers without getting lost.

Other animals, like marine turtles, dogs, and bees, also show an uncanny ability to sense our planet's magnetic fields, although not necessarily through the eyes.

"It is amazing that [Einstein] conceived this possibility, decades before empirical evidence revealed that several animals can indeed perceive magnetic fields and use such information for navigation," write researchers at The Hebrew University of Jerusalem, where the letter was recently donated.

Still, the Nobel Prize winner did have some clues to guide his thinking. At the time the letter was written, biological science and physical science were beginning to merge like never before. Bat echolocation had recently been discovered, and radar technology was beginning to take root.

In fact, Davys himself was a researcher in this field, which is probably why he was interested in other strange animal senses, like those shown by bees.

In Einstein, he found a like-minded soul. It seems the famous physicist was also fascinated by biological science as a window to unseen physical forces.

His return letter, which was undiscovered until Davys' death in 2011, is short, but it confirms Einstein was similarly fascinated by the behavior of bees. 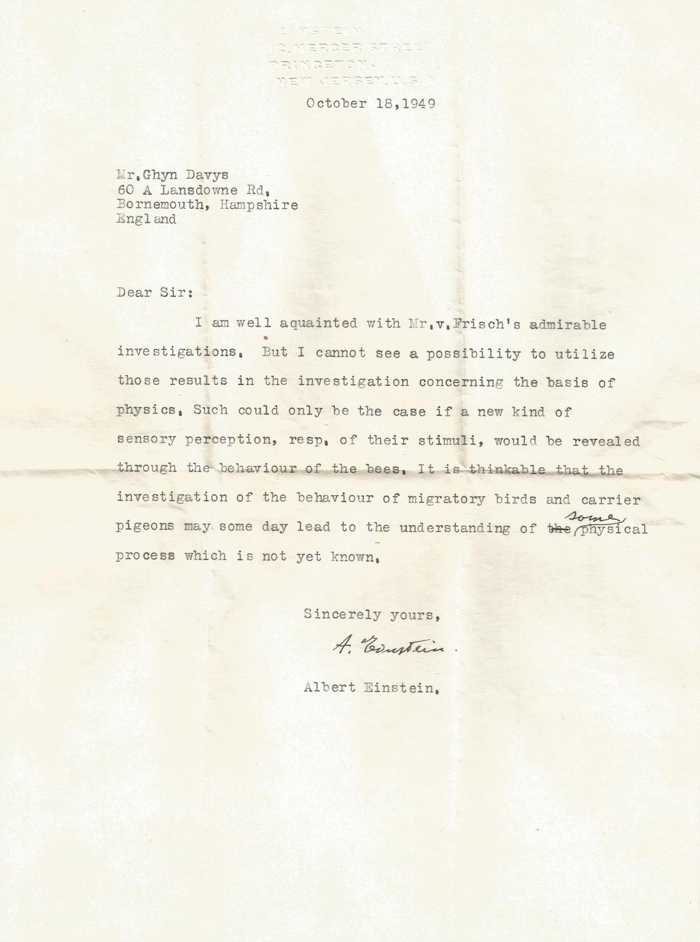 In the type-written note, Einstein admits he is well acquainted with Karl von Frisch, who had recently figured out bees navigate using the polarization patterns of light.

Einstein is known to have attended one of von Frisch's lectures at Princeton University six months before the letter was sent. He even had a personal meeting with the researcher, and these interactions clearly left an impression.

While Davys seems to be most interested in how this new biological knowledge can inform future technology, Einstein argues we need more biological research.

"I cannot see a possibility to utilize those results in the investigation concerning the basis of physics," he replied to Davys.

"Such could only be the case if a new kind of sensory perception, resp. of their stimuli, would be revealed through the behaviour of the bees".

Since the letter was sent, we've learned a lot about bee behavior and how these curious insects perceive the world. Just as Einstein predicted, that knowledge is already helping us improve technology, like the cameras on our iPhones.

Despite decades of research, however, there's still a lot of mystery left. The exact mechanisms by which animals perceive light or sense the Earth's magnetic field are still being teased apart, and it might not be the same for every species.

Bees, for instance, appear to sense the magnetic field in their abdomen, while birds and dogs seem to do so predominantly through special photoreceptors in their eyes called cryptochromes.

Even human cells make cryptochromes, and recent research reveals these cells respond dynamically to changes in the magnetic field.

This is ironic, because it's what you would expect from a unique quantum reaction. For a photoreceptor to sense a magnetic field, it would require electrons within the cell to become entangled, and Einstein at the time had rejected this idea, calling it "spooky action at a distance".

Clearly, Einstein wasn't always right, but even when it came to fields of science outside his expertise, the man had brains.

The study was published in the Journal of Comparative Physiology A.