A new image shows a breathtaking galaxy as you have never seen it before.

Not only is the image absolutely spectacular, it's scientifically valuable: By studying the galaxy's light across multiple wavelengths, scientists can gain a better understanding of star formation and evolution processes.

The galaxy in question is an object called NGC 4254, or Messier 99; the new capture reveals it across multiple spectra of light, thanks to the Multi-Unit Spectroscopic Explorer (MUSE) on ESO's Very Large Telescope.

All galaxies are special, but NGC 4254, located around 50 million light-years from the Milky Way, belongs to a subset deemed spectacular among spectacular, like an albino peacock: a "grand design" spiral galaxy.

However, through the eye of MUSE, NGC 4254 becomes a lot fluffier, as it reveals the interstellar gas ionized by newborn stars. Although the galaxy isn't birthing stars at a rate high enough to categorize it as a starburst galaxy, its activity is three times higher than the average for galaxies of its type.

Astronomers think this could be because of an interaction with another galaxy, millions of years ago. The clue to support this lies with one of NGC 4254's spiral arms, which seems looser and more extended than the other.

This ancient interaction would have perturbed NGC 4254, causing enough compression in its molecular gas to trigger heightened star formation activity. 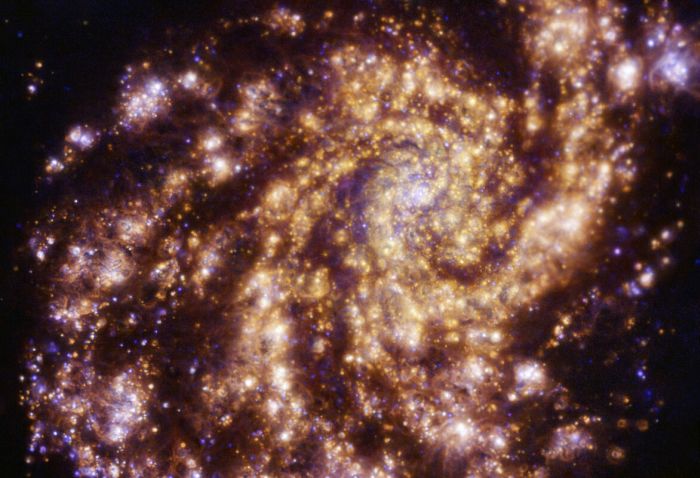 Whatever the cause, its relatively close proximity to the Milky Way, and the angle at which we can view it, combine to make NGC 4254 an excellent example for studying star formation processes.

The MUSE image was taken as part of the Physics at High Angular resolution in Nearby GalaxieS (PHANGS) project, which takes high-resolution, multi-wavelength images of nearby galaxies in order to study the entire cycle of how stars are born.