40% of Worker Ants Are Actually Lazy Slackers, But They Have Their Reasons

Spend any amount of time gazing at an ant's nest (hey, what you do with your time is your business) and it's clear that the whirling mass of tiny bodies is an impenetrable, chaotic mess to the casual observer.

But if you really want to keep tabs on individual ants, you could try painting them with identifying colours – in which case that maelstrom of activity might start to make sense, and in so doing, help solve a mystery about ants that was first noticed in 2015.

Back then, entomologist Daniel Charbonneau from the University of Arizona made the discovery that, despite how busy and industrious ant colonies seem to be, their general blur of movement masks a stunning truth: some 40 percent of the workforce are actually inactive slackers.

"And whenever they're doing anything other than doing nothing, they do chores around the nest, like a bit of brood care here or grooming another worker there." 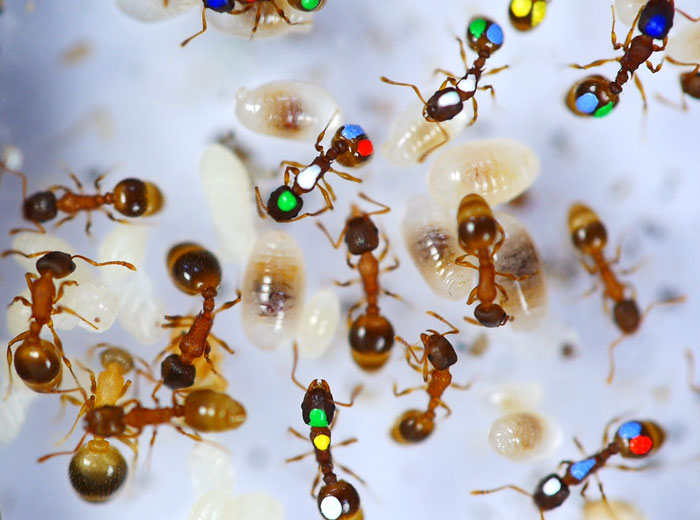 After discounting the prospect of ants taking breaks (seriously) and various other hypotheses – such as seasons or circadian rhythms affecting their work ethic – the researchers simply concluded that some ants basically 'specialise' in being lazy layabouts, although the rationale behind this patently unfair division of labour remained unknown.

Now, in a new study, Charbonneau says we could finally have an explanation for what these inactive ants are actually there for, and it's all thanks to what might be the world's smallest body painting stall.

"We apply tiny dots of paint to them," Charbonneau says.

"One on head, one on thorax, and two dots on abdomen. The combination of colours and location identifies each individual, so we can track it in our video recordings."

Once the team used this identification system on 20 colonies of Temnothorax rugatulus ants collected from a pine forest in the Santa Catalina Mountains in Arizona, they had a chance to track the most and least active ants in the collectives.

In a series of experiments where active and inactive ants were alternately removed from their colonies, the researchers think they've determined the specialised purpose that the laziest animals serve: they're a reserve labour force that only gets called upon when they're absolutely needed.

When the top 20 percent of the most active ants were removed from the workforce, the inactive ants stepped in to fill their ranks over the course of a week, effectively hitting the KPIs of the MIAs. Any modern office manager would be impressed.

This is a function the team had hypothesised in its earlier research, and it suggests personnel rearrangements function as a mechanism to ensure there's always a certain proportion of active workers within the colony.

"Serving as a replacement workforce is a long-held suspicion about the function of 'lazy' ants," says one of the researchers, Anna Dornhaus, "but it was just an assumption and never had been empirically confirmed."

In other tests, when only the inactive ants were taken out of the colony, the ants opted not to allocate individuals to prop up their reserves department. So while the B team is always ready to step things up, that 'job' of being lazy was not considered something that needed bolstering from other, more active jobs around the nest.

"This makes sense because without foraging and brood care, workers and brood won't be fed, which will likely incur a large fitness cost to the colony very quickly," the team writes in their paper.

"Thus, it seems that colonies do not seek to maintain homeostasis of colony activity in general, but rather that worker replacement depends on the immediate necessity of the task."

So, while some of us might pine for the idyllic, leisure-filled life of the lazy ant, it's not an existence without its own compromises: chiefly, being aware that in the eyes of your well-regarded, go-getter colleagues, you're an anonymous, disposable unit of labour.