Mark Zuckerberg Is Launching a Facebook Dating Service. Here's What You Need to Know

Mark Zuckerberg just announced that Facebook is joining the dating game, trying to help its users build perhaps "the most meaningful relationship of all."

Zuckerberg made the announcement on Tuesday during his keynote speech at F8, Facebook's annual developer conference, where the executive team unveils what the company has been working on for the past year.

And it turns out that one of those things is designed to compete with dating apps like Tinder and Hinge. Zuckerberg emphasised that Facebook's intent was to help users find long-term relationships and "not just hookups."

It's unclear how developers could control that aspect of the features, but the CEO acknowledged potential security concerns, saying: "I want to be clear that we have designed this with privacy and safety in mind from the beginning."

Facebook's chief product officer, Chris Cox, said on stage that the idea stemmed from couples who had told Zuckerberg that meeting their partner was the most important thing that had happened to them on Facebook.

The goal, he said, was to make a product that would let more couples do the same "in a way that was opt-in, in a way that was safe, and in a way that took advantage of the unique properties of the platform and didn't get in the way of everyone who wasn't interested in dating."

Here's what we know so far about Facebook's new dating-service features.

The features will be available in the Facebook app, via an icon in the upper right of the screen that will take users to a portal called "Dating Home."

They can make a dating profile that uses only their first name and can't be seen by friends or in the News Feed - it's visible only to other people who have also opted into the dating service.

Here's what the top of the dating-service feed will look like.

Scrolling down, you'll see events in your city and groups related to your interests.

When you unlock an event, you'll also unlock the profiles of the people using the dating service who are also attending. Presumably, they will be able to see your profile at that point too.

To start a conversation with another person, you'll click "interested." It's not clear whether Facebook will allow any Tinder-like swiping gestures, but there's also the ability to "pass."

Once you've selected "interested," you can choose a photo from the other person's profile to help start a conversation. "This will encourage, we hope, a more meaningful interaction," Cox said.

If the other person decides to respond, they will send a private message that isn't connected to WhatsApp or Facebook Messenger and is text-only "as a safety measure," Cox said. 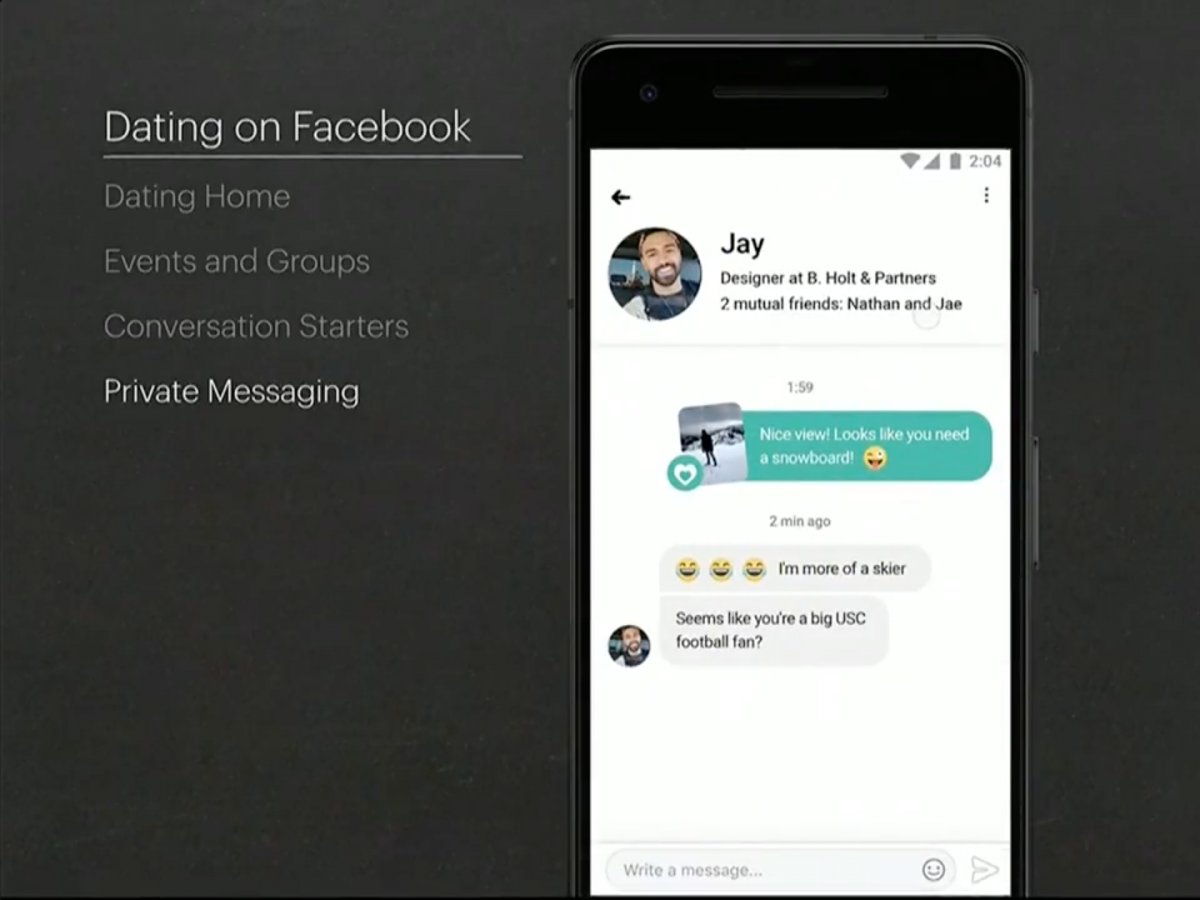 We may already know more about what the app might look like - patents previously filed by Facebook have shown designs for a dating site, as Gizmodo's Kashmir Hill noticed.

We can't be sure that the layout or functionality stayed the same from patent filing to product development, but the filings are indicative of Facebook's thinking when approaching a new service like dating.

Facebook hasn't specified when the new dating-service features will launch but says they're coming soon.