If we ever do make it to Mars, the first visitors are going to come across some truly out-of-this-world sights – but to see the majestic auroras sweeping through the Martian sky during the day, they're going to need ultraviolet goggles.

A new study has found that a particular type of aurora, the proton aurora, is the most common form of the phenomenon on Mars. Like auroras on Earth (including the Northern Lights), proton auroras are formed when solar winds interact with the atmosphere.

These auroras aren't just pretty sights for UV-enabled cameras to pick up, though. They could help us understand more about how the climate of Mars is changing, and how water is being lost to space on the Red Planet.

Those interactions emit UV light, and because the hydrogen cloud is created in part by water being lost to space, that could give scientists a way to start measuring water loss over time.

"Observations of proton auroras at Mars provide a unique perspective of hydrogen and, therefore, water loss from the planet," says physicist Edwin Mierkiewicz of Embry-Riddle Aeronautical University in Florida.

"Through this research, we can gain a deeper understanding of the Sun's interactions with the upper atmosphere of Mars and with similar bodies in our Solar System, or in another solar system, that lack a global magnetic field."

Proton auroras were first spotted by NASA's MAVEN spacecraft in 2016, and in particular its Imaging UltraViolet Spectrograph (IUVS) instrument, but this new research clarifies that they are the most common type of aurora on the planet.

"At first, we believed that these events were rather rare because we weren't looking at the right times and places," says planetary scientist Mike Chaffin, from the University of Colorado Boulder.

"But after a closer look, we found that proton aurora are occurring far more often in dayside southern summer observations than we initially expected."

The increased dust and heat of the summer causes water vapour to get lifted to higher altitudes, where it gets split into hydrogen and oxygen by the Sun's UV light. In turn, this thickens the hydrogen cloud in the atmosphere and increases the proton auroras. 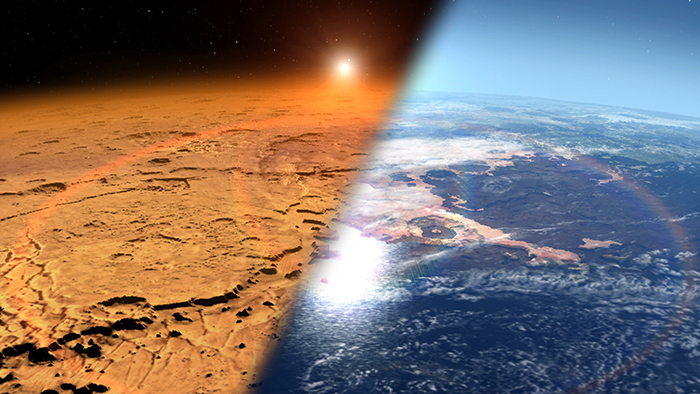 Above: Concept image showing current Martian conditions (left) and how it might once have looked (right).

These latest findings are yet to be published in a peer-reviewed journal, but we can expect more results and analysis to follow in the months and years ahead – studies that may use the UV light from these proton auroras to track water loss on Mars.

In the meantime, it's fascinating to think that spectacular auroras are visible almost every day during the Martian summertime, provided you're looking through the right equipment. It's something for those early arrivals to look forward to.

Sounds pretty neat to us.

The research has been presented at the American Geophysical Union meeting.