There are now so many of us on Earth that the planet just doesn't have enough resources for us all to live comfortably, which means we require a radical rethink of how we could start living within our means.

That's the conclusion of a new study which looked at 151 nations and found not a single one was running itself in a sustainable way – ensuring a decent life for its inhabitants without taking more than it gives back in terms of natural resources.

The international team of researchers has even put together a website showing how each country is performing in terms of balancing the well-being of its citizens against figures such as land use, CO2 emissions, ecological footprint, and phosphorus emissions.

"Almost everything we do, from having dinner to surfing the internet, uses resources in some way, but the connections between resource use and human well-being are not always visible to us," says one of the team, Daniel O'Neill from the University of Leeds in the UK.

"We examined international relationships between the sustainability of resource use and the achievement of social goals, and found that basic needs, such as nutrition, sanitation, and the elimination of extreme poverty, could most likely be achieved in all countries without exceeding global environmental limits."

"Unfortunately, the same is not true for other social goals that go beyond basic subsistence such as secondary education and high life satisfaction. Meeting these goals could require a level of resource use that is two to six times the sustainable level." 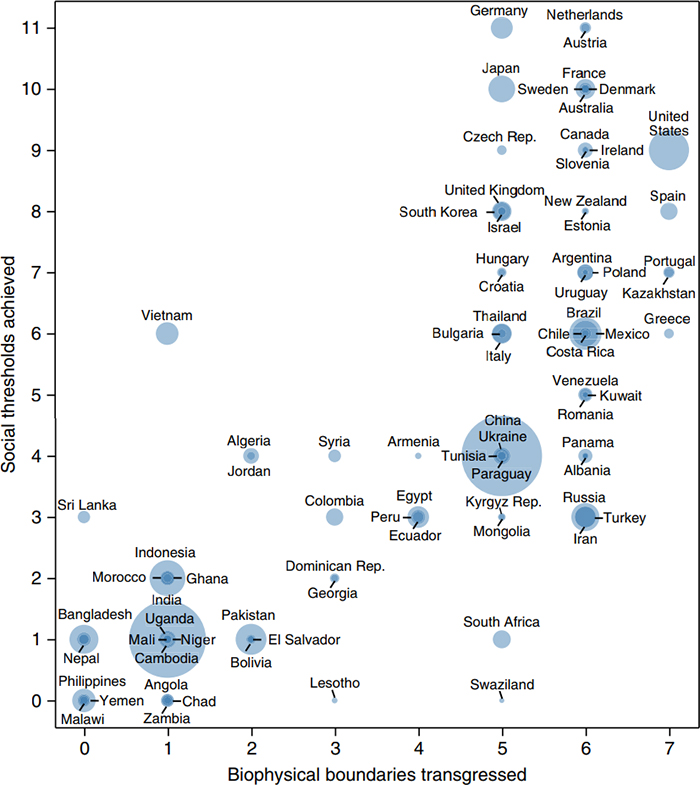 That was then measured against 7 biophysical indicators, including the ones we've already mentioned, along with material footprint, nitrogen use, and blue water use. Each country's allotted share of these resources was based on its global population.

No country performed well on both scales.

"In general, the more social thresholds a country achieves, the more planetary boundaries it exceeds, and vice versa," says one of the researchers, William Lamb from the Mercator Research Institute on Global Commons and Climate Change in Germany.

"Although wealthy nations like the US and UK satisfy the basic needs of their citizens, they do so at a level of resource use that is far beyond what is globally sustainable.

"In contrast, countries that are using resources at a sustainable level, such as Sri Lanka, fail to meet the basic needs of their people."

Using the Explore Scenarios page on the website built by the researchers, you can see the balances between living a "good life" and overusing the planet's resources, with data aggregated across all the countries covered.

Turn all the blocks green and we're living within our means, but not at the level of comfort we've become accustomed to.

And this is far from the only warning we've had about how fast we're using up Earth's resources. Previous reports have suggested we need 1.7 Earths to actually keep up with the rate at which we're plundering what the planet has to offer.

However there is some hope: the researchers say we can make adjustments to both ensure a good quality of life for the population and avoid destroying the planet at the same time.

In other words, these feedback loops – which show better lives costing more resources – are not fixed, and we can work towards finding ways to support our population without taking too much out of what the planet can give us.

"Radical changes are needed if all people are to live well within the limits of the planet," says one of the team, Julia Steinberger from the University of Leeds.

"These include moving beyond the pursuit of economic growth in wealthy nations, shifting rapidly from fossil fuels to renewable energy, and significantly reducing inequality.

"Our physical infrastructure and the way we distribute resources are both part of what we call provisioning systems. If all people are to lead a good life within the planet's limits then these provisioning systems need to be fundamentally restructured to allow for basic needs to be met at a much lower level of resource use."

The research has been published in Nature Sustainability.