As The Meg, a new sci-fi horror film about a giant shark, fills cinema screens worldwide, it's worth pausing to appreciate the animal behind the screams.

Carcharocles megalodon (or just Megalodon) is one of the most impressive creatures ever to have existed on Earth. Huge, voracious, and beautifully mysterious, megalodons were the largest known sharks to ever exist.

The species itself is only known from the fossil teeth it left behind, which can be as long as 18 centimetres (7 inches). 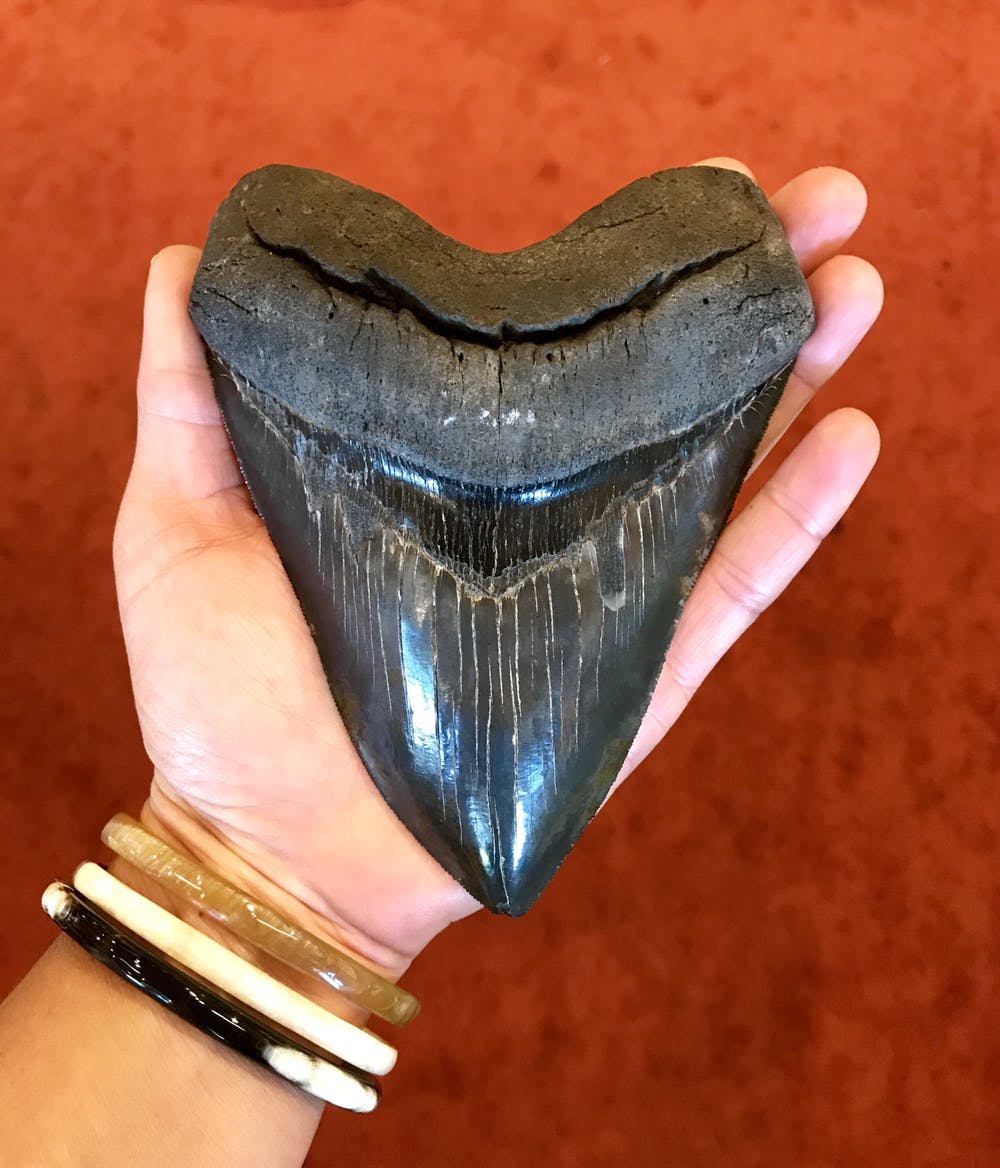 These relics suggest an appetite for whales, and scientists have used them to estimate a body size of up to 17 metres (55 feet). But despite their dying out at least 2.6 million years ago, the primal fear such a massive creature inspires is very much alive.

No other scientific discipline can fill cinema seats quite like palaeontology, but for a long time it has been dinosaurs that have ruled the ancient roost.

Films like Jurassic Park influenced a generation, and for many of us the awe and fascination on the faces of the palaeontologists was just as captivating as the beasts themselves.

Without a time machine or the budget of a film studio, most palaeontologists never get to see the movement, sound, and spectacle of their favourite long-dead animal.

Screen time is always biased towards charismatic megafauna, because exalting the charms of species that don't even merit their own Wikipedia page is a hard sell. For people to engage with the complexity of biodiversity we must first pique their interest with the big ticket beasts.

So there's an enduring public fascination with monsters, but those based in reality prompt an especially cold shiver.

With over 80 percent of the ocean unexplored, marine hunters like the megalodon make those inky black waters both terrifying and alien to us.

They also beg the question, what else was lurking in prehistoric seas? To the directors of the world I present five of the meanest extinct sea monsters that deserve their own blockbuster.

A cold-blooded dolphin lookalike from 200 million years ago, ichthyosaurs were sleek but deadly marine reptiles which were perfectly adapted for movement through water at speed, reaching lengths of 15-20 metres (50 to 65 feet) or perhaps even larger.

They were incredibly successful, conquering the world's waters and surviving 160 million years of the Mesozoic "age of the dinosaurs". Pliosaurus are another group of marine reptile from the Mesozoic, with brains similar in proportion to a great white's, bodies up to 15 metres (50 feet) long, and a set of teeth that would make a crocodile blush.

A few of the larger discoveries have inspired names such as "Predator X" from Norway, and "The Monster of Aramberri" in Mexico. 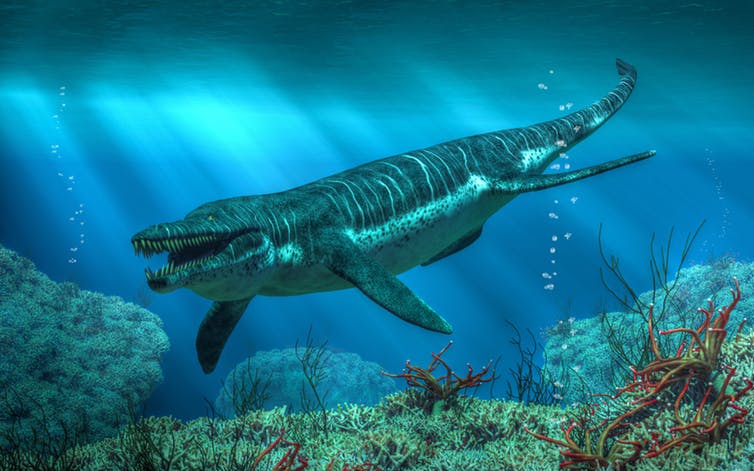 The Mosasaur takes centre stage in the Jurassic World films, but it is surely a contender for its own spin-off.

At up to 17 metres (55 feet) with rows of conical teeth, they were colossal predators. Mosasaurs were also one of the earliest and largest marine reptiles described, holding a special place in the history of palaeontology. Xiphactinus audax was a 5-6 metre (16-20 foot) bulldog-like bony fish with ice pick teeth that lived in the Late Cretaceous. While there were certainly larger species of shark around at that time, the body shape and tail of the "X-fish" made it a lightning fast and active hunter.

Several specimens even have their last meal preserved, including the famous "fish-within-a-fish" fossil. Basilosaurus, meaning "king lizard", is actually an early whale, found in Jordan and Egypt during the Eocene period, around 40 million years ago.

As well as growing to 15-18 metres (50 to 60 feet) in length with a mouth full of bone crushing teeth, it had mammal intelligence, making it a uniquely terrifying adversary. 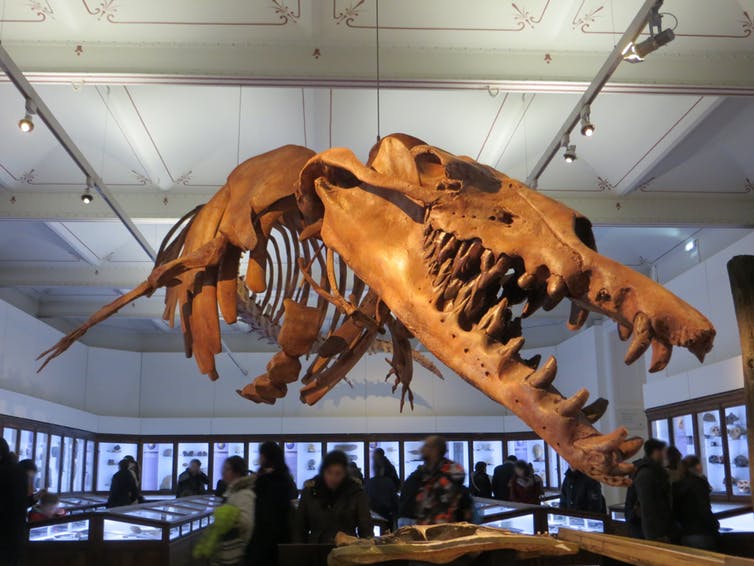 With over 99 percent of species that have ever existed now extinct, it's surprising that the fossil record hasn't been pillaged more thoroughly for its eclectic range of monsters.

Perhaps species like the megalodon are what we should hold aloft to make us appreciate what has been, and what is being lost.

Identifying the megalodon's closest living descendents has been difficult, but the largest close relative is the great white shark (Carcharodon carcharias), of which David Attenborough once said:

The animal glides, dreamlike through its watery world and in to our subconscious. It's one of the last great predators to roam free on the planet, a creature of fearful symmetry.

Sadly, the poetry of millions of years of natural fine-tuning has been lost in a mob chorus of fear and ignorance.

The "Jaws effect" reduced the great white shark's public image to that of a mindless killer, and even author Peter Benchley came to regret the film's fallout.

All species of shark are now at risk from an even greater and more violent predator, one that prizes sharks as trophies or for their livers and fins. Conservative estimates indicate humans are responsible for killing 11,000 sharks per hour, with up to 273 million plucked from the ocean every year.

The shark's only hope is our education, and Hollywood can do its bit by focusing on the beasts we needn't fear when we leave the cinema. It is an upsetting time to be a shark researcher, as the flower fades on over 420 million years of evolutionary history.

We can only hope that film makers have learned their lesson from films like Jaws, and begin to use the power of movie magic to elicit awe and curiosity where there was once fear.