Here's Why Stress Could Make Your Hair Fall Out, According to New Mouse Study

Stress has long been linked to causing hairs to turn gray or stop growing altogether, but we haven't understood the exact reasons why. A new study in mice could now answer some key questions about that all-important link between stress and our hair.

Not only have researchers identified a major stress hormone that puts an extended pause on hair growth, they've even figured out the cell type and molecule responsible for transmitting the stress signal.

If these findings are successfully translated to human biology, we might finally crack the code that links chronic stress to hair loss, thus giving medical researchers the opportunity to do something about it.

"The skin offers a tractable and accessible system to study this important problem in depth," says biologist Ya-Chieh Hsu from Harvard University. "In this work, we found that stress does actually delay stem-cell activation and fundamentally changes how frequently hair follicle stem cells regenerate tissues."

The hair follicle controls hair growth in mammals, and the stem cells found within naturally cycle between periods of growth and periods of rest. First, the researchers confirmed that stressing out mice did indeed limit hair growth by extending the time that the stem cells were resting for.

Next, they identified corticosterone as the stress hormone responsible. Giving mice extra corticosterone had the same effect on the hair stem cells as actually stressing the animals out with relatively harmless techniques such as cage tilting and flashing lights.

Surgically removing the source of the stress hormones reversed the effect: the hair follicles on the mice kept regenerating with very little pause for rest, even as the animals got older (as mammals age, the follicles usually become less active).

That suggests even normal levels of corticosterone in mice have an important regulating effect when it comes to hair growth, and additional stress could well be the reason why hair follicles and their stem cells become dormant for longer.

"We first asked whether the stress hormone was regulating the stem cells directly and checked by taking out the receptor for corticosterone, but this turned out to be wrong," says biologist Sekyu Choi from Harvard University.

"Instead, we found that the stress hormone actually acts on a cluster of dermal cells underneath the hair follicle, known as the dermal papilla." 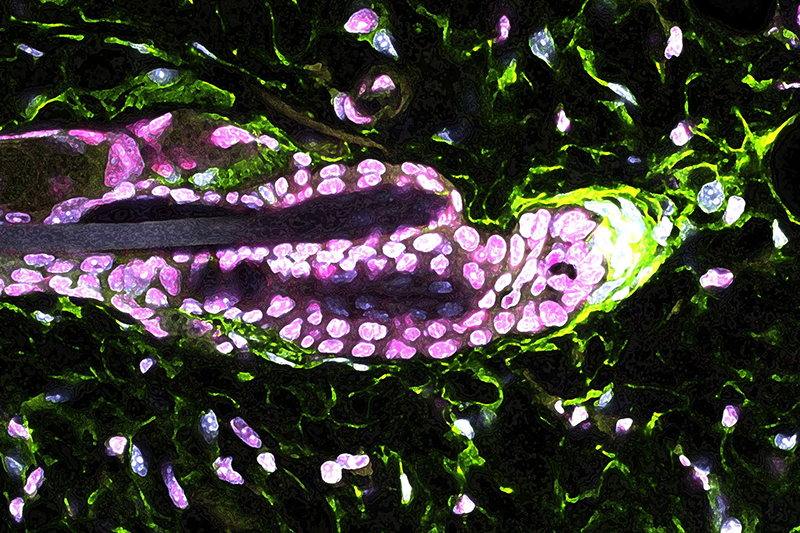 Further tests showed that adding GAS6 on top of both normal and elevated corticosterone levels in the mice activated the hair follicle stem cells and promoted hair growth via the protein AXL that passes the message on.

The key question is: do human bodies work in the same way? We have our own equivalent stress hormone called cortisol, but more research will be needed to determine if it reacts in the same way as corticosterone does in mice.

There are also some differences between how the hair growth cycle works in mice and humans, although much of the biological machinery for mammal hair is truly similar across the board.

All that said, these are promising findings and could lead to hair growth treatments that are much needed – not least because a quarter of those who contract COVID-19 have issues with hair loss. Stress can be good for the human body in the right amounts, but it can cause plenty of damage, too.

"In the future, the GAS6 pathway could be exploited for its potential in activating stem cells to promote hair growth," says Choi. "It will also be very interesting to explore if other stress-related tissue changes are related to the stress hormone's impact on regulating GAS6."