Dating back to around 92 million years ago, the two tyrannosaurs hail from the Zuni Basin in New Mexico. They stood just 1 metre (3 feet) tall and have been named Suskityrannus hazelae.

"This taxon, S. hazelae [..], is a small-bodied species phylogenetically intermediate between the oldest, smallest tyrannosauroids and the gigantic, last-surviving tyrannosaurids," the researchers wrote in their paper.

Palaeontologists think this is the result of high sea levels that flooded the continents, eroding sediment and decreasing the potential for bones to be preserved.

Whatever the reason, it's been a spanner in the works for uncovering the evolutionary history of the mighty T. rex. But now some tyrannosaurid bones from those dark ages are starting to be uncovered - confirming that the great hunters could have emerged from smaller ancestors.

A 'missing link' tyrannosaur called Timurlengia euotica from 90 million years ago was recently found in Uzbekistan. It was about the size of a horse.

Another, dating back 96 million years ago, was just described in a paper earlier this year. Moros intrepidus was a little smaller than a kangaroo, and ran around what is now Utah.

Including S. hazelae, these three species are all from the Middle Cretaceous, which makes them unlikely to be direct ancestors of T. rex. Instead, palaeontologists believe all these animals diverged from a common ancestor sometime in the Early Cretaceous, which ended roughly 100 million years ago.

The S. hazelae skeletons recovered show a tyrannosaurid that was about coyote-sized (hence the name - suski is the Zuni word for coyote), weighing no more than between 20 and 40 kilograms (44 to 88 pounds). Its skull was between 25 and 32 centimetres in length (10 to 12.5 inches), and its entire body was just a little bigger than the mere skull of a T. rex. 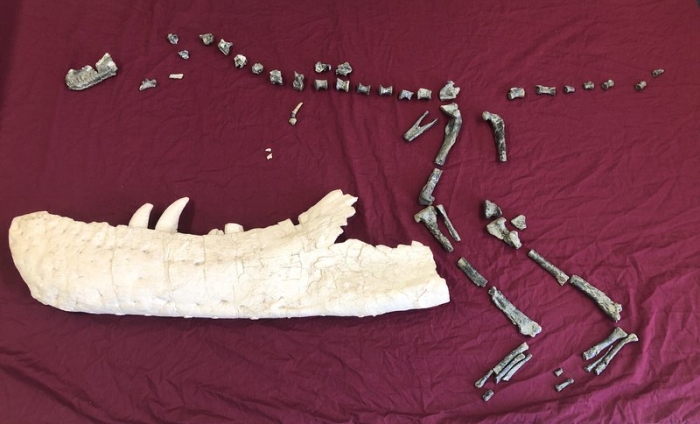 Both skeletons were juveniles, so it's possible they would have grown a little bigger, but probably not by much - the palaeontologists believe these pipsqueaks where already teenagers.

But despite its small size, the tiny tyrannosaur was no slouch. Its jaw indicates that it would have had a very strong bite, like the later tyrannosaurs; other features show it was fleet of foot, like the earlier ones. S. hazelae, somewhere in the middle, could hold its own.

And it has big significance, too. By filling in the fossil record, it could help palaeontologists figure out why tyrannosaurids changed so dramatically, and so fast.

"It is unclear why these animals were drastically changing so many aspects of their anatomy and biology during the mid-Cretaceous. This may have been related to some of the environmental changes occurring during this time, although the sparse fossil record makes this difficult to test," the researchers wrote in their paper.

"Alternatively, these developments may have been adaptations for hunting at medium size, in ecosystems where late-surviving allosauroids remained incumbent in the top predator niche earlier in the Cretaceous."