Scientists Took Mentos And Coke to The Top of a Mountain, For Science

Adding pellets of Mentos mint candy to carbonated beverages has been a science fair staple for years. While most ten-year-olds can tell you why it spews up a geyser of foam, certain microscopic features of the reaction haven't been so easy to figure out.

A chemistry professor at Spring Arbor University in the US joined forces with a Colorado high school teacher to map the reaction right at the crucial moment, revealing intricate new details on the sizes of bubbles that generate the fountain of fizz.

To do it, they went a little farther than the gymnasium or teachers' car park. This experiment took them almost literally to the ends of the Earth, from Death Valley in California to the tip of Pikes Peak in the Rocky Mountains.

Thanks to its simplicity, safety, and low cost (not to mention popularity on early social media), the Mentos and Coke activity is a classroom perennial for demonstrating a variety of principles in chemistry and physics.

At a basic level, the explanation behind the reaction is fairly straightforward: carbon dioxide is dissolved into Coke under pressure. Cracking the lid on the bottle changes the pressure, allowing some of the gas to fall out of solution and dissolve into the atmosphere according to good old gas laws.

Exposing more of the solution to the surrounding air allows more gas to escape (for example, if one were to shake the bottle); a Mentos candy just speeds this process up in a dramatic fashion.

Previous studies have shown that tiny pits in the candy shell provide the perfect traps for tiny air bubbles, so when one of those white discs sinks into the drink, its surface provides an expanse of air for dissolved carbon dioxide deep inside the bottle to rush into and fill.

Until now, the exact size of those tiny nucleation bubbles could only be estimated based on micrographic images of the candy's textured shell.

It's not a trivial question, either. For carbon dioxide to leave the solution, each bubble needs to provide the right amount of surface area for plenty of gas to flow.

Theoretically they need to be bigger than one micrometre across, but larger bubbles also take up more room, reducing the number of nucleation sites and potentially affecting the overall flow rate.

Since there's no easy way to capture the moment visually, solving it demands some clever use of key relationships in physics, which means putting numbers to variables such as pressure and volume.

Spring Arbor University chemist (and self-proclaimed Mentos and Coke fan) Thomas Kuntzleman had noticed the reaction is far more dramatic when carried out at high elevations.

Back in 2018, Kuntzleman had a father's day present he was keen to take advantage of. He had permission from his family to take his favourite experiment out on a country-wide road trip to run trials out in the real world. 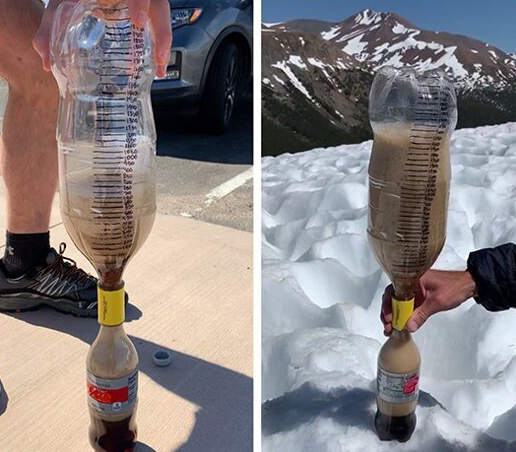 "To do so, we carried out the experiment in many places around the US at altitudes that ranged from below sea level in Death Valley to over 14,000 feet (4,300 metres) at the top of Pikes Peak," Kuntzleman told the science blog Improbable Research.

"We had an absolute blast."

Meanwhile, he roped in his science teacher buddy Ryan Johnson to conduct his own trials on the slopes of a mountain in Colorado. (You can see how much fun they had in Kuntzleman's YouTube clip below.)

They found that air pressure alone couldn't account for their observations, leaving room to deduct finer variables that contribute to the foaming action.

Combining data from variations in air pressure with measurements on the mass lost by degassing, along with comparisons between different candies, Kuntzleman and Johnson soon had a pretty good idea of why Mentos is a prime choice for this kind of activity.

Their conclusion is also a relatively close fit for micrographic pictures of the pits in the candy's shell, building on existing models explaining the famous demonstration.

No doubt the results are great news for the Mentos marketing team as they come up with future slogans. But the real winners will be teachers looking for data to use in training their budding chemists and physicists.

We can't wait for the next generation of Mentos and Coke science fair posters!

This research was published in the Journal of Chemical Education.