The main types of dog coats we see today have been around since the earliest days of domestication, according to new research. Some patterns might even outdate wolves themselves.

Until now, it's often been assumed that our species was responsible for the huge diversity of dog coats due to thousands of years of careful breeding. But a recent analysis of modern and ancient dogs and wolves suggests we might have given ourselves too much credit.

Geneticists have instead found evidence that natural selection more than 10,000 years ago probably provided a genetic basis for the dog coat patterns we see today.

"While we think about all this variation in coat color among dogs, some of it happened long before 'dogs' were dogs," explains geneticist Danika Bannasch from the University of California, Davis.

"The genetics turn out to be a lot more interesting because they tell us something about canid evolution."

ASIP is known to determine the color of a dog's coat by controlling the expression of yellow pigmentation (which can look tan or white). When combined in different ways, certain modulators of the ASIP gene appear to produce five distinct color patterns: dominant yellow, shaded yellow, agouti (two or more bands of different pigments on a hair), black saddle, and black back, as shown below. 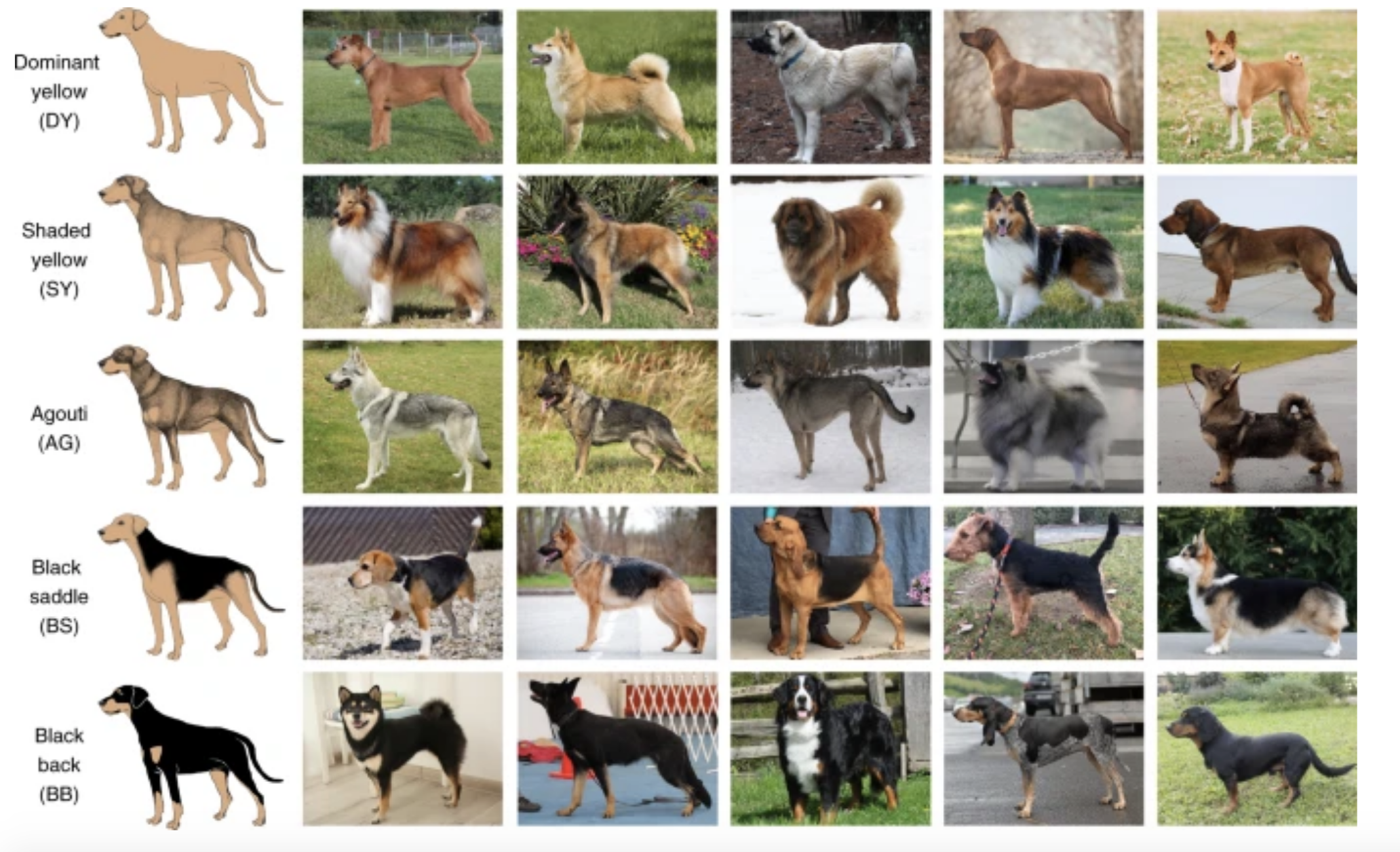 When comparing the genomes of modern dogs to modern gray wolves, researchers found agouti dog genes – which can create a range of speckled looks, including salt and pepper – were expressed similarly in both groups.

This indicates a shared relative with both black and white pigments expressed. To figure out who that was, researchers looked back even further. When comparing the genomes of ancient dogs and wolves, dated between 4,000 and 35,000 years old, they once again found similar colorings.

In fact, one particular species of ancient dog from nearly 10,000 years ago – the Zhokhov island dog from Siberia – already showed the black back pattern, making it quite distinct in its Arctic environment.

This suggests the modulators for the ASIP gene were at work in the earliest stages of dog domestication, which is dated somewhere between 14,000 and 30,000 years ago.

"Thus," the authors write, "diversity in ASIP regulatory sequences responsible for color variation today was apparent by 35,000 years in ancient wolves and by 9.5 thousand years in ancient dogs."

Today, Arctic gray wolves, which appear more white, express mostly yellow pigments in their fur, while gray wolves express more black pigments. Dogs can show a little of both, suggesting an exchange of genetic information from the common ancestor of white and gray wolves.

In fact, in the current study, the dominant yellow haplotypes of dogs were nearly identical to the Arctic gray wolves, which suggests they traded genetic information long, long ago.

When the team tried to create an evolutionary tree with their new findings, they discovered the last common ancestor for Arctic gray wolves and dogs probably dates back at least 2 million years.

"We were initially surprised to discover that white wolves and yellow dogs have an almost identical ASIP DNA configuration," says geneticist Chris Kaelin from the HudsonAlpha Institute for Biotechnology in Huntsville, Alabama.

"But we were even more surprised when it turned out that a specific DNA configuration is more than 2 million years old, prior to the emergence of modern wolves as a species."

During this time, the icy North of our planet was going through a glaciation period, which means a whiter coat would probably be more advantageous to a canid predator.

When wolves later showed up, they merely carried on this trait. Only much later did humans take up the genetic framework and run wild with it.

The study was published in Nature Ecology & Evolution.