American Teens Are Frightened by Climate Change, But They're Starting to Take Action

In a coastal town in Washington state, climate change has a high school junior worried about the floods that keep deluging his school. A 17-year-old from Texas says global warming scares him so much he can't even think about it.

But across the country, teens are channeling their anxieties into activism.

"Fear," said Maryland 16-year-old Madeline Graham, an organizer of a student protest planned for this week, "is a commodity we don't have time for if we're going to win the fight."

A solid majority of American teenagers are convinced that humans are changing Earth's climate and believe that it will cause harm to them personally and to other members of their generation, according to a new Washington Post-Kaiser Family Foundation poll. 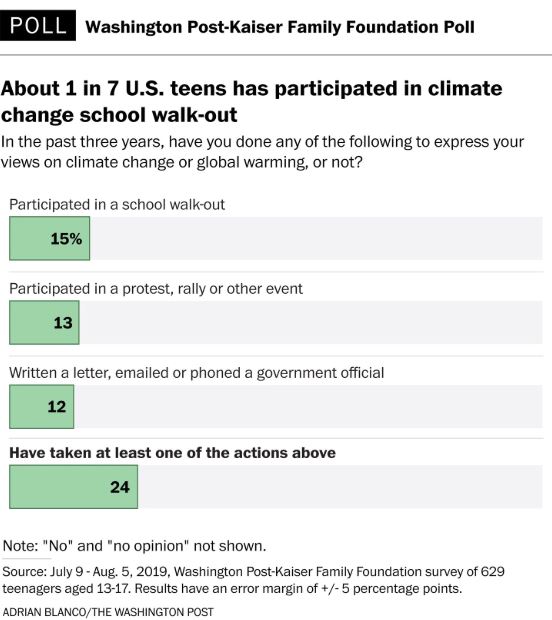 Roughly 1 in 4 have participated in a walkout, attended a rally or written to a public official to express their views on global warming — a remarkable level of activism for a group that has not yet reached voting age.

The poll by The Post and the Kaiser Family Foundation (KFF) is the first major survey of teenagers' views since the explosion of the youth climate movement last year.

Inspired by 16-year-old Greta Thunberg, whose year-long "strike" in front of the Swedish Parliament and carbon-neutral sailboat voyage across the Atlantic have made her an activist icon, growing numbers of teens have been skipping school on Fridays to protest on behalf of something they say is more important. This week, in the run-up to a major UN summit, hundreds of thousands of schoolchildren plan to abandon their classrooms to demand more-aggressive measures to protect the planet.

"People feel very guilty when a child says, 'You are stealing my future.' That has impact," Thunberg told The Post.

"We have definitely made people open their eyes."

More than 7 in 10 teenagers and young adults say climate change will cause a moderate or great deal of harm to people in their generation, a slightly higher percentage than among those 30 and older.

By the time today's high schoolers turn 30, scientists say, the world must achieve a "rapid and far-reaching" transformation of society to avoid warming's most dire consequences. 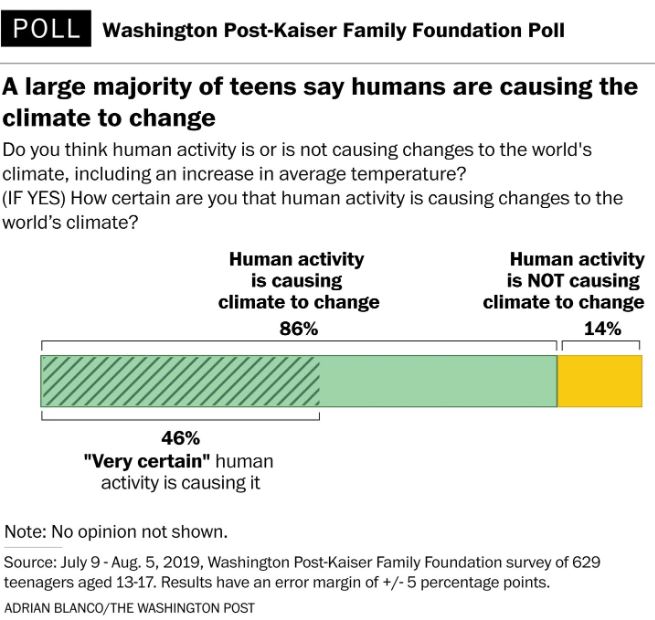 Several teenagers told The Post they are already feeling its effects.

Gabe Lopez, 16, of Everett, Washington, said warming waters have taken a financial toll on relatives who fish in the Pacific.

"To grow up seeing the world fall apart around you and knowing it's going to be the fight of your lives to make people stop it."

Lopez and Graham said thinking about climate change makes them afraid, an emotion they share with 57 percent of teens nationwide. Fewer than a third of teens say they are optimistic. "A lot of it is connected to being a kid," Lopez said. "We can't vote. We don't have anyone to represent us."

Adults, he said, don't seem to take the issue as seriously, or as personally, as people his age. Lopez recalled getting into an argument with his driving instructor after the older man was dismissive of students' anxieties about climate change.

Adults think, " 'Oh you're so young, you don't know what you're talking about,' " he said. "But I know the facts, and I know what the most drastic consequences will be. I know that people aren't doing what needs to be done."

Teens are slightly more likely than adults to accept the scientific consensus that humans are causing global warming, 86 percent vs. 79 percent. But in other ways, kids are much like the rest of the country when it comes to climate change.

Roughly a third of teenagers and adults say the issue is "extremely important" to them personally.

Just under half believe the United States must drastically reduce its fossil fuel use in the next few years to avoid the worst effects of climate change. And roughly 4 in 10 say mitigating the effects of warming will require major sacrifices from ordinary Americans.

Teenagers also share adults' questions and misconceptions about the ways the world is warming. In both age groups, no more than 2 in 10 say they know "a lot" about the causes of climate change and ways to reduce it.

Sizable minorities of teens incorrectly believe that phenomena such as volcanic eruptions and the sun getting hotter are major contributors.

Despite many teens' strong feelings about the issue, fewer than half say they've taken action to reduce their own carbon footprints. Their most common approaches are recycling, limiting time in cars and reducing plastic use. And most say they rarely or never discuss the issue with family and friends.

Meanwhile, the number of teenagers who say they are being taught in school how to mitigate climate change appears to be on the decline. Fourteen percent say they have learned "a lot" about the subject, down from 25 percent in 2010, when the Yale Project on Climate Change asked a similar question.

The high school junior said he learned nearly everything he knows about climate change from reading the news and searching the Internet. What he found scares and angers him.

"We're killing the thing we live on," he said. "By the time that I'm old, I know I will see more impacts starting to happen."

Riley, who is black, believes that minorities and people in low-income communities will be most severely affected by warming, because they are more likely to live in vulnerable areas and less likely to be able to insulate themselves.

"The wealthier you are, the more protection you have," he said.

The Post-KFF poll finds black and Hispanic teens express a greater sense of urgency around climate change; 37 percent and 41 percent, respectively, say people need to act in the next year or two, compared with 24 percent of white teens.

Teens who do not think that human activities are affecting the planet are in the minority. Jane Palmer, 13, of Chubbuck, Idaho, said she doesn't see how people can influence the climate when Earth has been changing for millions of years.

When her eighth-grade science teacher told her class that fossil fuel use is warming the globe, her mother dismissed those lessons as "fearmongering".

Still, Palmer has noticed that summers in Idaho are getting hotter. She worries that many people "don't really care about the Earth" and says she is still thinking the issue through.

"I'm kind of in between," she said. "It is a problem, but it's also not that big a deal. Teachers should talk about it and let us know what's happening in the world, but they shouldn't . . . make it seem like the world is going to end."

Many of her peers disagree: About 4 in 10 of those under 18 call climate change a "crisis". But unlike adults, most teenagers say they don't feel helpless. More than half — 54 percent — say they feel motivated.

"When you're facing something like that, and you're 16 years old, and your mom's yelling at you, and you have classes, and, on top of that, everybody's going to die . . . it's easy to let fear overtake you."

The Post-KFF survey was conducted online and by telephone from July 9 to August 5 among a national sample of 2,293 adults and 629 teenagers through AmeriSpeak, a survey panel recruited through random selection of US households by NORC at the University of Chicago.