Most of The World's Humpback Whale Populations Are No Longer Endangered

Let's take a moment to savour a major ecological win: most of the world's humpback whale populations are now no longer endangered.

Once hunted to the brink of extinction because of their oil and meat, humpback whales have benefitted from recent international efforts to restore their numbers, according to a new population survey.

Since 1970, humpback whales have been classed as "endangered" under the US Endangered Species Act. But earlier this week, 9 of the 14 distinct groups of humpback were taken off the endangered list. Four remain endangered and one remains "threatened".

"Today’s news is a true ecological success story,” said Eileen Sobeck from the US National Oceanic and Atmospheric Administration (NOAA). "Whales, including the humpback, serve an important role in our marine environment."

Last year's decision to split humpback whales into 14 separate populations helped to focus conservation efforts and identify the groups of whales under most threat, according to Sobeck.

Despite the change in conservation status for many of these populations, humpbacks will continue to be protected by various national and international laws. Shipping vessels will have to stay a certain distance away from the whales off the coasts of Hawaii and Alaska.

"Many of the day-to-day protections and activities will continue to occur," the NOAA's Angela Somma told reporters. 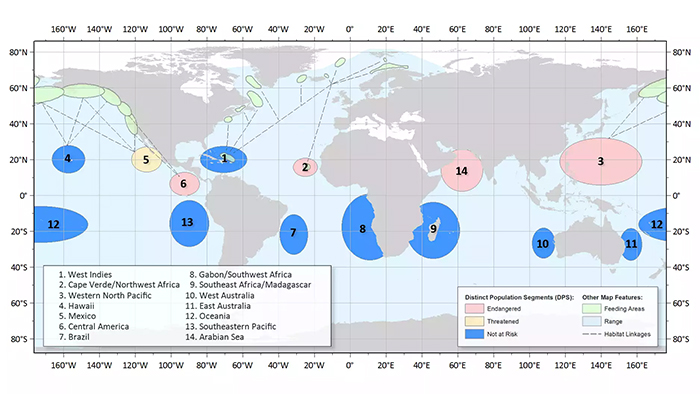 The NOAA's updated humpback whale chart, with "not at risk" groups shown in blue. Credit: NOAA

And there's still a lot of work to do. One group that breeds in Central America remains endangered, and is thought to be down to just 400 in number. Colliding with vessels and getting entangled in nets are two of the primary threats remain for humpbacks.

But other groups are bouncing back strongly. The NOAA says humpback whale populations off the coasts of the West Indies and east Australia are growing at a rate of 3.1 percent and almost 11 percent respectively.

Sometimes it can feel like there's not much to cheer about when it comes to humankind's impact on wildlife, with researchers this week reporting that the eastern gorilla - the largest living primate in the world - is now just one step away from extinction.

But our success with humpbacks is a great example of how animal conservation efforts can make a genuine difference to wildlife populations and pull species back from the brink.

Giant pandas have also recently been downgraded from endangered to "vulnerable", with population levels rising 17 percent in the last decade. With charities, governments, and communities working together, we really can protect the animals we share a world with.