A juvenile freshwater crocodile that showed up in the suburbs of Melbourne in Australia's southeast has now been claimed by a number of people who have stepped forward, each saying the animal is their pet.

The 1-metre (3.2-foot) crocodile was found on a quiet street on Christmas day, chilling out on a footpath, and no one knows how it got there. Police called a reptile handler, Mark Pelley, who is keeping the animal safe for now.

Australia may be somewhat famous for its crocodiles, both freshwater and the larger and much more dangerous saltwater, but if you want to see them in their natural habitat, you have to head to Australia's far north - they prefer warmer climates, and rarely venture into the country's southern regions. 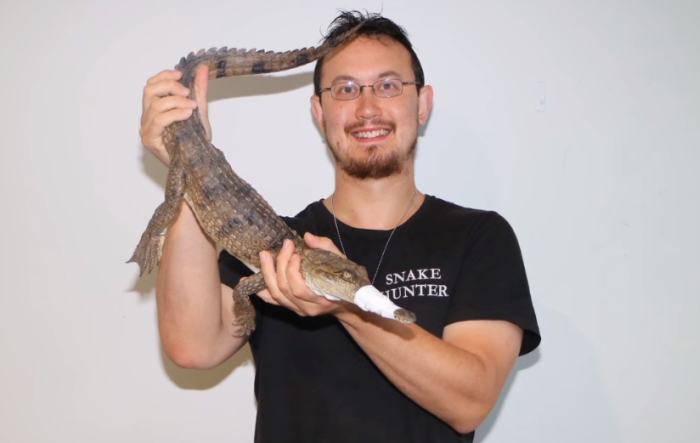 To get to Melbourne in Australia's far south is a distance of at least 2,500 kilometres (1,553 miles), so suffice to say that the reptile didn't just end up there after a stroll.

"We're running on the presumption that it was a pet at some stage, it's a long way from any bodies of water so we don't think it would be able to make its way [to the street]," Acting Sergeant Daniel Elliott of the Victoria Police told ABC News.

Owning a native crocodile as a pet is legal in some (not all) parts of Australia, but it requires an advanced wildlife licence and a suitable habitat with enough room for the animal - freshwater crocodiles grow up to 3 metres (9.8 feet) long - plus the appropriate amenities.

This includes enough water for the crocodile to swim in, and heating lamps to keep it warm in the colder months - especially important in the cooler climate of Australia's far south, where the animals would struggle without it. Crocodiles also need a lot of food, Pelley said.

With a recent study finding that up to 75 percent of pet reptiles die in their first year living in a human home, these stringent requirements are in the best interests of the animals, and apply in varying degrees to ownership of all native reptiles in Australia.

After recovering the animal, police put out a call to find the owner of the mystery crocodile, and that's where the story gets even stranger.

As of 27 December, four people had called Pelley claiming the croc was theirs - which frankly is a whole other kind of mystery, because just how many people are actually misplacing juvenile freshwater crocodiles in Melbourne?

To avoid a Judgement of Solomon situation, Pelley said he was going to hand over the crocodile to the Victorian government Department of Environment, Land, Water and Planning.

"It's the responsible thing to do," he said. "I wouldn't want to hand it to the wrong person."