8,000-Year-Old Smashed Skulls on Spikes Found in Sweden, And Nobody Knows Why

Archaeologists in Sweden have unearthed human remains of a type never before found in Scandinavia.

The enigmatic Mesolithic bones show evidence of blunt force trauma to several skulls - and evidence that heads were displayed on stakes. But none of it is straightforward, which presents a number of really intriguing mysteries.

For one, the bones show evidence of healing, which means the blows to the head weren't necessarily what killed these people.

There are also signs that the bodies were buried prior to their heads being exhumed, and the skulls being mounted on spikes.

If you're wondering what the heck happened, you're in good company: the archaeologists from Stockholm University in Sweden are also baffled.

The bones were found some years ago, during excavations between 2009 and 2011 at a peat bog site called Kanaljorden near the Motala ström river system in central Sweden.

They were unlike anything found before, and the pattern in which they were laid out, in the lime sediment at the bottom of what was once a lake, suggested a ceremonial purpose.

Now a team of researchers has completed an analysis of the assemblage, including skulls or skull parts from at least 10 individuals.

When they were excavated, two of the skulls were found to be mounted on stakes, driven straight through the bottom of the skull to the top.

In the lake, there had once been a compacted stone platform, possibly where rituals were conducted, with the remains of two settlements on the banks nearby showing a hunter-gatherer culture had been active in the area.

Radiocarbon dating indicated the remains are from the Mesolithic period, sometime between 5500 and 6000 BCE - around 8,000 years ago.

Animal bones from at least seven different species, including boar, bear and badger, were arranged around the skulls. Marks on these bones suggested the animals were butchered after death, but not for eating, since there was no evidence of fire on the bones.

The human skulls is where things get peculiar. Nine of the 10 distinct individuals were adults, and the researchers identified two of them as female, and four as male. Another two heads belonged to people aged between 20 and 35, and one was over the age of 50.

The remaining individual, known from a complete skeleton, was either a foetus or a newborn, aged between 36 and 40 weeks, indicating that the baby had died very shortly before or after being born. 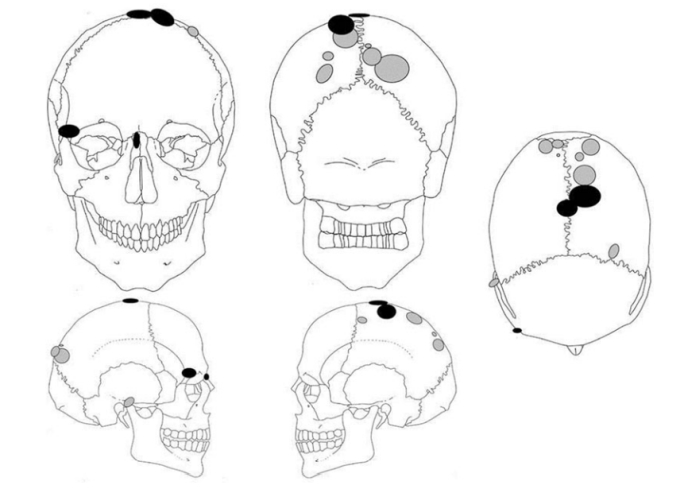 The male trauma injuries are shown in black, the female in grey. (Gummeson et al./Antiquity)

Of the adult skulls, seven had shallow blunt force trauma injuries. Both females had been hit on the back of the head multiple times, while the males were hit once on the top of the head.

There was also evidence that some of these injuries had healed - so they may not have died from a blow to the head.

It's impossible to identify the weapon that made the wounds, but they do seem to have occurred by violence rather than accidents. They are too similar to each other, and above what's known as the hat-brim line, making them unusual for accidental injuries.

"These are not people who have been recently smashed in the head and then put on display," one of the team, Fredrik Hallgren told National Geographic. "More than half of them had this healed trauma to the head."

The most likely explanation is inter-group violence such as raiding and warfare, the researchers said. This would explain the healed traumas, and the different injuries for men and women could be because they played different roles in combat.

There's also evidence to suggest the bodies had been buried, before the heads were dug out and placed in the lake. Most of the skulls were missing their jawbones, with no markings to suggest that they had been forcibly removed.

Instead, this suggests the bodies were at least partially decomposed - although the presence of preserved brain matter in one of the skulls also suggests they could have been deposited not long after death.

This could also have been achieved by exposing them to the elements, but the lack of tooth marks from the wild animals that would have inevitably been attracted to the rotting corpses suggests they would have had to have been protected somehow.

Then there are the stakes. The team found over 400 wooden stakes, either intact or fragmented. Some could have been used as a partition or fence; others, as indicated by skulls with stakes inserted through the hole in the base of the skull for the spinal cord, to mount human and animal heads, the researchers said.

Research to figure out why the skulls were in the lake is ongoing, as well as searching nearby bogs in the hopes of finding similar sites.

But one thing, the researchers said, is clear: the skulls had to have been placed in the lake on purpose.

"The deposition can be described as being carefully planned and executed, from the construction of the underwater stone packing to the spatially separated depositions of curated human and animal remains," they wrote in their paper.

"The fact that the majority of the individuals show healed injuries seems to be more than a coincidence and implies that they were specifically chosen for inclusion in the deposition."

Let's hope that future discoveries at the site will bring some clarity to this bizarre story.

The paper has been published in the journal Antiquity.