Every year, Siberia is struck by wildfires that destroy great swathes of boreal forest.  But climate change has caused wildfire activity in Siberia to increase radically over the past few decades.

The boreal forests in Siberia are burning at extraordinary rates, unheard of in at least 10,000 years, and climate change projections predict even more wildfires to come.

The current wildfires, which started in late June, have already burned roughly 538 square kilometres (133,000 acres) of forest in southern Siberia.

Climate change has been increasing temperatures across the globe, but northernmost regions, like Siberia, are experiencing temperature inclines at twice the rate.  Since November, temperatures in southern Siberia have been up 4°C (7.2°F) from the average.  And as the weather turns drier and warmer, the forests in the region become more and more prone to wildfires.

These wildfires are a direct threat to the role of Siberian forests in absorbing carbon emissions. 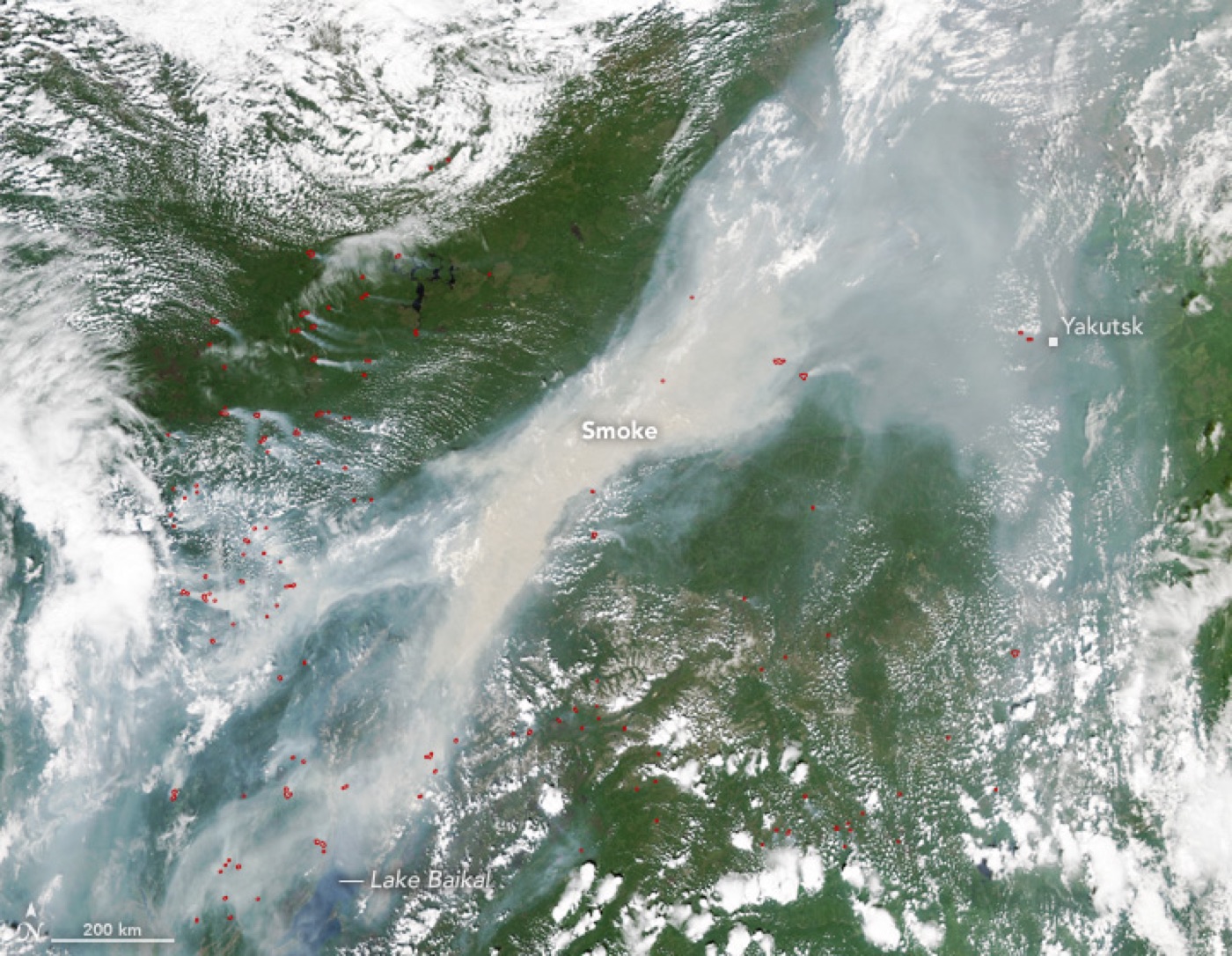 Each year, the Russian forests absorb a net 500 million tonnes of carbon from the atmosphere.

Last Friday, two NASA satellites captured the destructive and widespread impact of these wildfires on the region.

The images from the Aqua satellite reveal a series of wildfires and towers of smoke, riddled across southern Siberia.

The second satellite, Suomi NPP, measured the air quality in the region and found the aerosol index reached over 19, indicating very dense smoke at high altitudes.

According to NASA Earth Observatory, scientists are also currently investigating three possible pyrocumulus cloud formations in the area, which can alter local climates by lofting ash and particles high into the atmosphere.

But the most devastating impact of these wildfires cannot be seen from a satellite.

That means that when these forests burn, they are releasing vast quantities of carbon into the atmosphere. The loss of carbon absorption in combination with the release of carbon, creates a vicious cycle that leads to more global warming and, as a result, more wildfires.

Not to mention, these wildfires can also hasten the melting of Arctic ice, which is already disappearing at alarming rates. This occurs when the fires produce hordes of soot that fall on snow and ice, darkening their surface and causing them to absorb more sunlight.

And it's not just Siberia, either.

Over the past decade, global warming has caused a series of destructive wildfires in Canada and Alaska, too. Last year, a wildfire in Fort McMurray, Alberta became the costliest natural disaster in Canadian history.

And, according to Climate Central research, wildfire season in Alaska is 40 percent longer and large fires twice as common as they were 75 years ago.

Finding a way to stop these wildfires from occurring or from burning out of control will be pivotal in our fight against climate change.

Scientists have their work cut out for them.