NASA Announces a Dark, Eerie Moon Landing Site For Its Next Rover Mission

Visualization of the Nobile region. (NASA)

NASA is embarking on a new Moon shot, aiming to one day build a permanent crewed station on the lunar surface. Before it sends any people, though, the agency is launching a golf-cart-sized robot to the Moon's freezing, shadowy south pole.

The rover, called the Volatiles Investigating Polar Exploration Rover (VIPER), will spend 100 days mapping out water sources – the first such survey of the lunar south pole.

Eventually, NASA hopes to set up a permanent base there, then use it to springboard the first human missions to Mars as early as the 2030s. That's why it's important to know where water is: It can be broken down into its component elements, hydrogen and oxygen, and both of those can be turned into rocket fuel.

Flying humans to Mars will require a lot of propellant, which is incredibly heavy for a rocket to carry as it lifts off from Earth. So fueling up on the Moon may be necessary for NASA to send astronauts to the red planet.

"Where there's water, there's fuel," NASA Administrator Bill Nelson said in a town hall on Tuesday. "That could well be a gas station for us in the future." 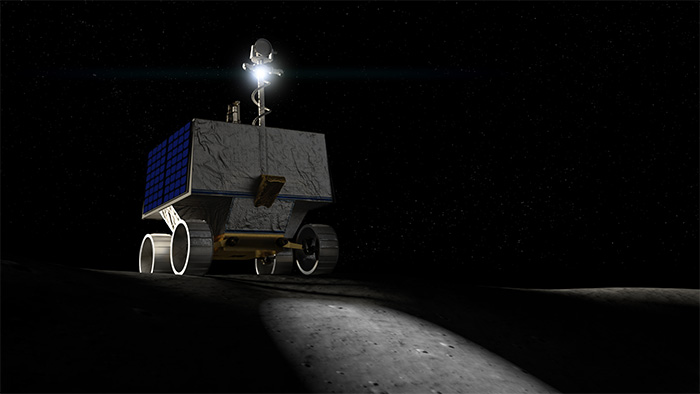 On Monday, NASA announced that it has chosen a landing site for VIPER to search for that gas station: a mountainous region next to the Moon's Nobile Crater. The agency plans to send the robot there in 2023.

That area is up high in a mountain range, which will help NASA maintain communication with the rover from Earth. It also hosts a variety of environments – from permanently shadowed craters at nearly -400 degrees Fahrenheit to sunny regions that are closer to 0 degrees.

Spacecraft orbiting the Moon have already identified signs of water on the south pole, but NASA doesn't know precisely where that water is or what its chemical makeup is like.

"When we're down there on the Moon, working with scales that you and I are more familiar with than orbital scales, we really don't know where that water is," Anthony Colaprete, lead scientist on the VIPER project, said in a briefing on Monday.

"We wanted to broadly understand a range of environments on the Moon. The Nobile region offered that."

VIPER will be NASA's first Moon rover in 50 years. If successful, it will also be the first machine to ever land on the Moon's south pole without deliberately crashing.

VIPER will follow 'corridors of light' and dip into ancient shadows

VIPER will land in an exceptionally shadowy region of the Moon.

"The poles of the Moon are dramatic, especially the south pole, where ancient impact basins have lifted mountains that dwarf Mount Everest," Colaprete said.

The sun, just barely peeking over the horizon, creates shadows of those mountains that can stretch hundreds of miles. That could pose a problem for VIPER, which relies on solar power. So the rover will need to follow "corridors of light," Colaprete said, as shadows move across the pole.

But occasionally, the rover will dip into craters that lie in permanent shadow, areas sunlight hasn't touched in billions of years. These craters are a big reason NASA chose this landing spot, since those shadows could preserve ancient reservoirs of ice.

All in all, NASA expects VIPER to cover 10 to 15 miles (16 to 25 km) and visit six spots with different temperature ranges, where water ice could lie at various depths below the surface. VIPER will drill into the lunar surface to find that ice.