NASA has released a whole new set of Pluto images that were taken by its New Horizons spacecraft during its historic fly-by in July, and these things are spectacular. While we don't get them in colour, we do get to see in incredible detail the unexpected complexity of surface features in regions such as the chaos terrain, Cthulhu Regio, and the Sputnik Planum.

"Pluto is showing us a diversity of landforms and complexity of processes that rival anything we've seen in the Solar System," New Horizons principal investigator Alan Stern told the press. "If an artist had painted this Pluto before our flyby, I probably would have called it over the top - but that's what is actually there."

Since last week, New Horizons has been delivering a bunch of new, high-resolution images from the fly-by - a process that's expected to take an entire year because of the spacecraft's dismal download speeds. According to NASA, the images it's been delivering over the past few days have more than doubled the amount of Pluto's surface seen at resolutions as good as 400 metres per pixel, revealing what looks like nitrogen ice flows, valley networks, sloping dunes, and mountains strewn chaotically across the surface in a manner reminiscent of Jupiter's moon Europa.

"The surface of Pluto is every bit as complex as that of Mars," said Jeff Moore, leader of the New Horizons Geology, Geophysics and Imaging (GGI) team. "The randomly jumbled mountains might be huge blocks of hard water ice floating within a vast, denser, softer deposit of frozen nitrogen within the region informally named Sputnik Planum."

Check out the images below, and head to the gallery pages here and here to see more of what New Horizons has delivered so far. 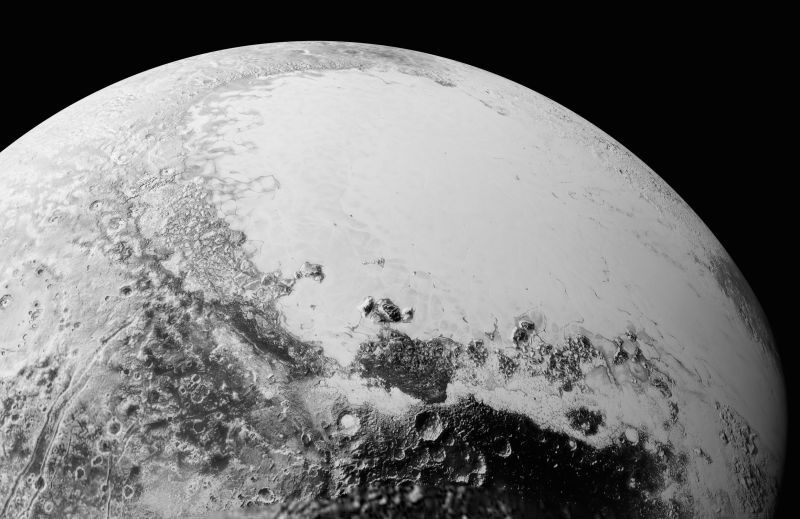 This overlook image shows what you would see if you were hovering about 1,800 kilometres above Pluto's equatorial area, looking over the dark Cthulhu Regio toward the bright, icy plains of the Sputnik Planum (both informal names). The area you can see here is about 1,800 km across. 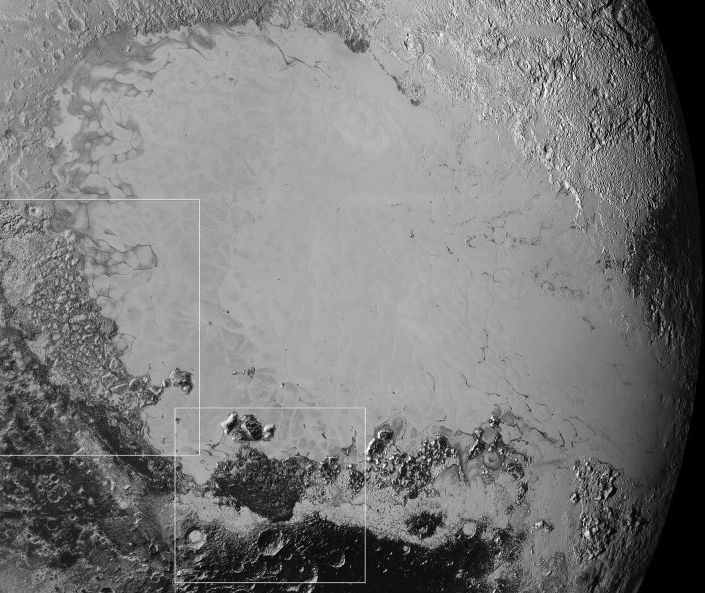 This image is made up of a mosaic of high-resolution images taken at 80,000 km away, showing the Sputnik Planum icy plain running through the centre. Here we can see how incredibly varied the landscape is in this area, with the smallest visible features stretching just 0.8 km in size. The two white rectangles have been imaged separately - chaos region and dark areas - which you can see below for even closer views. 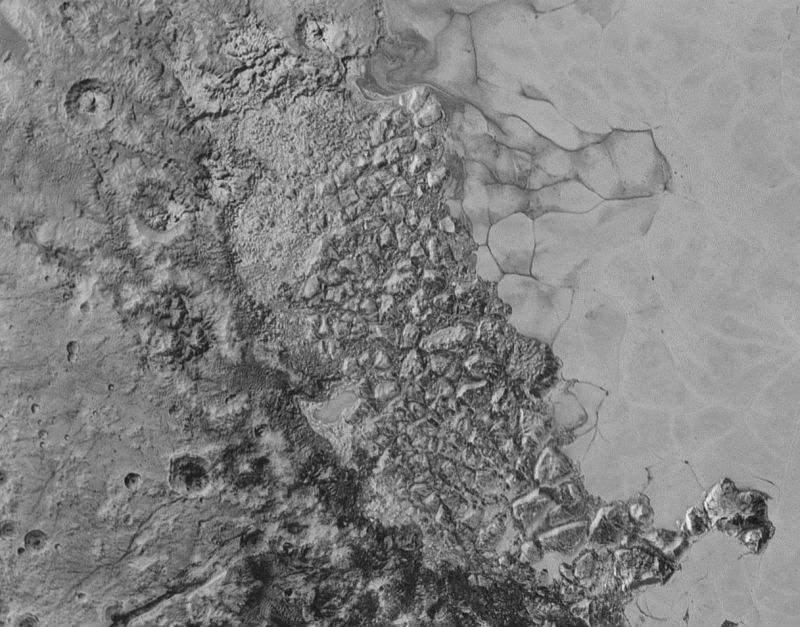 In the centre of this 470-km wide image is the so-called chaos region of Pluto, characterised by its jumbled, broken terrain. 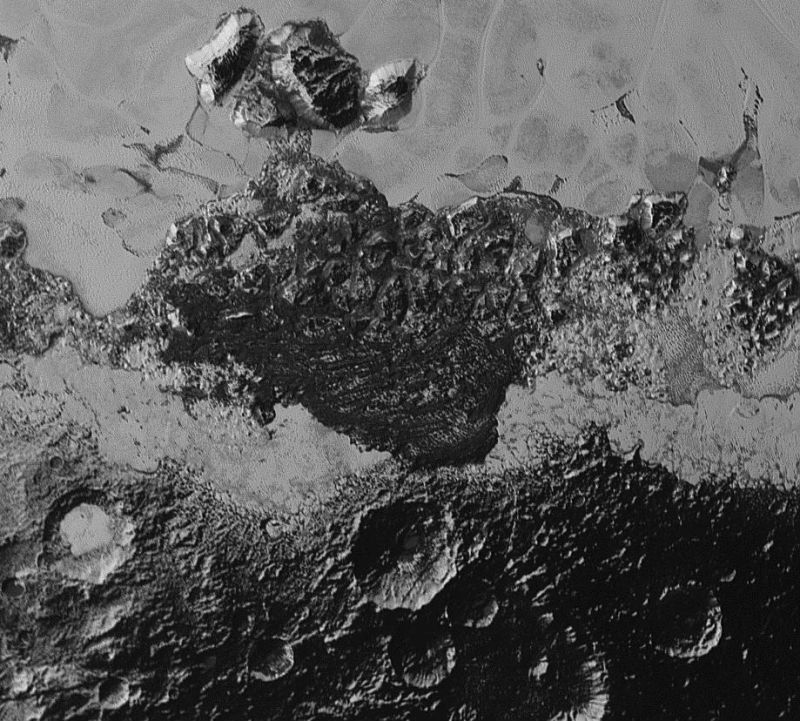 The image showcases the sometimes dark, heavily cratered terrain that breaks up much of the smooth, icy surface of the dwarf planet. 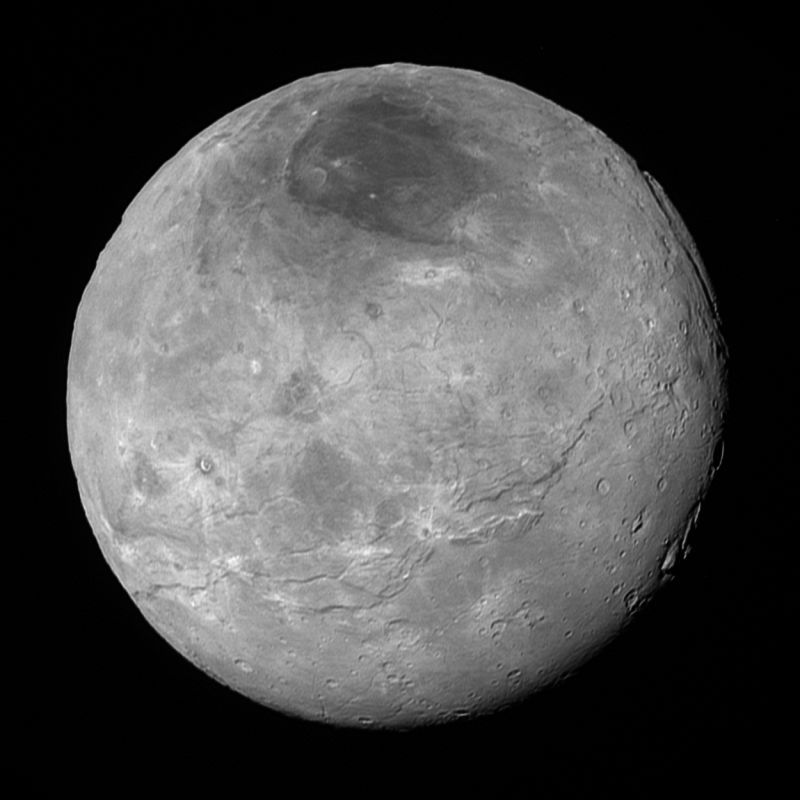 Pluto's largest moon Charon, taken by NASA's New Horizons spacecraft 10 hours before its closest approach to Pluto on 14 July 2015 from a distance of 470,000 km. Charon is just 1,200 km in diameter, but boasts a surprisingly complex geological history, says NASA, including a conspicuous dark north polar region at the top of the image.